Getting Bluster’s Engine Out 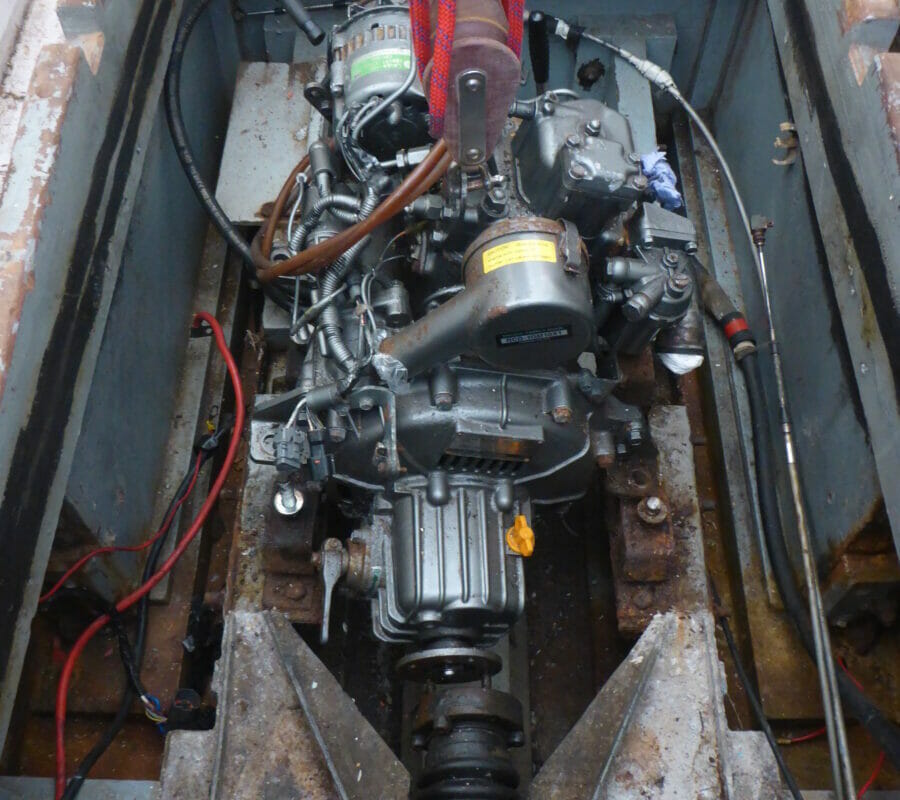 Bluster currently has a Yanmar 1GM10 diesel engine, a replacement for the Volvo Penta that she previously had. It has been fairly reliable, but the paint was peeling off the lower half due to excessive amounts of bilge water at times, one of the rubber mounts needed replacing, and the water pump needed rebuilding. The bilge under the engine could also do with being cleaned and painted, and and  something needed doing about the very rusty engine bearer steelwork. Consequently, it was decided to take the engine out.

Fortunately there is just room in the tent she is in to lower the engine to the ground adjacent to the boat. An overhead gantry was rigged from a steel beam (later to be used to lift her off her trailer) and two substantial timber planks. Her mainsheet blocks were used to make a hoist, and a temporary cradle to support the engine when out of Bluster was constructed out of scrap wood.

Disconnecting the various pipework and electrical connections from the engine was straightforward, but the nut on one of the mounting bolts was seized and had to be cut off. Fortunately, this was the one on the damaged rubber mounting.

The lift went OK, but a purchase of more than 5 to 1 would have been better. The suspended engine slid across the boat thanks to the rollers made out of dowel, and the engine was lowered down on to its cradle. To drill the holes to bolt it down necessitated moving the engine around a bit; they should have been pre-drilled. The engine was then wheeled to a shed to be worked on.

2 thoughts on “Getting Bluster’s Engine Out”