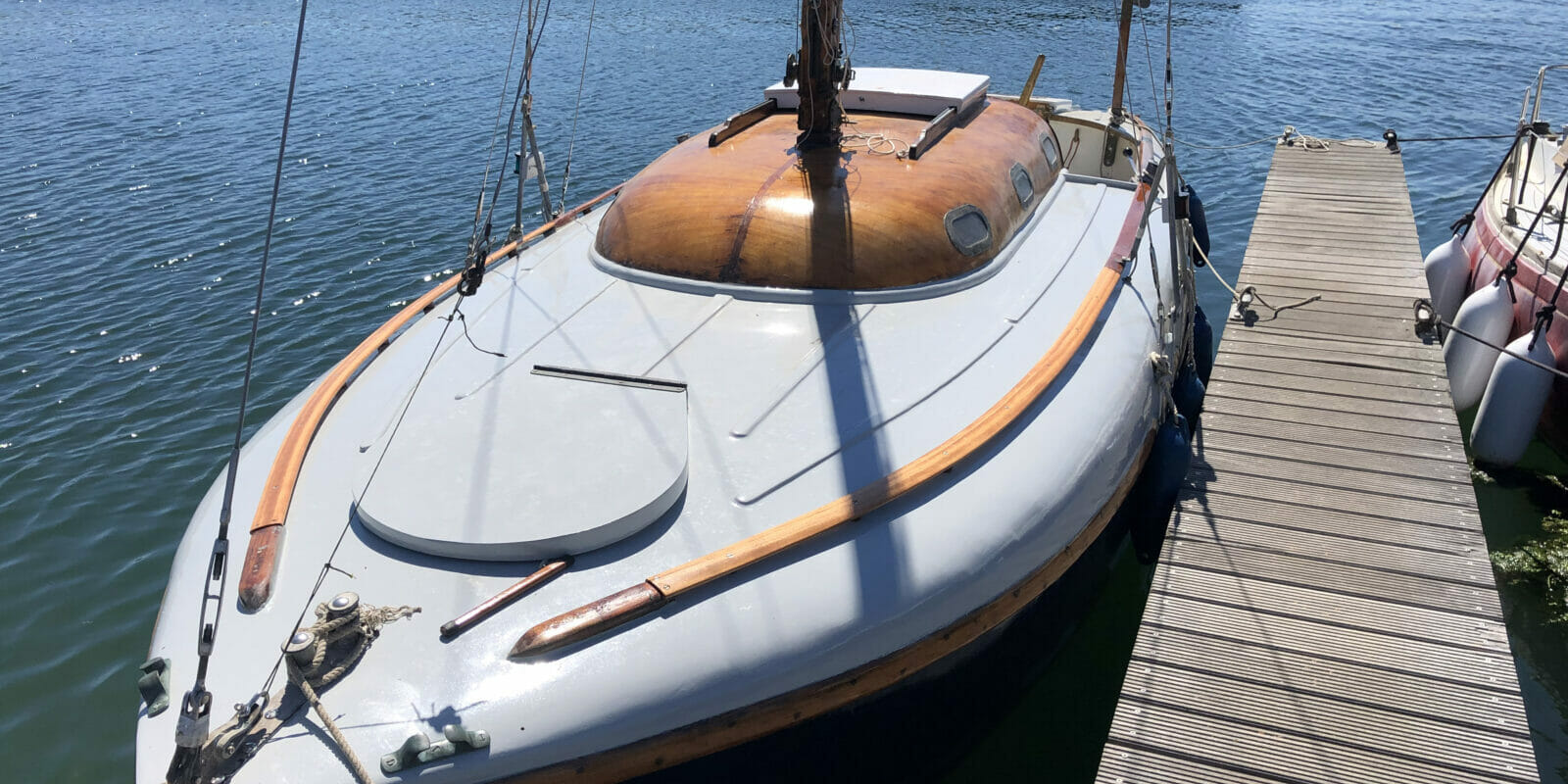 The Uffa fox event was the perfect excuse for me to finally address the top-sides.  Mary was in good condition when I took over her care.  But the paint had definitely gone powdery and lifted in places. Maintenance, like the tax man and must be paid.

I have not been looking forward to this but the prospect of a sail in company to the IOW was the push I needed.  Probably because it generates the help and focus I can get from you guys.

I always find knowing the correct ‘depth’ of repair a bit difficult.  Too little and it may not be worth doing.   Too much and I won’t make the deadline.  Do I fix the through decks, do I take off the tow rails?  Or do I even just slap on some masonary paint, it has deck grip in it and is very flexible.

I decided on the long term repair, take the tow rails off and repair the through decks.  I also wanted to minimise the deck fittings.  A light sand for a new coat of paint in a couple of years will be a lot easier if I don’t have to sand around fiddly bits.

I started at the read and found that trying to sand through the paint was hard work and as there were a couple of different layers some sanded quicker than others.  The paint in the shoulders was a white and the decks was an international blue deck paint.  The deck grip was difficult, the paint is hard and full of grit.

Forward of the cockpit I used that a heat gun worked really well at lifting the white paint but I had to sand the deck paint.  I believe the paint was International and I have moved to Epifanes, no particular reason.  I used their primer, and found their fairing compound easy enough to use too.  If I understand correctly the fairing compound is glass balls suspended in epoxy resin.  I am not sure of its long term flexibility, I guess I will see.  But a set of digital kitchen scales is an absolute must.

Once I put the primer coat on, I thought the grey brought out the varnished wood better than the original colours.  I also thought the different colours for shoulder and ‘deck’ were complex and added overhead for things like tapeing and swapping paint rollers.  So I opted for a single colour, and probably quite gullibly opted for what seems to be the colour dejour for electric cars.

Due to some time constraints and deferral of decision making, I have not used deck grip.  It is contentious and a safety issue, but I avoid going on deck and will use the fore-hatch.  But not having deck grip may be very serious.  I think I will mix some with the paint and use it on the raised strips.  I find deck grip holds the muck and hard paint will not be flexible enough. But on a dewy morning the shiny decks are quite treacherous.

Ultimately I want a softer paint that after a couple of coats, in 10-15 years I can lift off easily with the heat gun.  I am hoping the undercoat is harder and prevents damage to the wood.  In this way and with few fittings it is not too difficult a job.

I am also happy to have gone through the shroud bolts and replaced these.  Seeing rusty streaks inside the cabin and wondering if the bolts are a shadow of their former selves is unsettling.   I also had somebody build new tow rails this was expensive but saved me time I didn’t have.  I also had a nasty split in the mast which I was concerned about.  So true to the old “oh and while you are there can you also ….” I managed to get this fixed.

It was a very close call as to whether I could make the Uffa fox event and if it hadn’t been for the boat yard I wouldn’t have.  Truth be told I had been talking to “the yard” since at least March but I guess this is all part of the adventure of boat ownership.

But all of this hardship paid off as I had an awesome adventure this year.  As usual I am very grateful to those who shared in this and made it happen.