Mourne Goblin on trailer ready to go, the tow up to Inverkip completed sucessfully in about 5 hrs arriving about 23:00 slept on board.

Up early to prepare for lifting in using the travel hoist, weather kind with blue skies, last minute jobs completed including fitting an outboard block to transom.

Lifted in mid morning no leaks to speak of motored to berth in marina to await the arrival of the crew Karen (the other half novice), Yvonne (my sailing partner), John (Yvonnes other half novice), Alice (Yvonnes daughter 9)  who were all travelling up that evening after work.

Weather sunny, wind force 3 short sail down to Largs order of day after crew have watched the Royal wedding.

Set off under genoa early afternoon broad reaching towards Largs the idea of the weekend was to introduce the other half to the joys of sailing so short passages with plenty of socialising needed.

As we made our way past Wemyss Bay the wind was coming round making us sheet in still under genoa the wind was also increasing time to take a roll on the foresail to keep things nice and calm, more wind 2 reefs finally as we entered the Largs Channel all sail was taken off and we motored under bare poles still with a good heel on. Some Friends were sailing up the Kyles of Bute at the same time in their Elizabethan 30 under reefed Genoa and their wind instruments registered force 8 at which time they and a couple of boats near them broached.

Arrived at Largs to a very windy approach into the berth at this point I realised why we were heeling so much under bare poles you must remember when launching to put down the keels fully!!

Forecast not good force 6/7 but sunshine so a day in port was had allowing the girls to shop and me to spend at the chandlers and continue with the maintainance.

Wind dropped to a reasonable force 3 left Largs bound for Kip a great sail in sunshine, evening spent in Kip with a meal ashore at the Chartroom.

Short motor back to Gourock to the mooring. The weekend was deemed a great success with Karen planning further trips to Scotland

My delivery trip to Cork for friends Elizabethan 30 in May had to be cancelled due to consistant force 8-10 winds forecast in the Irish sea reading Left for Dead (an account of 79 Fastnet) on the train to Edinburgh probably not the best choice excellent book though recommend it to anyone its amazing what a boat and crew can survive.

Next organised trip Week in beginning 6th of Aug in company with Rosie Keeping Elizabethan 30. Plan to do Lamlash-Glenarm-Gigha-Cambeltown-Colintrieve if the weather is kind to us. If your around the area get in touch and well try and meet up.

The interesting thing about sailing is how you need to be adaptable and go with the flow changing plans with changing circumstances which may be caused by the weather or a multitude of other reasons, even before weve set off were having to change the plans partly due to crewing issues and partly due to my friends having too much money and deciding to buy a new boat!! In order to facilitate crew arriving part way through the week, due to other commitments, we will now be staying in and around the Clyde, this fits in with the fact that hopefully Graeme and Pamela will have completed the purchase of a new boat swapping Rosie Keeping for a Rustler 36 so the week will be their shake down cruise learning how the boat handles etc, not something you want to be doing in unfamiliar waters.

I hope that others are managing to get some sailing in it would be good to hear of your exploits, how about starting some blogs?

Quick update currently sat in Largs marina after sailing across from Rothsey today in quite lively conditions. We arrived in Scotland on Friday evening after leaving Yorkshire late afternoon and proceeded from the Mooring at Gourock to Kip Marina to load and spend the night. Saturday we set off for Loch Goilhead sailing for a short period and then motoring as the wind dropped picking up a mooring late afternoon, evening spend on board after dining ashore with Graeme and Pamela Geddes with whom we are sailing in company for the week. Sunday dawned wet with no wind so it was along motor down to Bute to spend the night in the inner harbour at Rothsey which has probably the most ornate victorian toilets in the world. The original plan for today was to make our way up the Kyles to Colintrieve for the evening but due to the wind and the forcast that was curtailed taking the downwind option of Largs. Forecast not so good for the next couple of days 5/6 increasing 7 at times so we may have to sample the delights of downtown Largs. Plan to be in Troon on Thurs all being well.

Yesterday spent fitting new boom tent which is coming in very handy today due to the heavy rain were experiencing so its heater on (thank goodness for shore power) and books out. 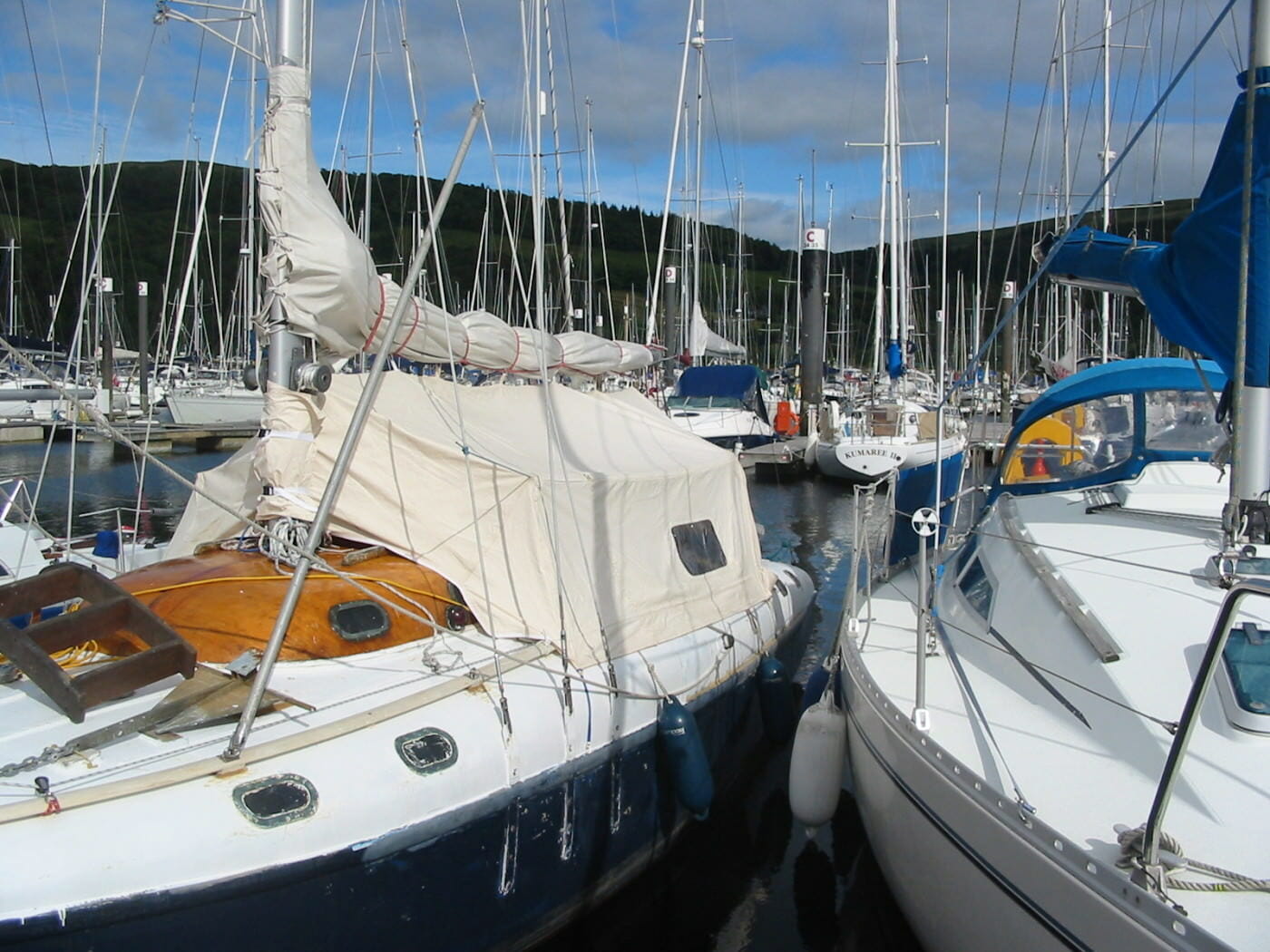 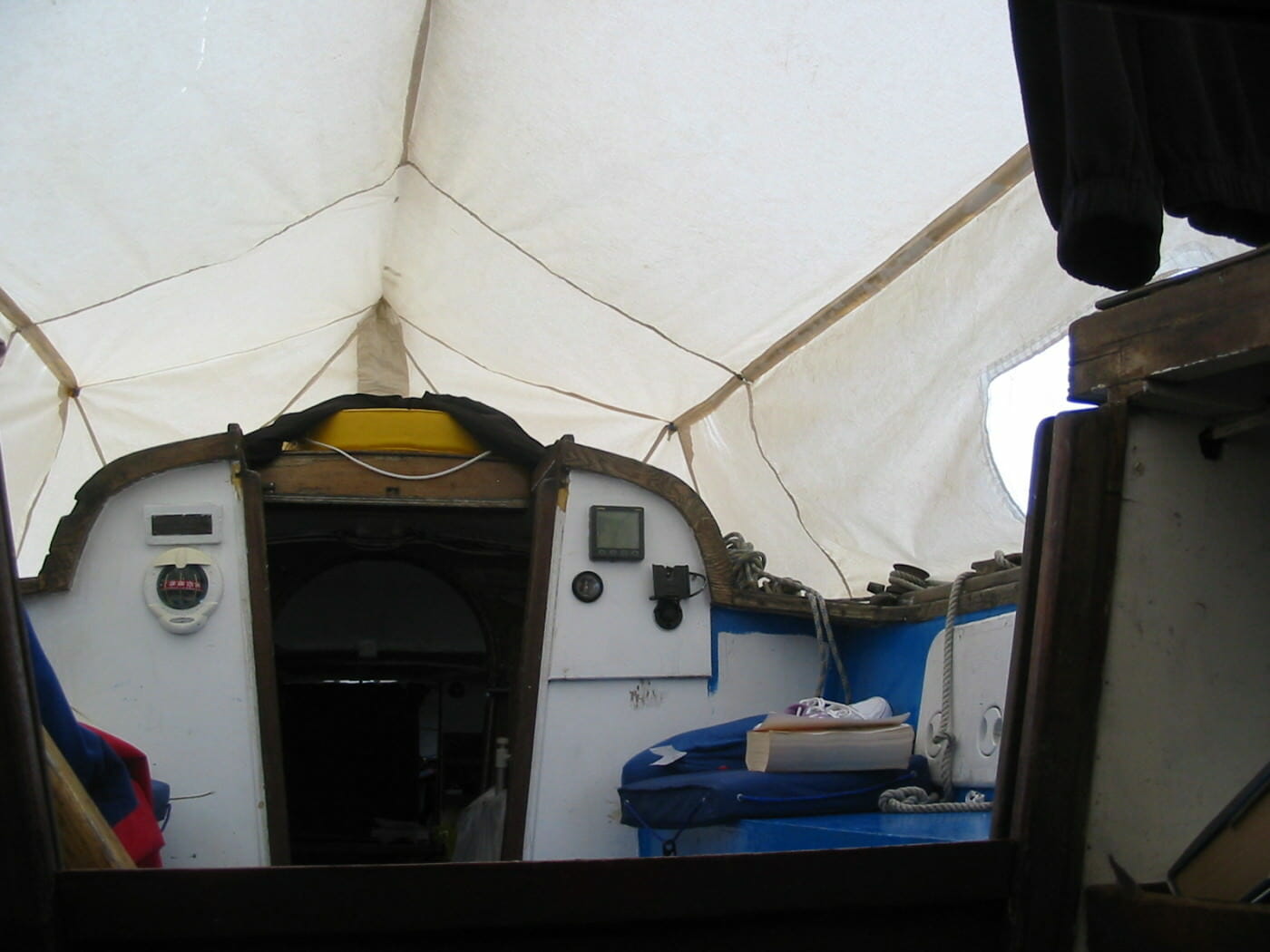 More rain moved to Kip in the afternoon in order to get closer to the mooring.

Met Trevor Thompson at Largs where he was joining Royalist for a couple of weeks shown around below decks before joining Graeme and Pamela on their “new” boat which needed the sails bending on. Afternoon spend getting Unicorn ready for sea before retiring to a local Pub for a meal along with Trevor, (Trevor, Graeme and Pamela have asked me to pass on their thanks for the help) Moved Unicorn up to Kip in the evening.

Time to return to the mooring best sail of the week achieved from Kip to Gourock romping along at 6 knots with some sun!! Despite the weather all participants declared that they had enjoyed the week roll on September when Im away again hopefully with better sailing.

Final sailing for the season organised, travelling up Mon 19th for a week around the Clyde with lift off and trail back on the following Sunday, as always if any one in area get in touch to meet up.

Im now looking at the winter list of jobs.

2 rub down and repaint topsides

3 possibly drop keels to check them over

Sat in Kip Marina high winds and rain looks like another washout, forecast not good for the rest of the week probably willlift out earlier than planned and return home for the weekend. boom tent has had another good test dont know how we lived without it. beginning to look at palns for next year which may see Mourne Goblin ashore for the summer due to other commitments looking forward to Croatia with Trevor if that comes off, and tripto Southern Ireland on a Rustler 36. The next time that A90 will probably hit the water is 2013 when hopefully Trevor and I intend to organise a rally in Falmouth around the time of Fal week, Karens getting into the idea of spending time on board so should be up for it. Looking forward to the Annual Dinner do we have a date and venue yet?

Sailing abandoned on Thursday lifted out and towed back to Yorkshire so thats the end of another season not that much sailing took place, its a good job that I get as much pleasure from fiddling as I do from sailing now I need to find some cheap under cover storage for the winter.