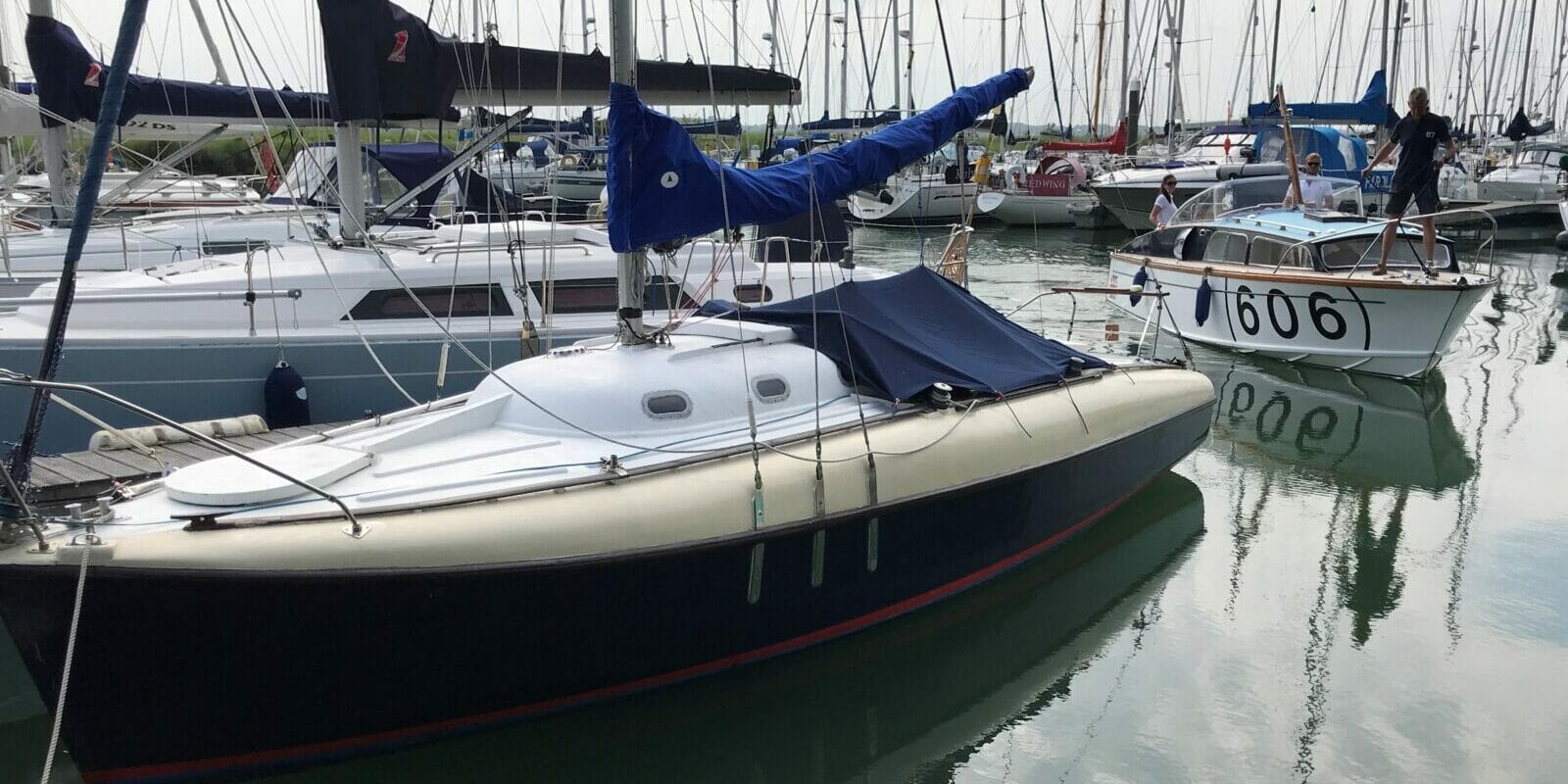 A89 Colchide attended the 2021 Suffolk Yacht Harbour Classic Regatta over the weekend 25-27 June.

This Regatta encourages both motor and sail boats and this year was graced by half a dozen Fairey Huntsmen. As part of this year’s regatta there was a procession of 6 FAIREY Huntsman motor cruisers. At the end of racing on Sunday afternoon, I invited Louis to bring his immaculate Huntsman alongside FAIREY Atalanta Colchide.

A89’s crew on Saturday was Alistair Rodger (A104 Atalanta Mary) and Al Sadler, a friend.

In the search for more speed I had spent much of Friday finishing the fitting of A154’s donated keel slot boards, which lower with the keels to close the open keelboxes flush with the hull. (See 2020-21 Annual Bulletin). Initial motoring trials were very positive, but the weekend’s racing was to be the real test.

On Saturday morning on the way to the start line with just 3 kts of wind, we lost all drive. There was crew talk of the prop dropping off, as there was no prop wash behind us, even at max revs, forward or reverse. We raised and lowered the keels, but still had no drive. The race was abandoned due to lack of wind and reset 5 miles further out to sea, where the wind was reported to be as much as 6 kts. However, there was no way we could make it, so we retired. It was time for me to have a dive under Colchide to investigate the problem. The crew skilfully took us to a vacant buoy, whilst I stripped off, put some work gloves on and prepared fresh clothes and a towel post dive. The crew held a safety line round my chest and I dived down to find 14 inches of brown kelp surrounding and wrapped around the 14 inch prop.  A couple of dives later in the 15 degrees water and strong tide and I had pulled all the kelp off. A quick check of the engine proved we had cured the problem. We went for a sail up to Pin Mill, found a buoy, had lunch then returned to SYH.

On Sunday, the forecast wind was north easterly 22mph, gusting 28 mph. The fishermen in SYH always warn people that north easterlies there are always much stronger than forecast. We got to the start line in good time and registered, then sailed to the lee of a huge MSC boat for protection from the wind. We spent 20 minutes adjusting the height of the foresail, to give us better visibility, then put one reef in the mainsail. Many boats followed suit. Perhaps we should have been more cautious and put 2 reefs in and partially furled the fore sail there and then.

We started the race and were in the middle of our fleet nosing out beyond land at Langstone Point, when the shallow sea got really choppy and the wind increased again. That’s when boats started retiring, first one or two boats, then another 5 – 10, then some fast fleet experts retired too. Jim and I were working hard to keep course and regularly had to dump the main sail when weather helmed. We discussed putting in another reef, but it was so choppy, we decided it was too risky in the ever worsening conditions. We partially furled the fore sail, then furled it more, which balanced the boat better. More boats retired and we were hoping they would shorten the course, as by then we were mid fleet. After more than half of the fleet retired, they abandoned the race.

Colchide recorded 7.5 kts in slack water having just fitted the keel box sealing boards from Deannie. Guess the sealing boards work! We actually saw 7.6 kts at one point and we held over 7 kts for some time.