Repairing the Split in the Topsides 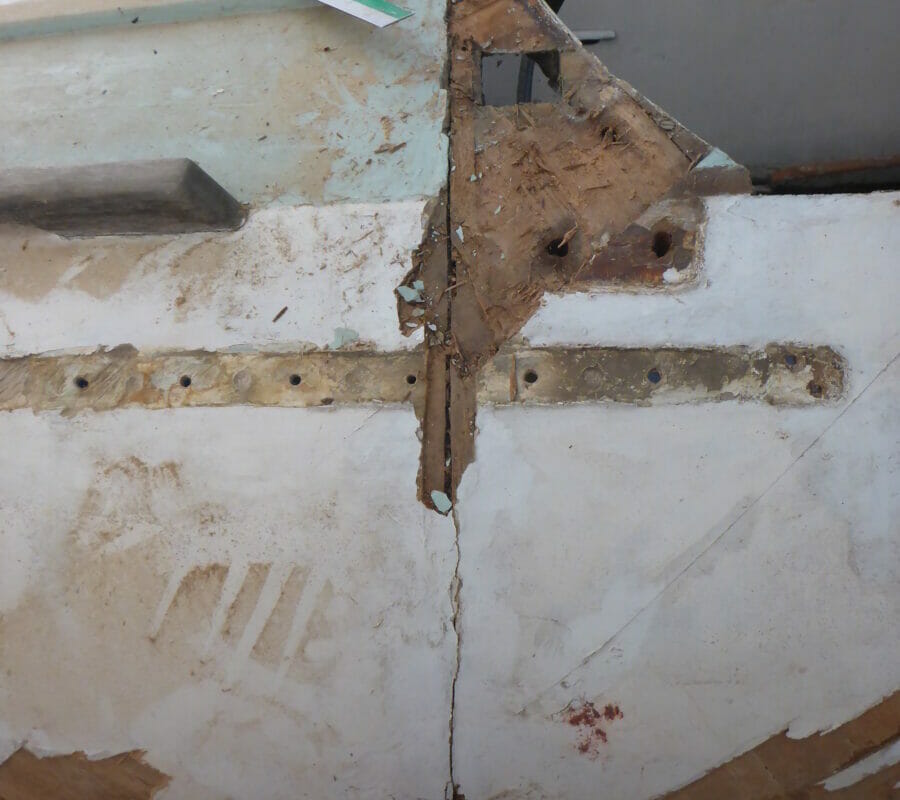 As reported in Bluster’s last blog post, there was a worrying split in the topsides at the starboard aft end of the cockpit where the aft deck moulding is joined to the one at the side of the cockpit. To repair it, the laminates were stripped back to good wood, leaving approximately one inch overlaps for the new Agba laminates. After stripping back, it became clear that the stringer running along the cockpit edge (under the deck moulding edge), and the equivalent stringer under the aft deck, were both loose from the aft cabin bulkhead where each terminates. The boat could have been made much stronger if this stringer had been continuous or made with a scarf joint instead of just being glued into an oversized rebate in the bulkhead or the frame attached to it.

To rectify this problem, the holes were sealed with masking tape and epoxy glue was poured in to fill up the voids, and hopefully also fix the stringers in place.

The hull laminates, all four of them, were also rotted at this point, probably just by rain water getting under the rubbing strake but no doubt aided by the split in the deck above.

The edge of the deck had also rotted where water had got in down the side of the cockpit coaming, and then having access to the end-grain of the deck laminates and the imperfectly fitted and glued laminate butt joints, had trickled down the inside of the deck damaging the wood.

Replacing the first layer of laminate is always the tricky one as there is nothing to staple it too at the edges, but once it is in place it can be faired with a chisel ready the receive the next layer.

I intend to fashion some solid one inch Sapelle to make the cockpit corners before covering them with Agba laminates so that the guardrail stanchions have something solid to be bolted to.

Having fixed the deck split, I am continuing to work along the starboard side where the wood under the rubbing strake has been damaged all the way to the bow.

2 thoughts on “Repairing the Split in the Topsides”