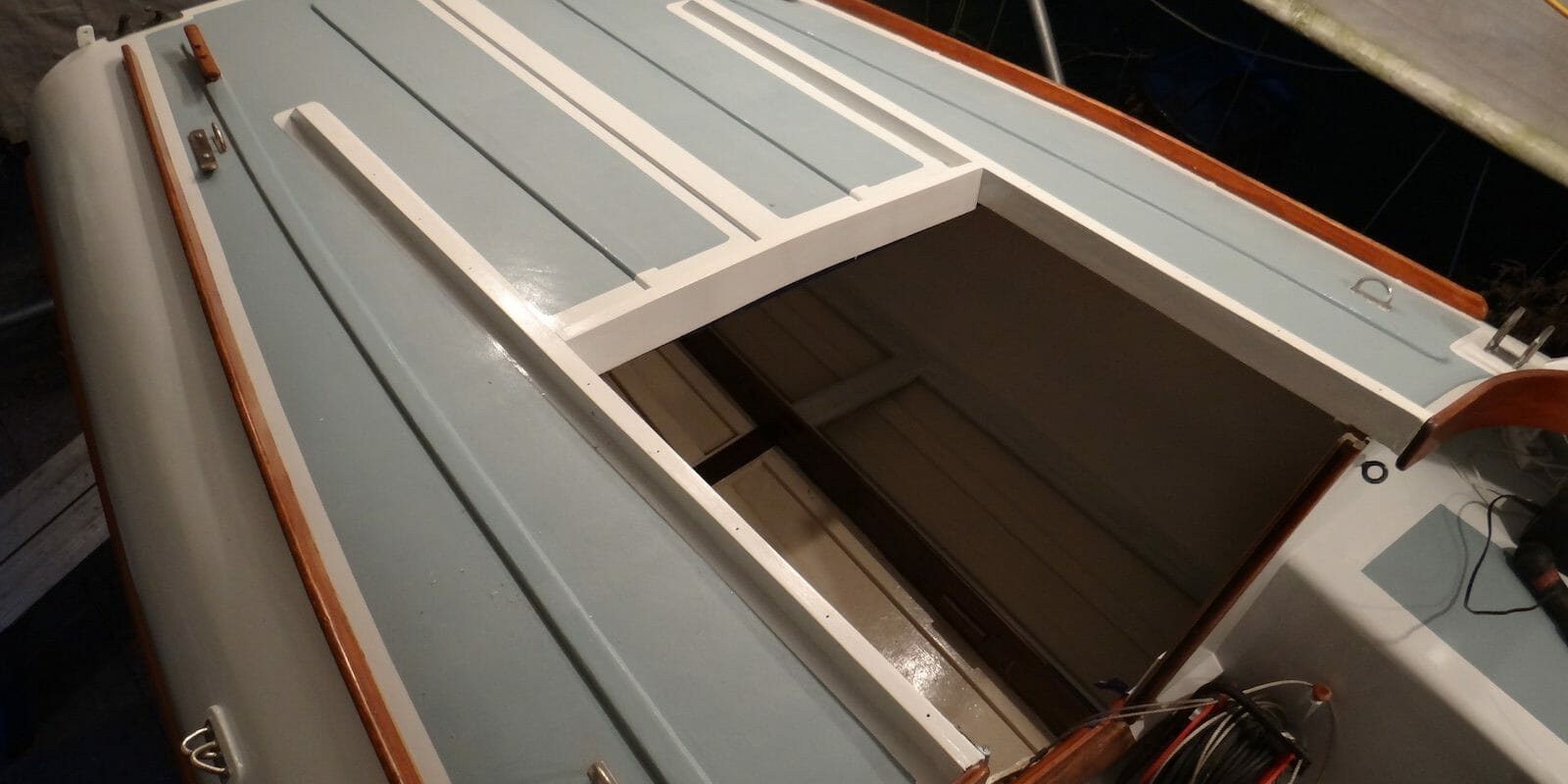 The decks appeared to need some paint. Sadly on investigation it turned out that areas were delaminating and that the stern deck on the starboard side had been badly repaired in the past and was shot! The deck framing, although not generally rotten, was also weak and at some point a post had been put in centrally to support the deck. I decided to put in new ‘hoop’ frames, add additional deck beams fore and aft and replace all of the rotten timber. It has been a great success and you could hold parties on the stern deck now without fear of collapse. 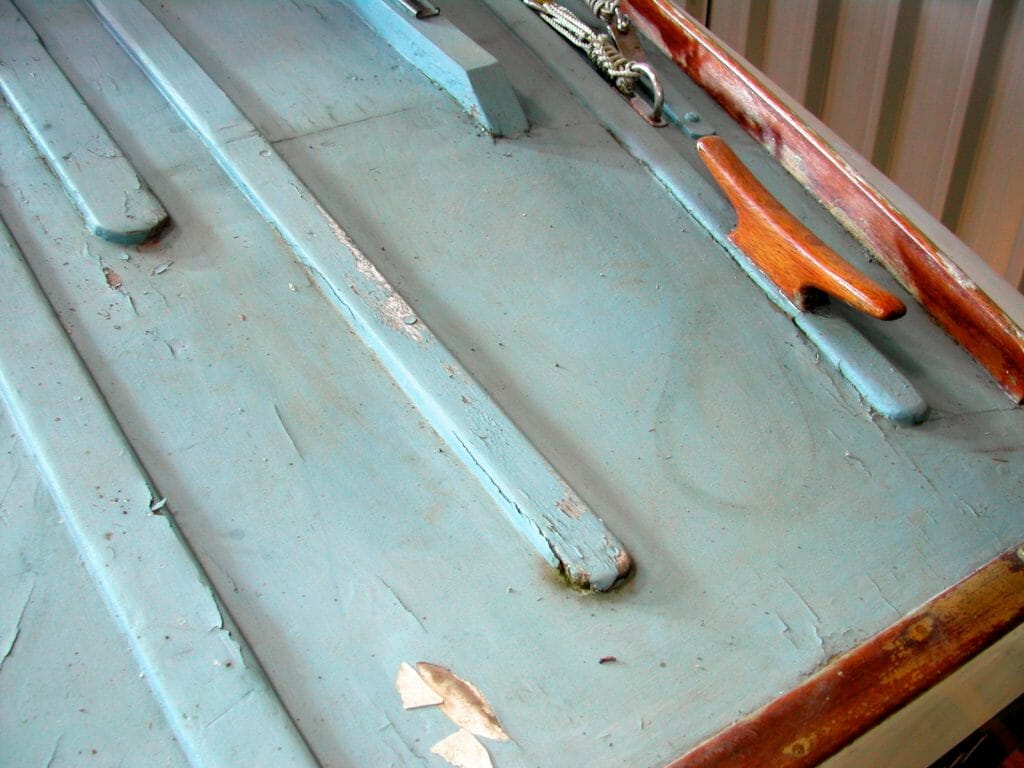 A124 The deck looked a bit ropey with some delamination and some poorly executed additional stiffeners. 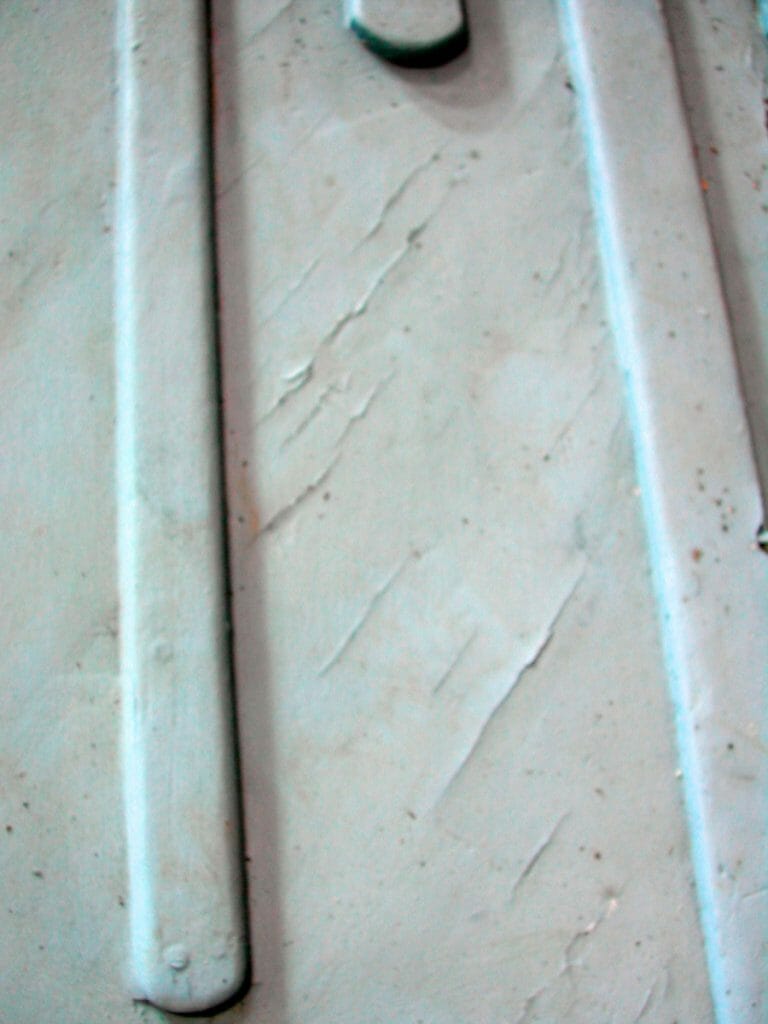 A124 The cracks weren’t just in the paint. 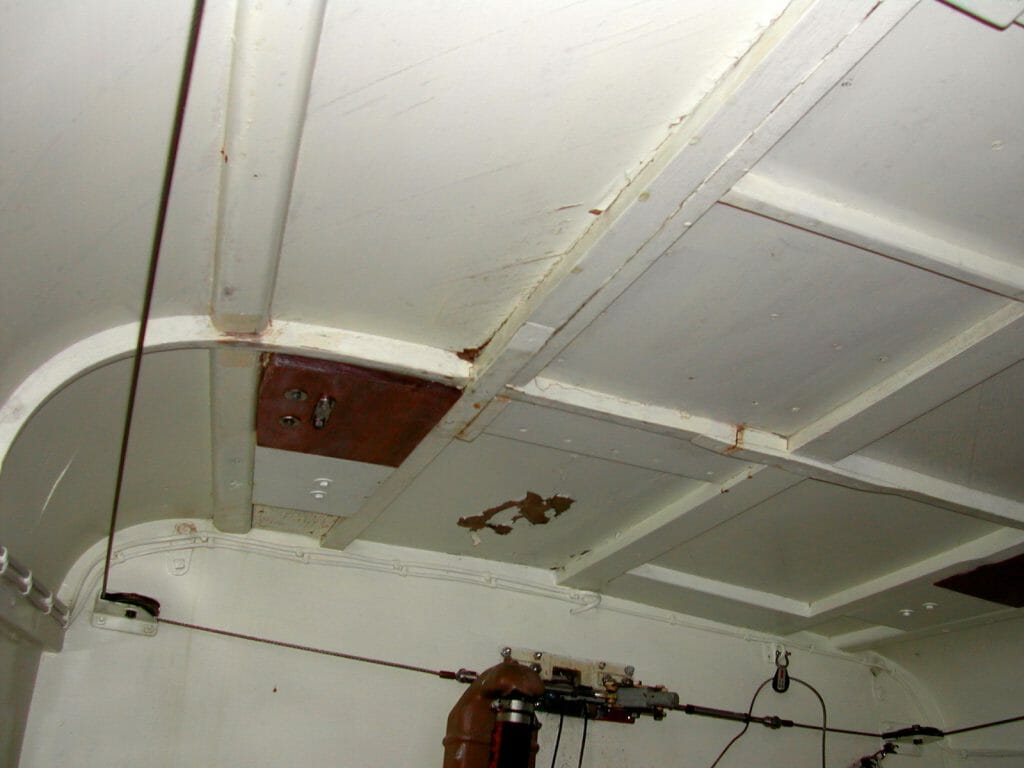 A124 The underside of the rotten deck with weak ‘doublers’ and evidence of leaks. 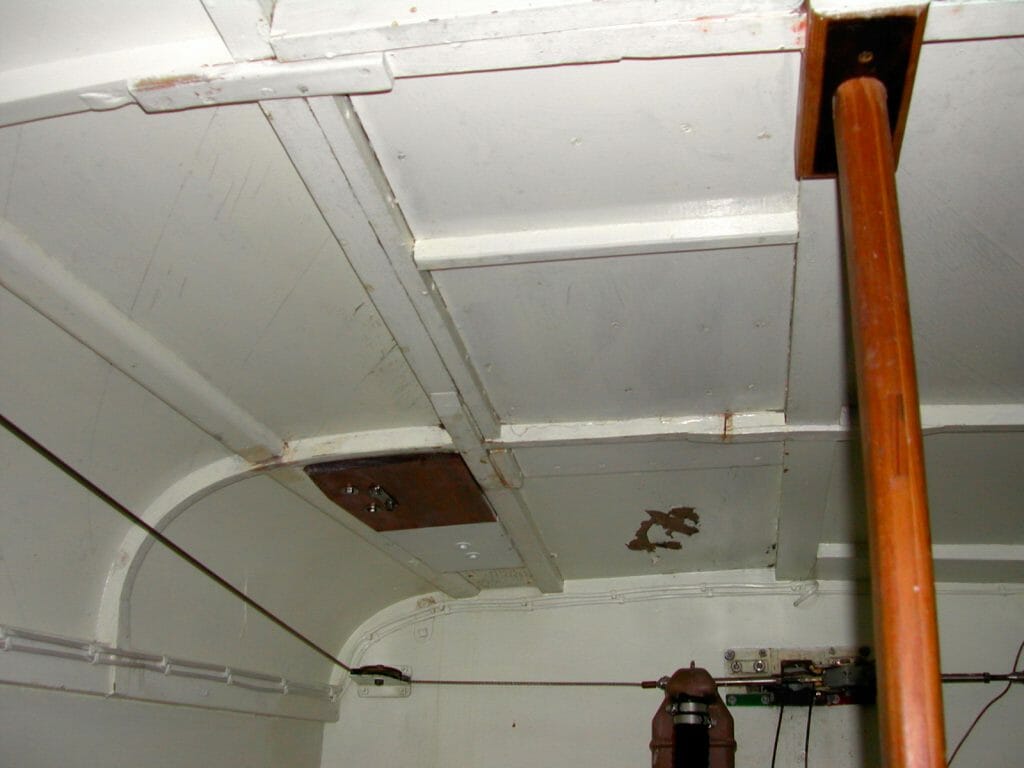 A124 The starboard deck was supported by a series of doublers and ply panels. And the whole reinforced with a hog-to-kingplank post which complicated access. 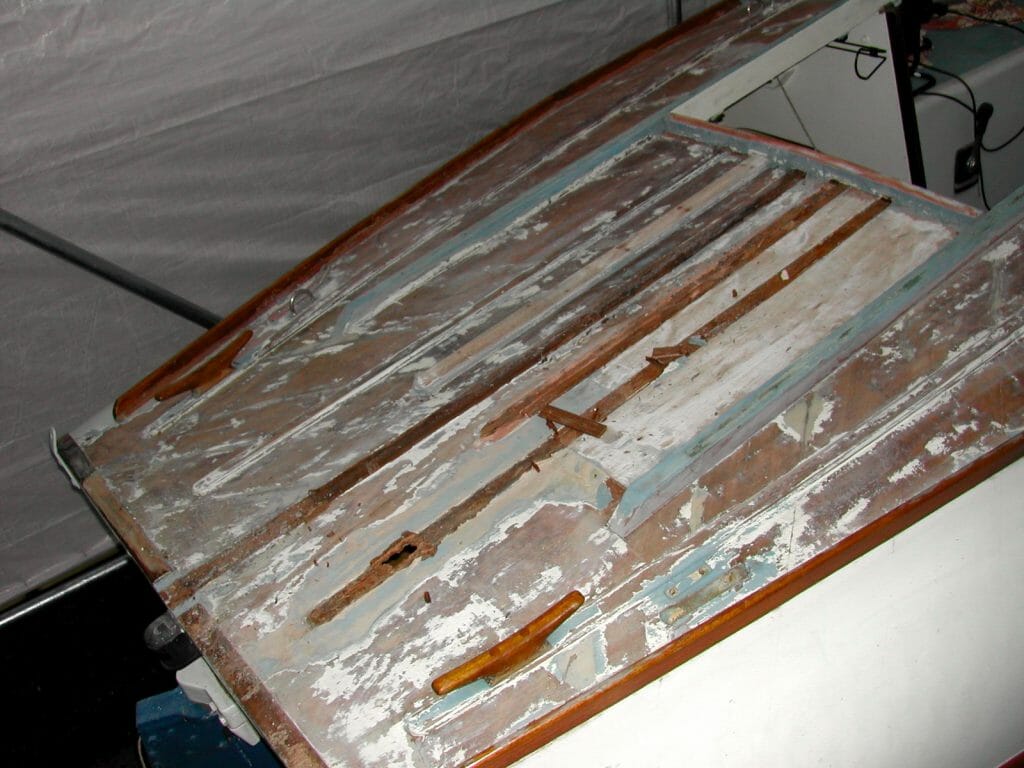 A124 Stripping the paint revealed the extent of the damage. The port deck surface delimitation. The starboard deck needed completely re-making. 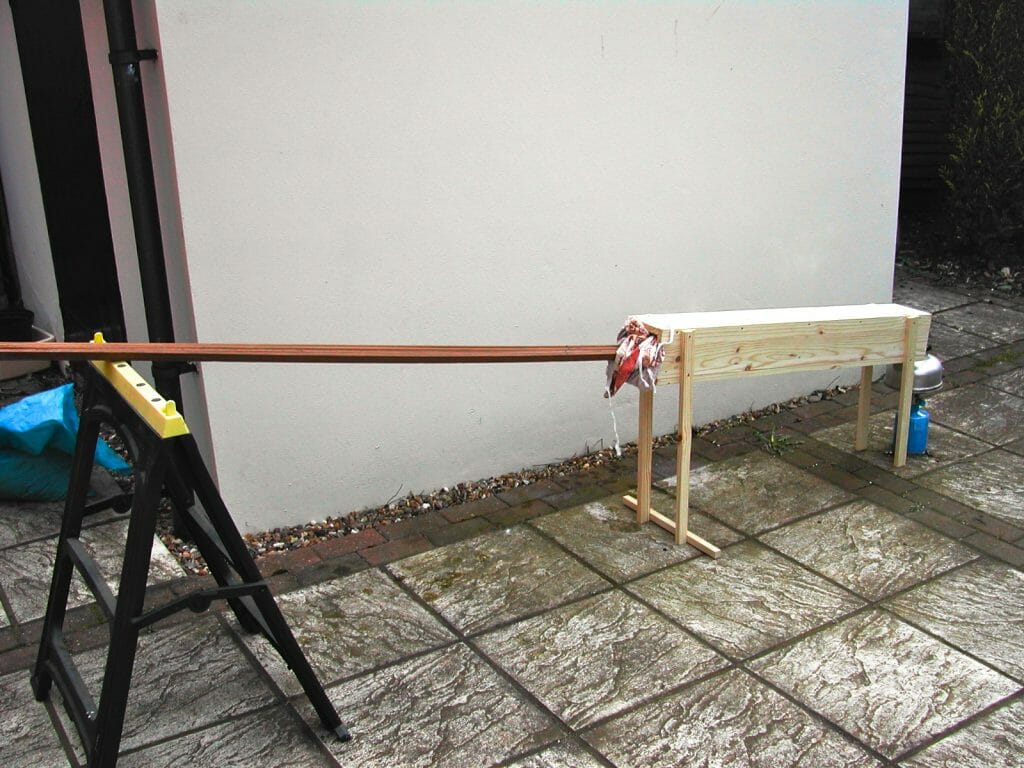 A124 These are iroko ‘slices’ in the steamer – one end on the jig at a time. The forward beam was made out of mahogany veneer left over from a previous cold-moulded project. 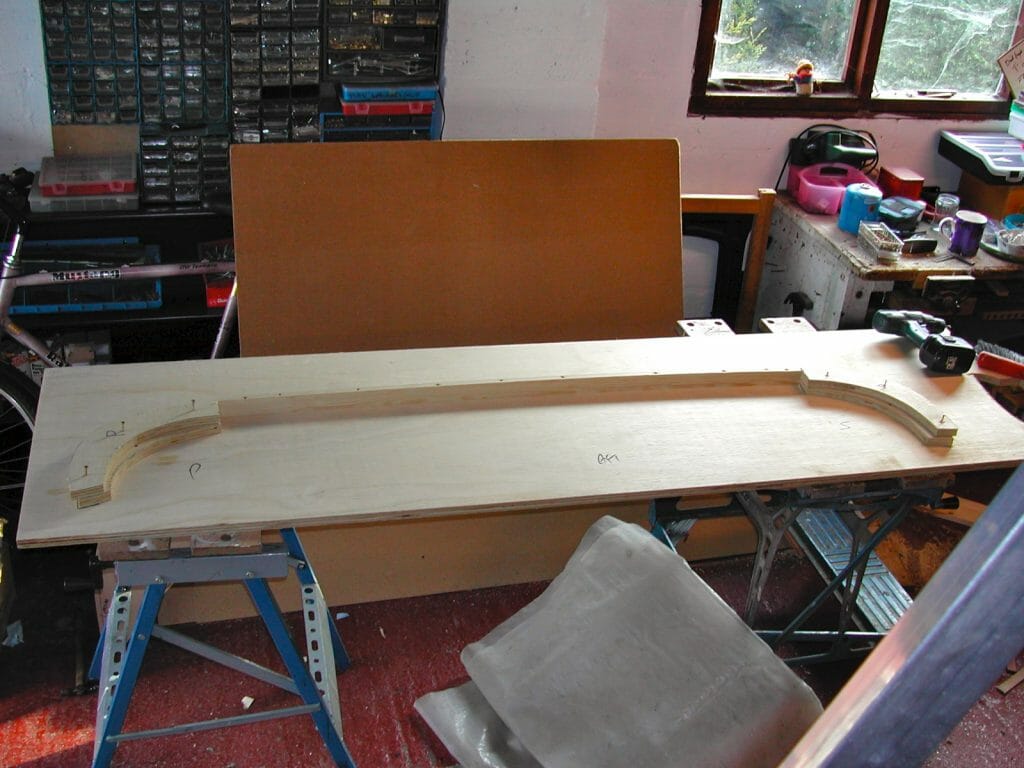 A124 I decided to laminate two ‘hoop’ deck beams beneath the existing framing, tying the deck supports to the gunwale and doing away with the need for the deck support post. Each needed its own jig. 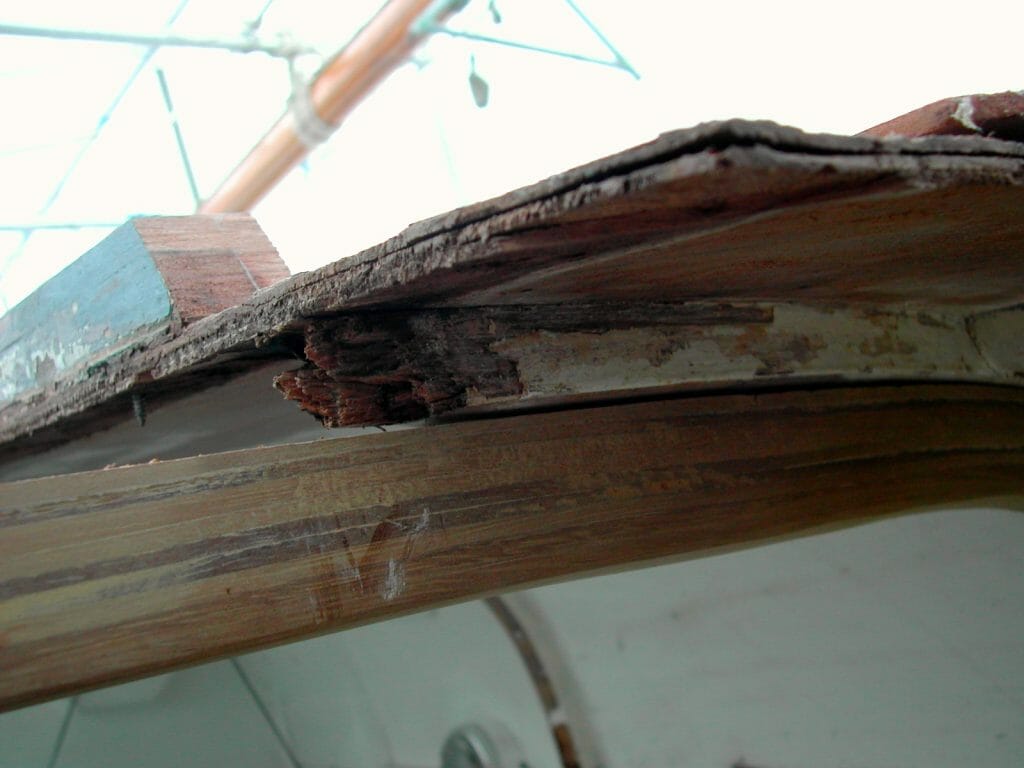 A124 A view with the aft beam temporarily positioned showing the rot in the original framing and the deck delimitation. 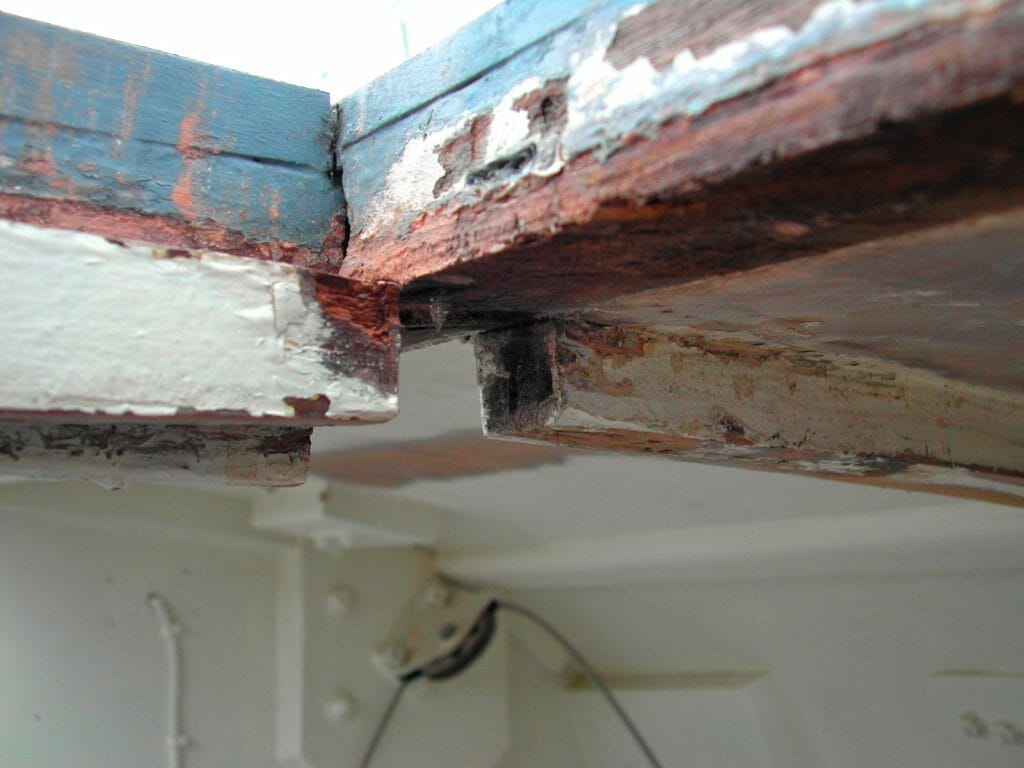 A124 The intersections of transverse and longitudinal deck ‘beams’ were very weak, and water ingress had caused some to rot. 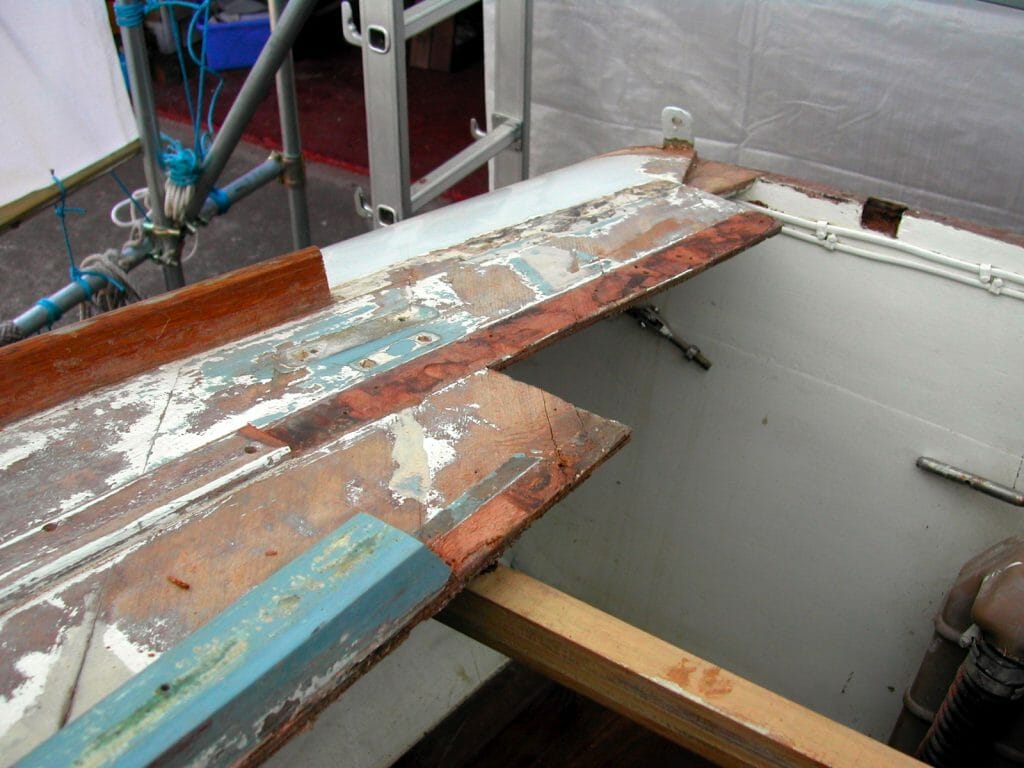 A124 The hole was cut with the intention of framing under the new edges and cutting back the top veneer to overlap with new wood. 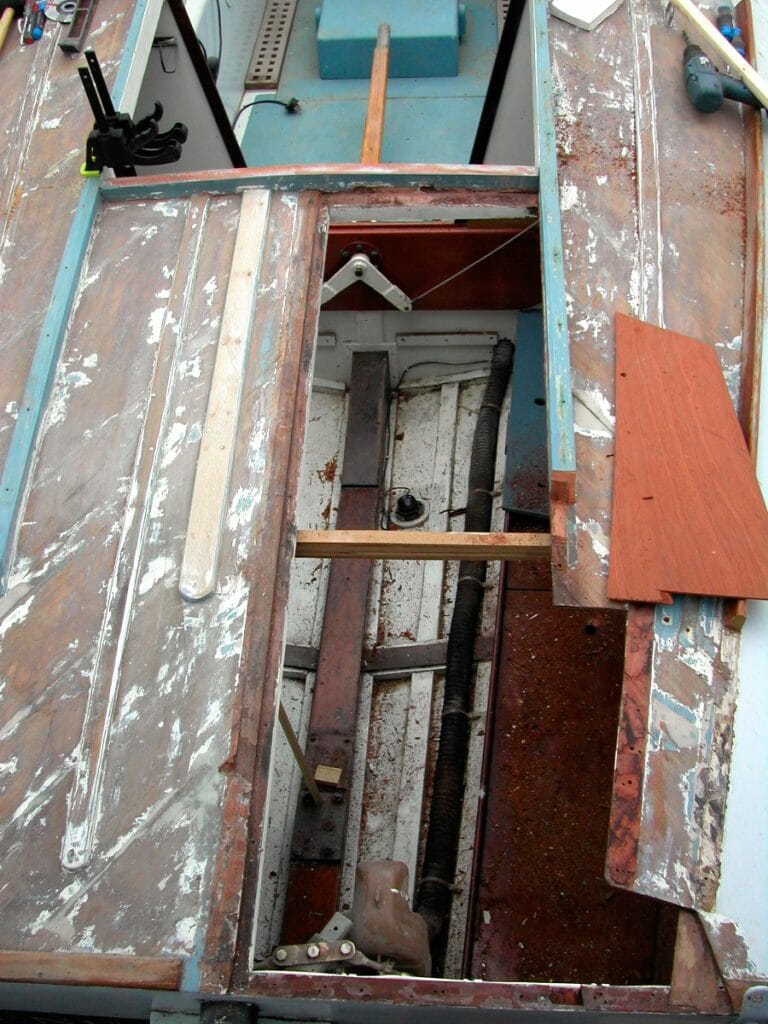 A124 Step 1 – cut out the ply repairs and back to sound laminates. 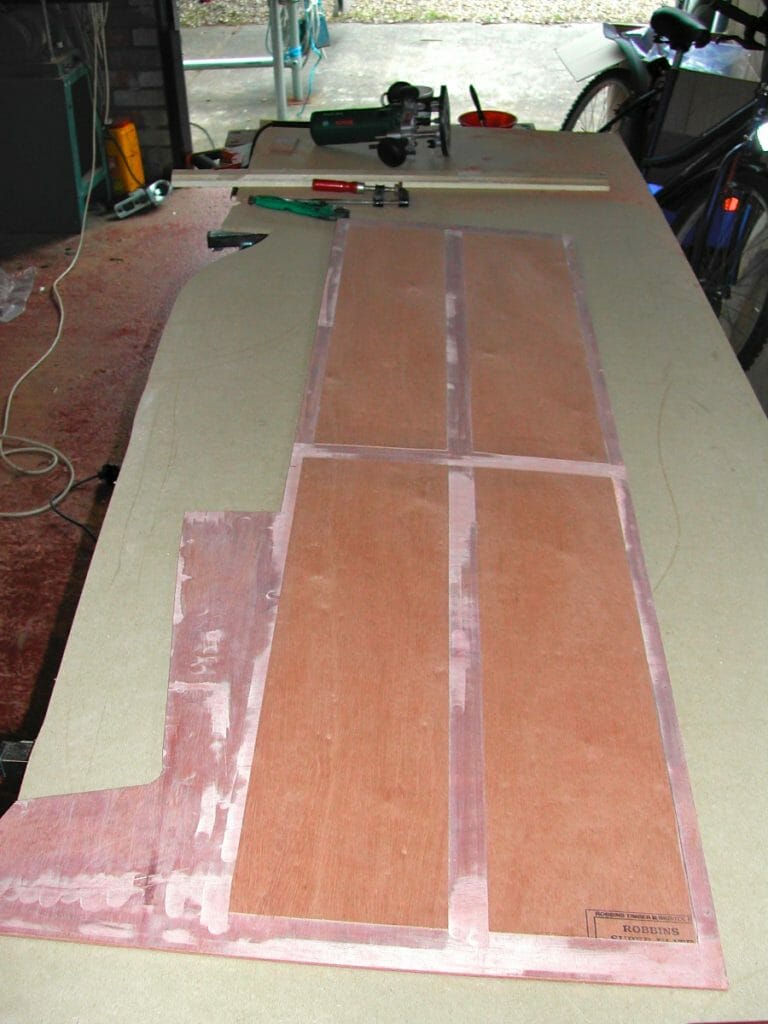 A124 And then I cheated. Rather than laminate from 3 layers of agba, I chose to lay a base of 5mm quality marine ply …. 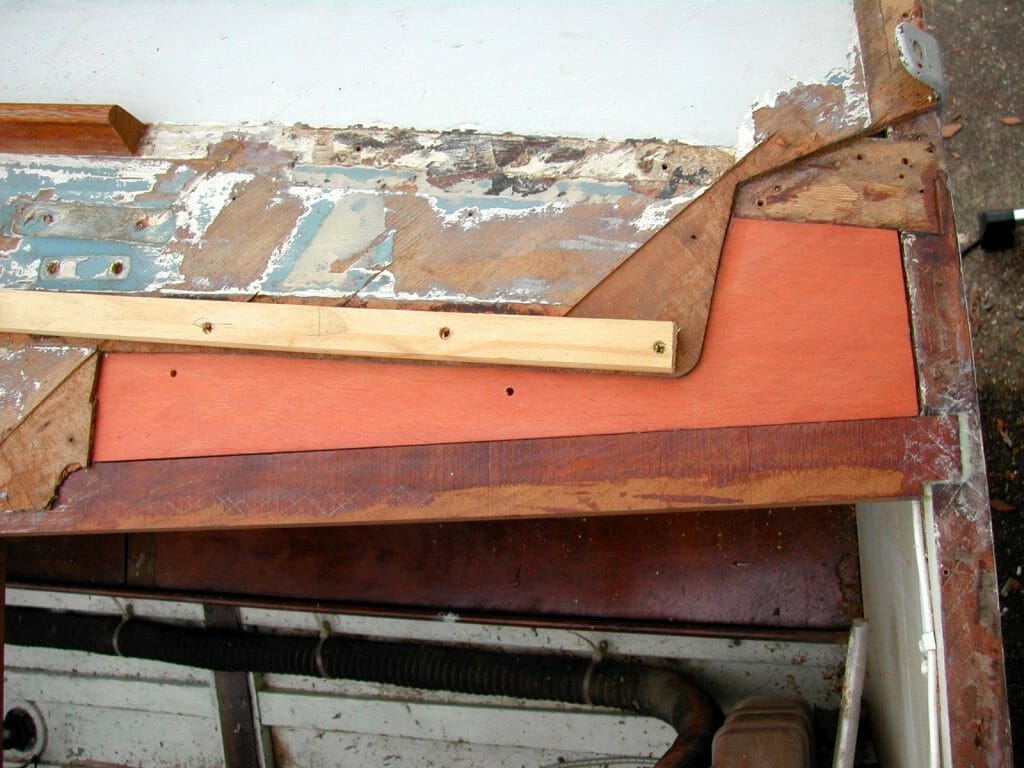 A124 At the aft end I glued a plywood panel to the underside of the remains deck, between the longitudinal framing, to support the join between old and new. 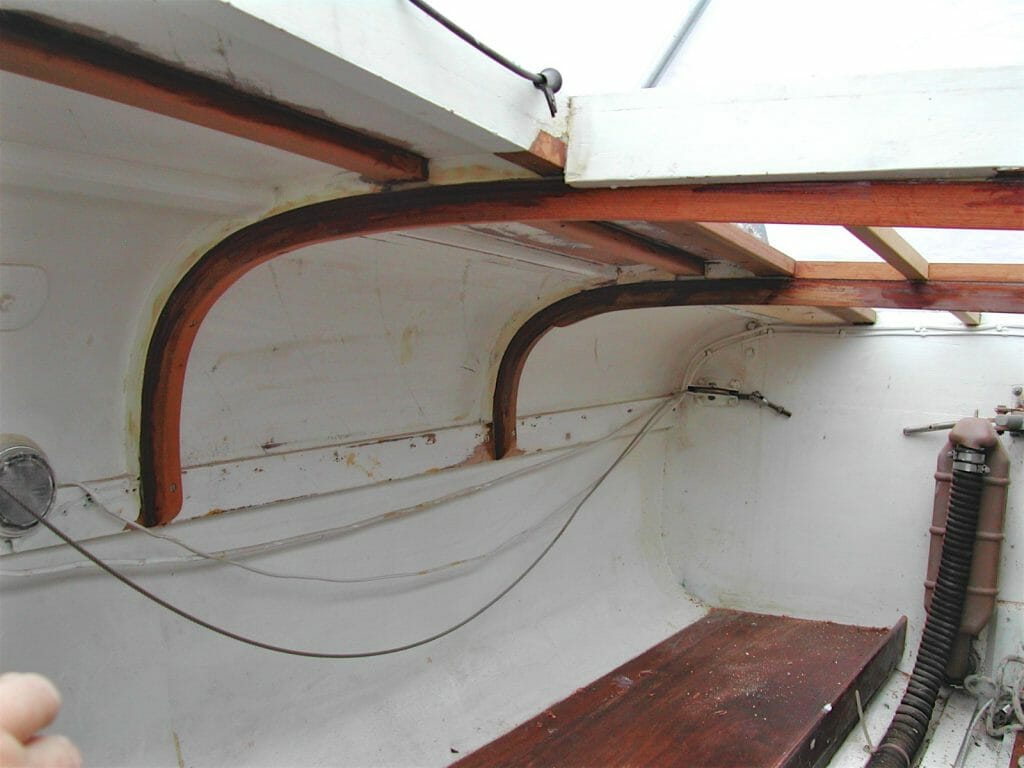 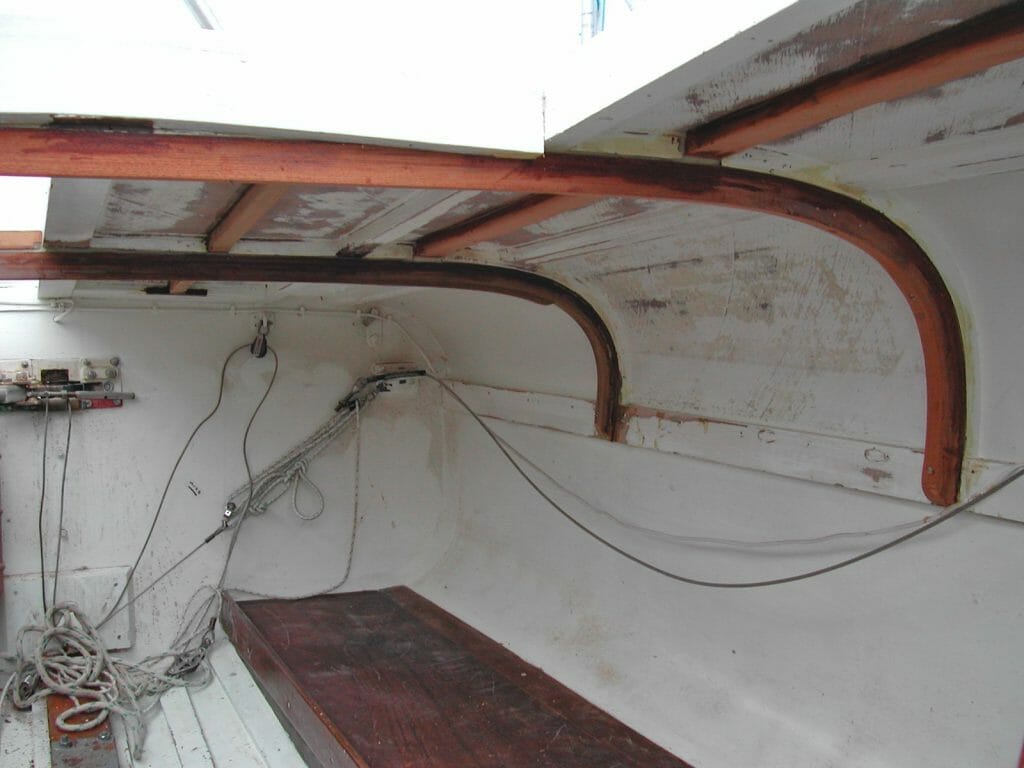 A124 … the appearance and utility of the cabin was greatly enhanced, enabling removal of the support post. The frames were now very stiff – time to sort the panelling over the top! 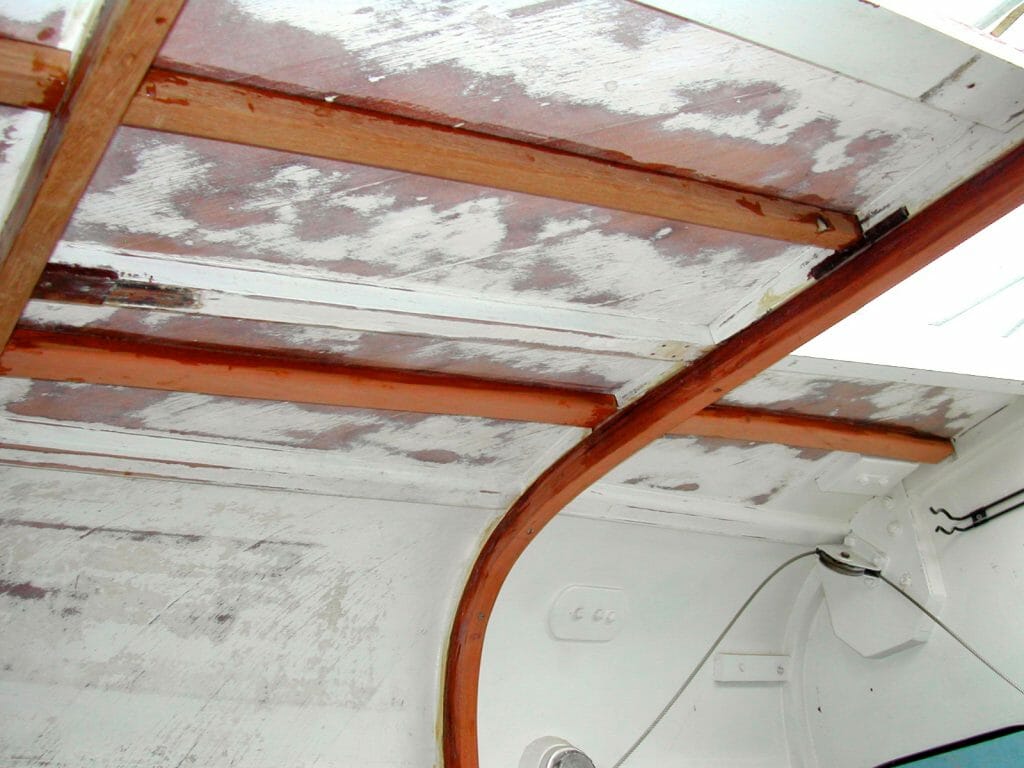 A124 Care was taken to ensure, within my limited woodworking skill and time, each deck beam sat ‘on top’ of the hoop frames. 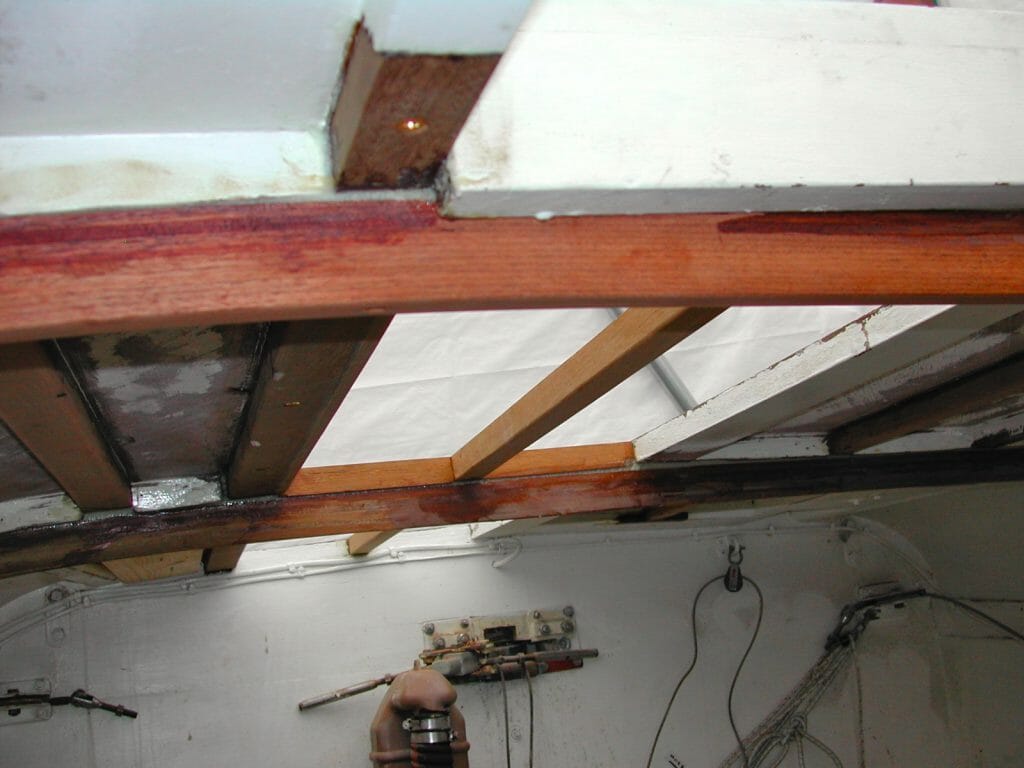 A124 A detail view of the forward hoop also showing my willingness to use (appropriately thickened) epoxy to make up the inevitable gaps between old and new wood. 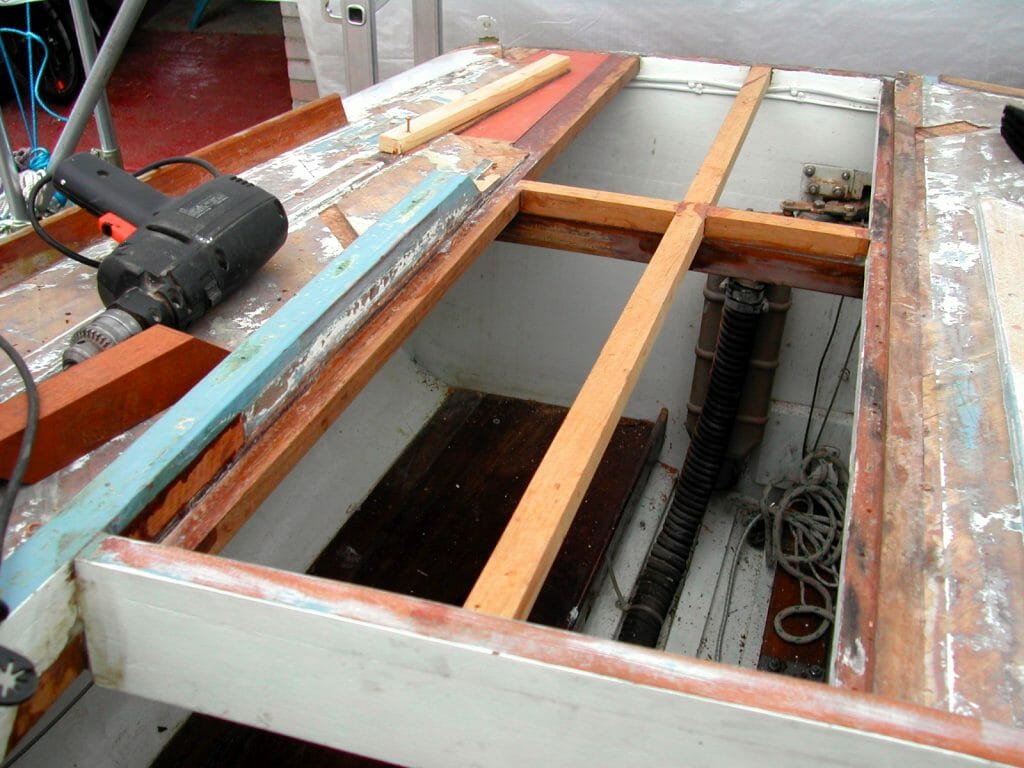 A124 The new framing was in iroko (rather than the original laminated form). Note the doubler required to form a landing for the new deck against the hatch rail to starboard. 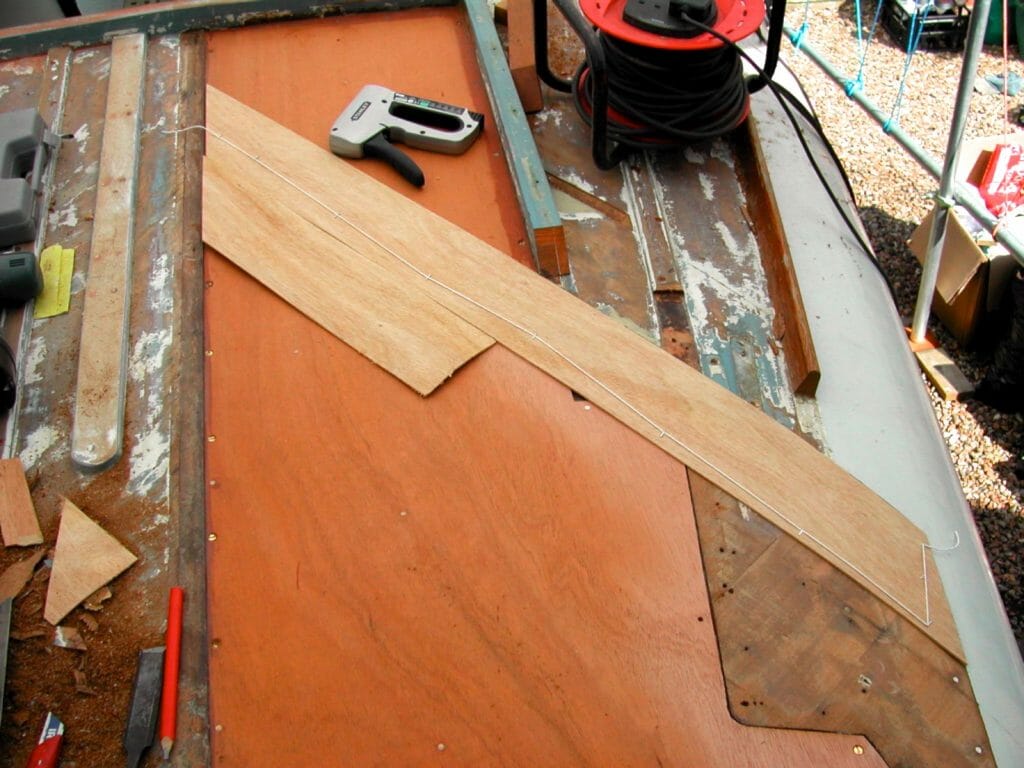 A124 … with a single lamination over the top. The ply was tied strongly to the existing deck by screws and epoxy on the framing. The top veneer of the old deck was then cut away well beyond the join and a 2.8mm veneer laid. 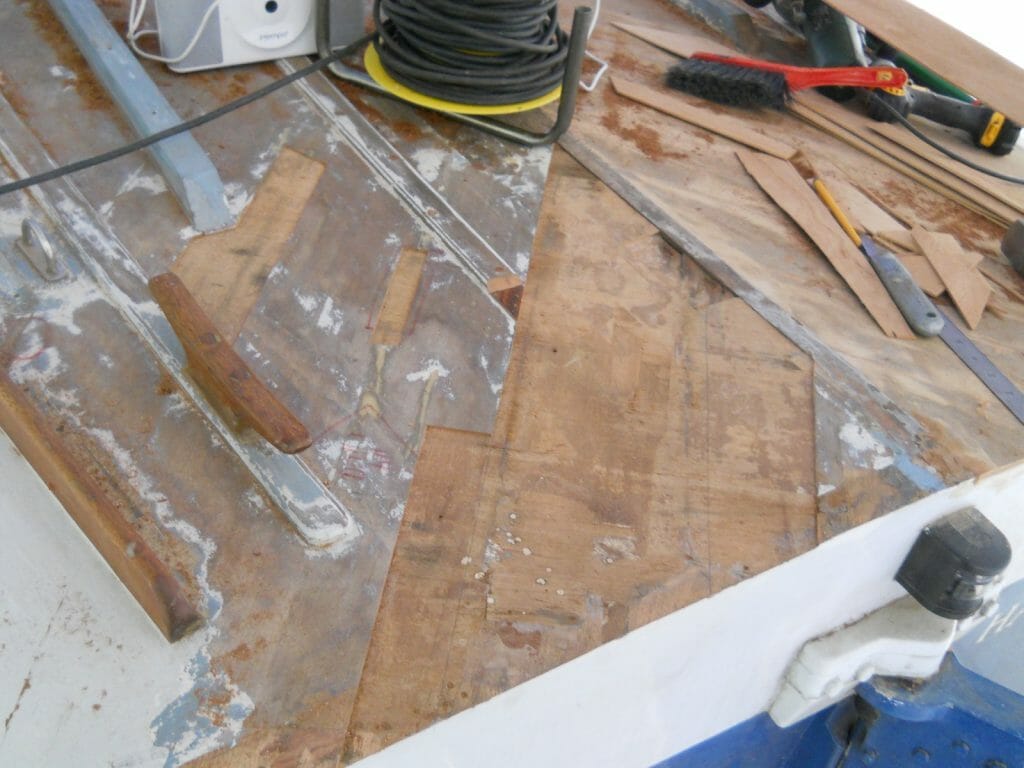 A124 On the port side the issue was mainly delimitation of the top layer. In two places the second layer was also rotten, and the join to the ‘king plank’ had come unglued. 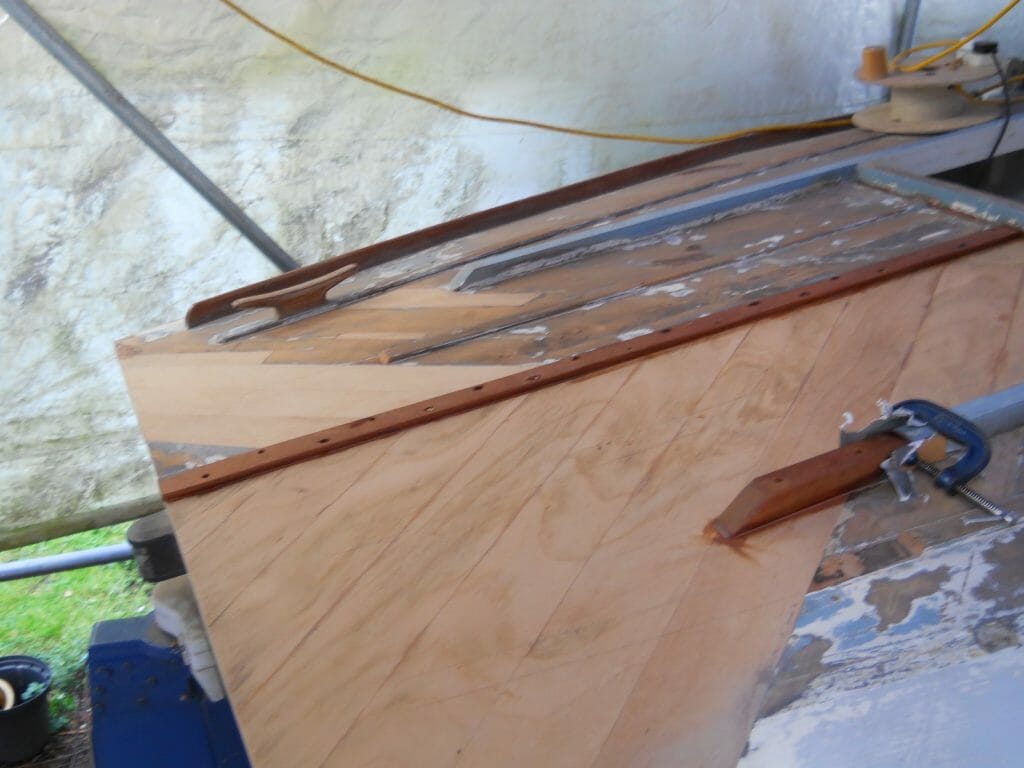 A124 Laminating finished, time to replace the missing hatch rail and deck stiffeners. 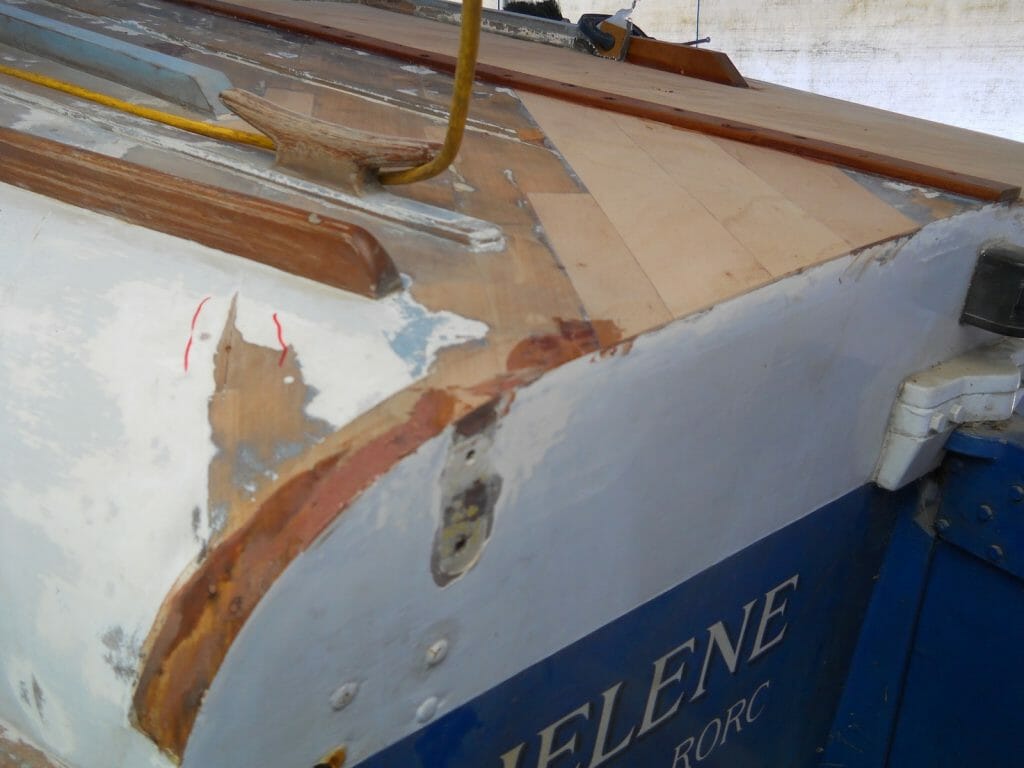 A124 The damaged port quarter being tidied up 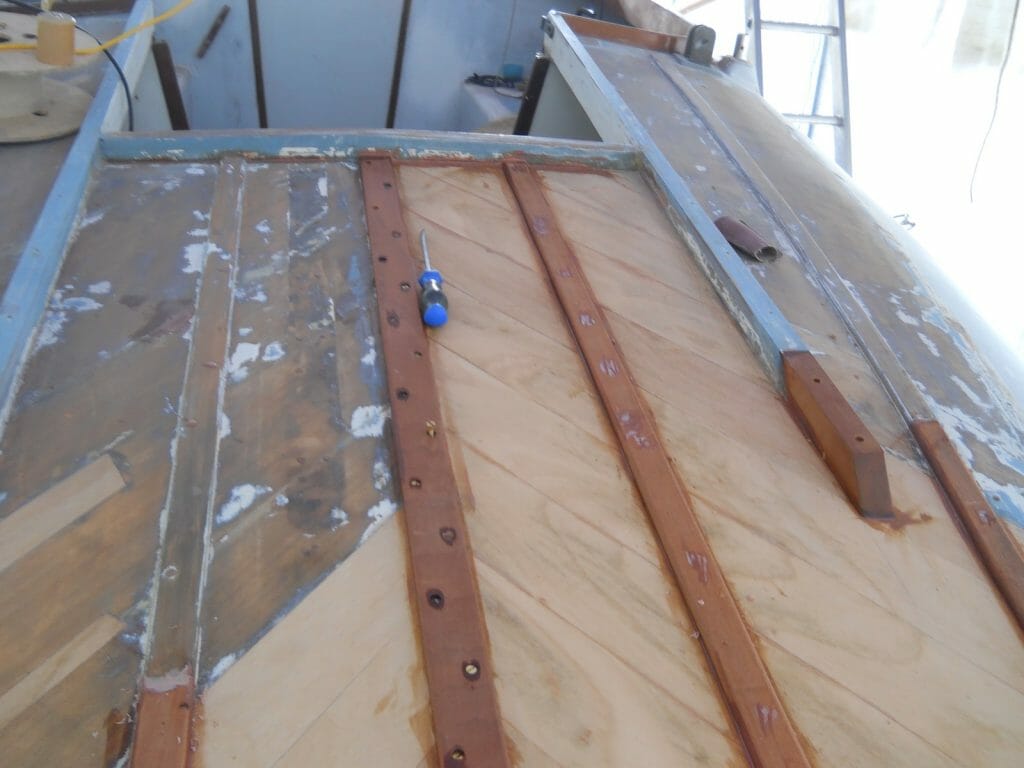 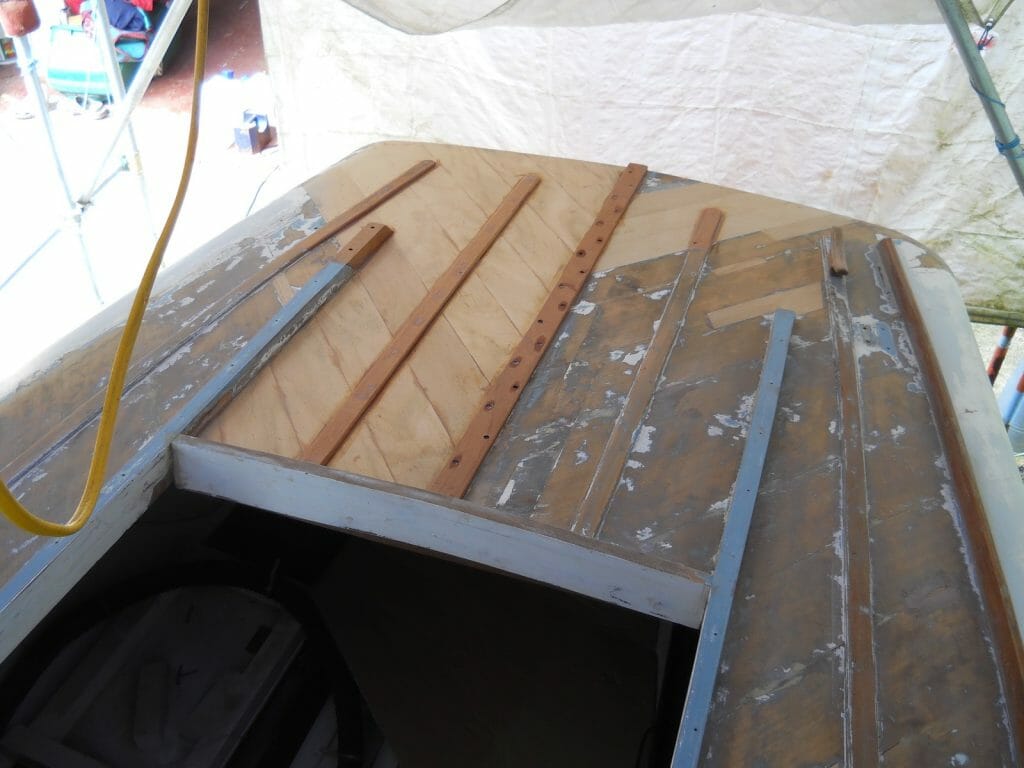 A124 Ready for finishing. After sanding the entire deck was treated to many coats of saturating epoxy (SP Eposes). This was applied until the wood was absorbing no more. 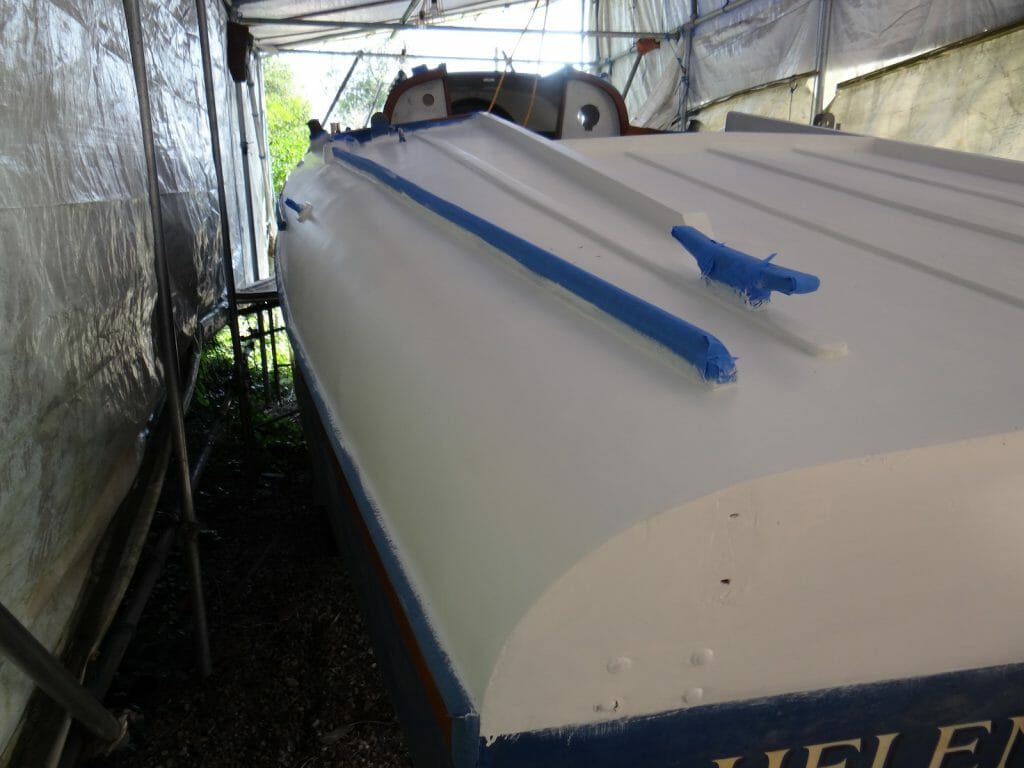 A124 The deck was then faired with EasyFair S resin by Reactive Resins. This is a marvellous product – it sticks tenaciously to most surfaces and especially to wood, and is a delight to sand. 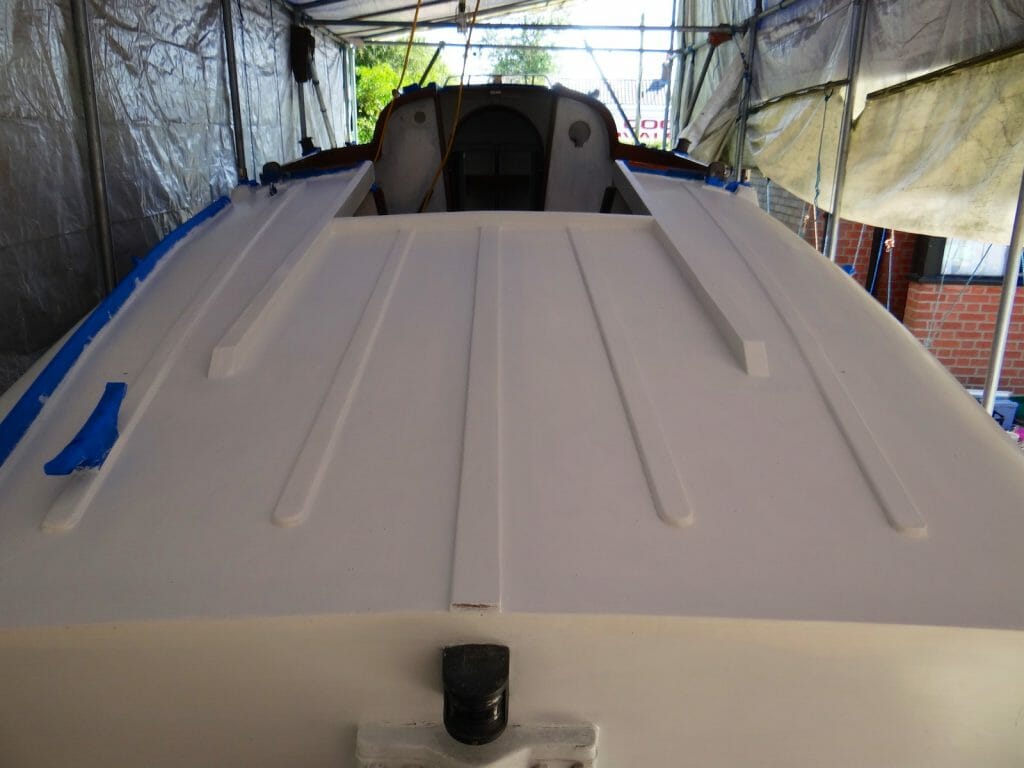 A124 I used the Easy Fair only to remove the worst indentations / staple holes. I did not want to end up with large areas covered with filler, despite the flexibility of cured Easy Fair. 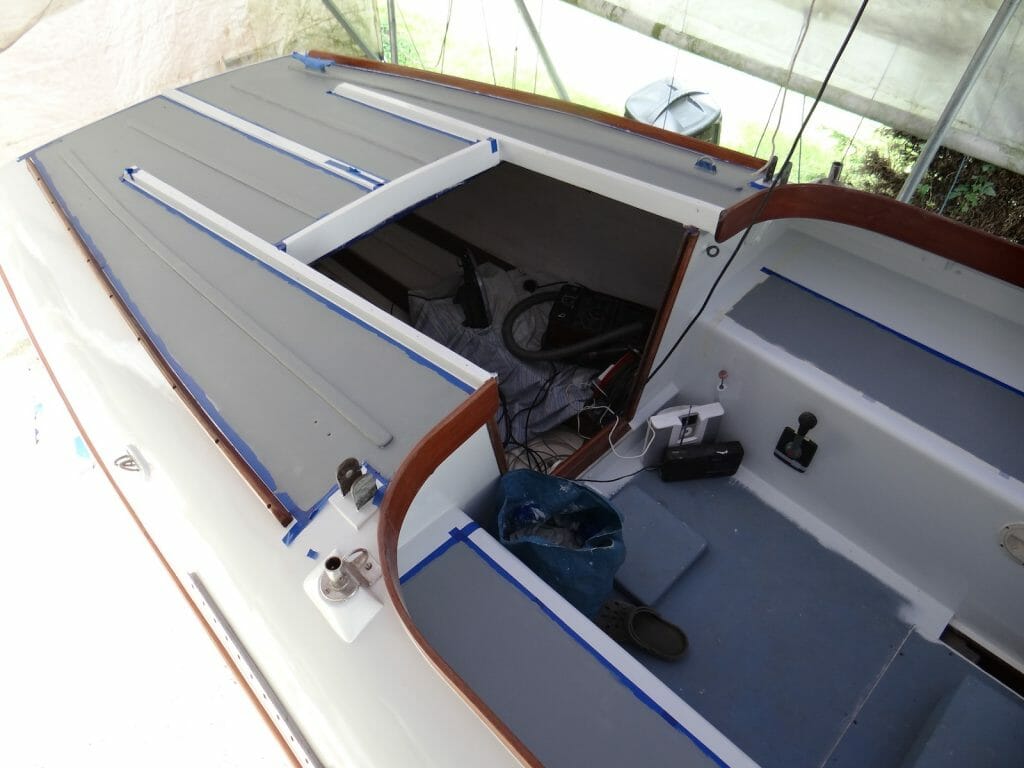