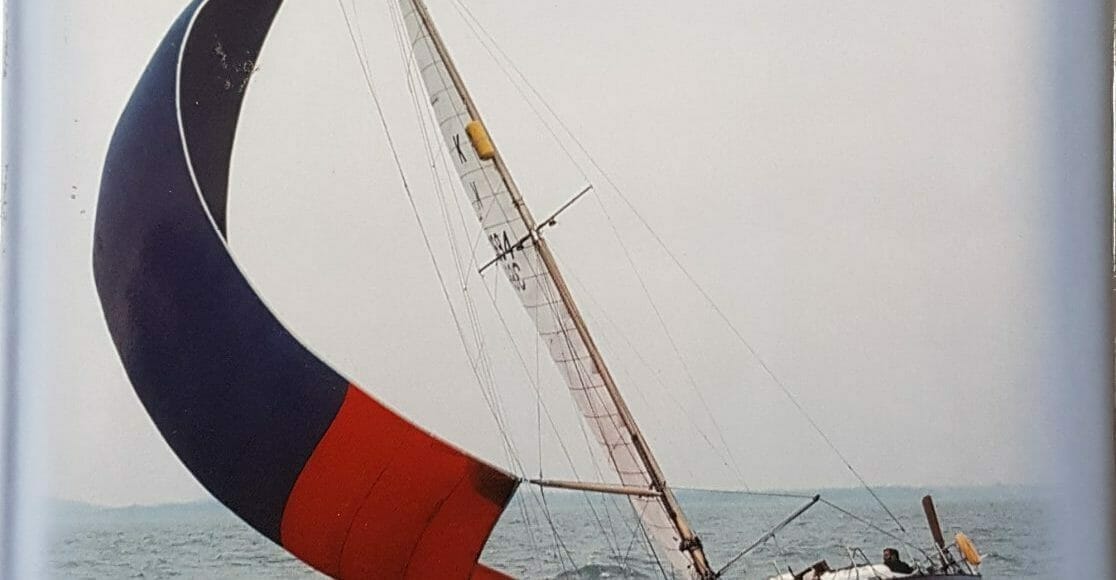 Immediately after sailing in the Round the Island Race on June 29 in which he came second in the Atalanta Class, Alan Perkes in A148, Sherpa, set out for the Round Britain Race which started from Plymouth on July 6. The event attracted a vast and varied fleet with multi-hulls as well as mono hulls well represented.

Alan’s brief account of the race is described in the 1974-5 AOA Bulletin and written up in more detail in his book ‘In the Wake of My Heroes‘. Sherpa met with many adventures, which began on July 16 when, in the Outer Hebrides in strong winds, the rudder sheered off just below the stock. This was followed by a very uncomfortable and anxious night in heavy seas. Never the less, Sherpa reached Barra Head on July 19, only 22 hours behind schedule. Island resourcefulness and hospitality provided, free of charge, a new rudder blade in mild steel and a magnificent tea! Off again at 1600 hrs on July 20 in continuing strong winds, the boat reached Lerwick on July 25 where an unfortunate incident with two MFV’s resulted in a broken mast. Here again, the local people were most helpful though not so the port authority or the trawler men. The mast was repaired and Sherpa left at 2043 hrs on July 26 for Lowestoft.

From then on down the East Coast, round the tip of Kent and down the Channel sailing was accomplished with the usual mixture of favourable and unfavourable winds and tides until Sherpa reached Plymouth and the finishing line at 0150 hrs on August 7. How she was placed vis a vis other competitors is not recorded but several boats had their misfortunes also and some did not finish. By completing this testing course, Sherpa, her skipper and crew had put up a very good show.

[CONSIDER EXTRACTS OF THE LOG from the book / Bulletins. And some photographs – again, some in the book, and maybe the family will provide more?]