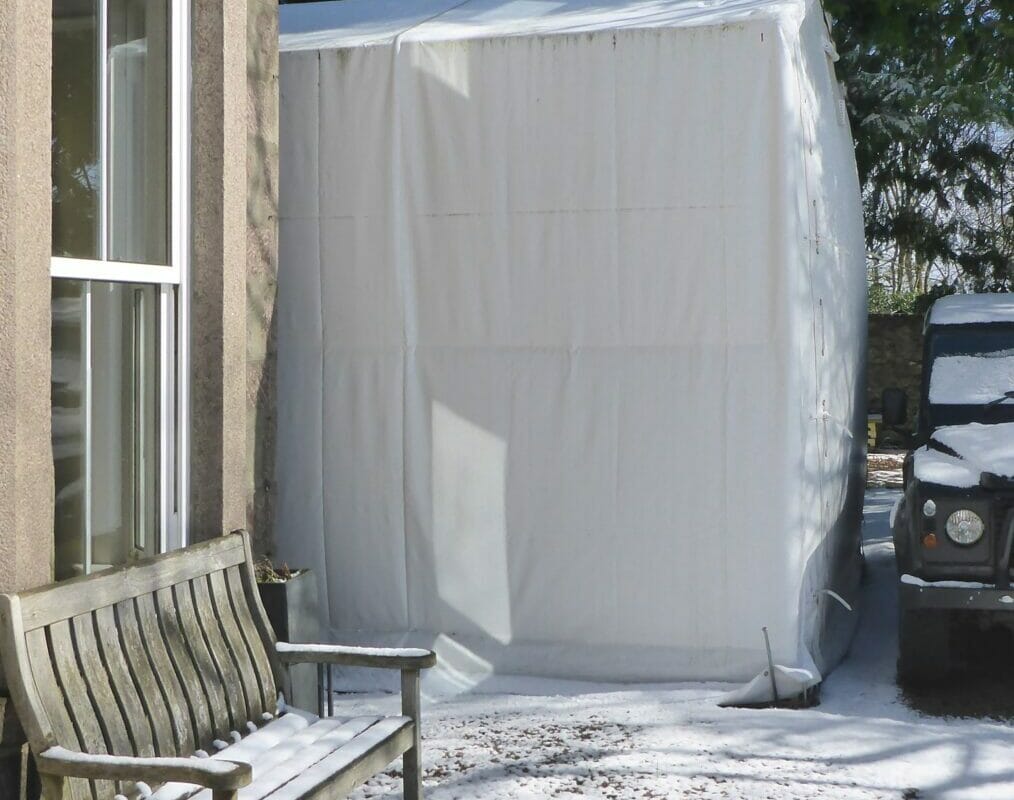 Work on Bluster has continued in April and early May. Much of April was spent removing rusty bolts from the engine bay area and rudder skeg. The keel stops were removed without difficulty, the bolt heads and nuts just fell off when hit with a spanner. Only one of the eight bolts securing them had any steel left and the remains of the bolts had to be chiselled out of their holes with an old screwdriver. There was no sign of the wooden stops that should have been suspended below the steel stops to keep the keels protruding from the bottom for grounding on a flat bottom. The steel stops will be replaced.

The various bolts supporting the wooden engine bearers through square corner pieces were removed next. These were in better condition as they were probably not original but a later addition. However, some sheared off and all needed replacing, as did the square corner pieces as they were either split or brittle and broken due to the effect of the rust on the wood. Although not replaced yet, new corner pieces have been made from Sapelle and new A2 stainless bolts procured.

The steel engine bearers that bolt onto the wooden bearers have now been galvanized and painted, and their backing plates remade. These are waiting to be galvanized.

While working in this compartment the  ‘gutters’ around the engine access hatch were removed because, although they were not rotten, the brass screws in the supports were rotted so they were loose and leaking.

The two one inch thick boards either side of the lower part of the aft cabin bulkhead, supporting the whipstaff bearing, both had areas of rot, so were removed. The plywood bulkhead had two patches of rot, but this will be cut out and repaired before putting back replacement boards and capping piece.

Moving aft to the transom and rudder skeg, this had been removed at some stage and re-bolted on with steel bolts and coach screws, but was a bit loose, and much of the old steelwork was still in place, rusting and damaging the wood further. The skeg was removed and partially repaired where it had been split by rusting fastenings, but I am considering replacing it completely with new pieces of sapelle.

The  lower part of the transom is made out of two sheets of plywood, whereas the upper part is solid board. Where the upper rudder pintle is mounted it had been backed by two aluminium plates which were very corroded and had dissolved the wood behind them to a depth of one centimetre. The same had happened on the skeg under the lower rudder pintle. The transom was repaired by scarfing in a piece of sapelle. The same was done to the inside of the transom, but lower down where the rudder uphaul / downhaul wire double cheek block had been fitted. The area was riddled with the remains of corroded brass screws and the plywood was badly damaged. I was going to replace the cheek block, made of bronze, as it was jammed and bent where it had come adrift at its lower fastening at some stage. However, as I could not find a suitable replacement, I straightened it out, and by replacing the very worn spindle with a stainless steel bolt, moved the sheaves off the edge of the housing where they were jamming. Although it now has one crack, I think it will be strong enough if securely fastened to the transom. I would like to bolt it on, but the bolt heads would be under the rudder skeg when replaced, so I would be unable to remove them at a later date, if required. It will have to be long screws.

The steelwork on the inside of the transom where the rudder comes in has now all been re-galvanized, thanks to Greg Manning who invited me to put these, and other pieces, in with a batch he was having done.

The hull laminates around the area of the rudder skeg were loose or damaged, either from my removal of the skeg, or the previous removal. The false keel was removed and the damaged laminates were peeled back and replaced. The keel had been damaged by badly rusted coachscrews and earlier steel screws, turning much of it black and brittle. The worst part was chiselled out and a block made to be glued in once the old coachscrew holes have been prepared for plugging. I would have liked to have removed all the blackened wood, but feared that there would not be much keel or keelson left!

I am assuming that the shaft deadwood is also fastened on with rusting steel screws as it is loose and coming apart. It will also have to be removed and reconditioned once the stern is supported elsewhere.

While inspecting the transom it was noticed that the skin was also loose on the port quarter, under the rubbing strake. Water had evidently got into the hull to deck joint under the rubbing strake. It had been repaired previously, but not down to the innermost lamination (of four). This area was cut back to good wood that was still glued to the transom and will be re-laminated. The brass screws holding the skin to the transom were all corroded in the head area, but the shafts were solid and could be removed once the skin laminations had been peeled back. The holes have been plugged with 6 mm Sapelle dowel and the new skin will be refastened with stainless or bronze screws.

Where the hull laminates have not been removed, there are many brass screws with corroded heads. I would like to remove these if possible, and refasten, but fear that drilling them out will only result in damage to the wood around them. Is there a trick for this job?