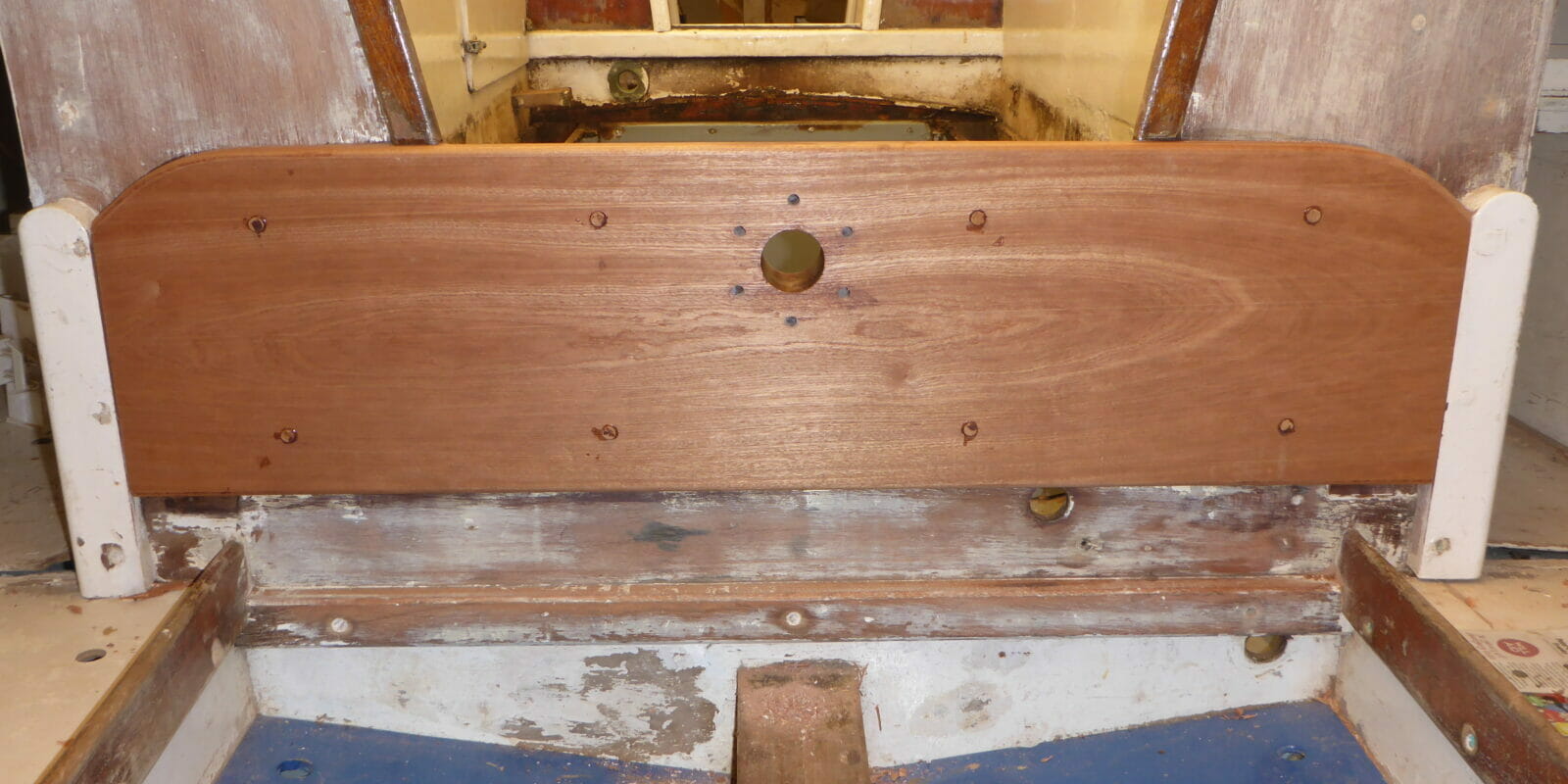 Bluster has guard rail stanchions at the aft end of the cockpit. These were bolted through the stringer and the deck with a block beneath and above. Unfortunately, after being pushed around a bit, the water had got in and rotted the deck, so the plan was to insert a more substantial block to take the loads.

The curved and laminated piece under the edge of the deck passed very close to the horse support, and was partially cut away to make room for it. This did not allow much room to fit a block that would take potentially substantial outward loads, so the curved laminate was cut away and the curved corner moved further forward. The laminated edge was then replaced for additional strength.

The block was continued underneath the stringer at the edge of the cockpit to provide additional rigidity. On the starboard side the curved laminate was rotten, so it was completely replaced.

The deck laminates will now be replaced and blocks made to fit above and below to provide a horizontal base for the stanchion and its bolts.

While working in the cockpit I also tackled the aft bulkhead which was partially rotten, as were the boards either side of it which provide a mounting for the whipstaff bearing. Water had got in to the bulkhead by getting underneath the capping strip. Although the sections were partially glued together, there was much space between the patches of glue for rain water to find its way into.

The solid wood boards forward and aft of the plywood bulkhead were removed and discarded, and the rotten section sawn out of the central bulkhead. This, incidentally, was formed by two pieces of ply, joining on the centreline.

A piece of solid Sapelle was cut to replace the plywood section of the bulkhead, and other pieces cut to provide the boards either side of the bulkhead.

The holes for the whipstaff bearing were cut using a drill stand before fitting the wood into the boat. The pieces were then glued in place with epoxy, and clamped and screwed to try and avoid air gaps. Particular attention was paid to the upper joints where water might try to enter. The capping piece was made of one piece of timber rather than a central piece and two edge pieces as in the original.

The original backing board in the aft cabin was varnished. The new board is a nice piece of wood and I will varnish this too. The rest of the bulkhead will be painted, as before.

The slow process of removing layers of rotten or soft hull and deck laminates from around the rubbing streak on the starboard side, is now finished, with the last pieces going on today. In several places all the layers of laminates had to be replaced.

Water that had entered at the hull-deck join had sometimes also damaged the stringer behind it, and caused the mouldings to become detached. The only real damage to the stringer was where the chain plate bolts had rusted, and small sections had to be cut out and replaced. Where the mouldings had become unglued from the stringer they were just re-glued by squeezing in some epoxy. The original brass screws were all de-zinced to some extent; most broke off part way along their length or at the head. They will be backed up by a new set of stainless steel screws before replacing the rubbing strake.

3 thoughts on “Cockpit Corner Reinforcement and Repairs to Aft Bulkhead”