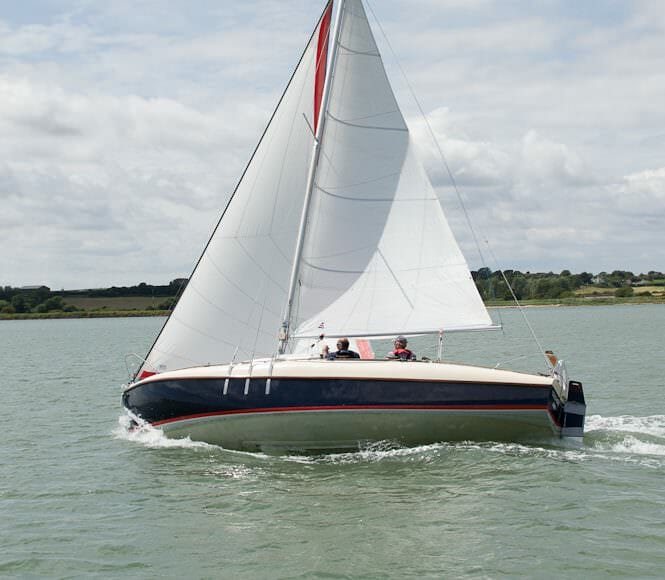 Bernard Upton bought an Atalanta kit, hull number 104, directly from Fairey Aviation, Hamble on 25 November 1958 for £2800 and had it delivered to Cambs. The hull was built in a canvas shed in the grounds of a printing works in Wisbech. Bernard Upton and Wally Green, a former shipwright, worked on the hull in the evenings and at weekends. They used the new CIBA Aerodux glue for most of the hull work, which was very successful. Colchide is unique in having extra stringers in her hull. Bernard contacted CIBA for advice on coverings for the boat and they recommended brand-new technology woven “Marglass” fibreglass all over the wooden hull. CIBA sent an expert to see the results and were delighted with what they saw and started to market Marglass.

Bernard’s wife Marie-Louise got a job in London and they moved into a flat on the King’s Road, Chelsea and kept the boat in the basement there for 2 years! Colchide still required finishing, mostly painting, fittings and an engine. Marie-Louise then got a job in Rome with the UN, so they emigrated to Italy without Colchide. Bernard sent Colchide back to Fairey in Hamble for completion. Fairey painted her inside and out, then fitted a “Fairey Ford” engine, which was an early 4-cylinder, 24 bhp petrol engine. Bernard kept in contact with Faireys by letter and ordered a Sparlight alloy mast and boom, of the same dimensions as the original wooden items and fitted a early Rotorstay furler of 1976 vintage. He then ordered sails from Mrs Williams sail loft in Hamble in 1963. These were fitted, then two Atalanta Owners Association (AOA) members carried out successful sea trials of Colchide along the Cornish coast in late 1963.

Bernard joined the AOA shortly after it formed in May 1958, so he wrote to the AOA to see if anyone would deliver Colchide to Rome for him. The AOA found a sailor who was delivering boats to the Cote D’Azur, so he was engaged to take Colchide there. In 1964, Colchide arrived in Antibes and was left on a mooring by the delivery skipper. Bernard & Marie-Louise flew from Rome to Nice then took a taxi to Antibes and started searching for her. They eventually found her tied by one strand of thin rope to an offshore buoy.  Bernard & Marie-Lou sailed her towards Rome via St Remo. However, a storm blew up and Colchide was left in St Remo port for 2 weeks until Bernard went back to retrieve her. In 1964 the River Tiber, which joined the Mediterranean to Rome, was un-navigable due to a sand-bar, so Colchide was kept at Civitavecchia & Anzio. Bernard and Marie-Lou stayed in the Rome area for over 10 years and sailed Colchide most weekends around the Mediterranean.

img src=”/Users/User/AppData/Local/Temp/msohtmlclip1/01/clip_image002.jpg”In 1974 Bernard & Marie-Louise moved to Switzerland, so Colchide was left on some waste ground near Rome, with 2 old tarpaulins to protect her. That winter, there was a huge storm and the boat moved 6 metres across the waste ground. In 1975, Bernard asked the AOA to find him a trailer suitable for an Atalanta. A trailer was found but needed overhauling, so Bernard had the trailer sent to Zetwins of Southampton who converted the trailer in May 1977. Bernard borrowed a Land Rover and drove the trailer from Southampton to Rome. He then found a crane and successfully loaded her onto the trailer and drove her to Switzerland.

The old Fairey Ford engine was getting tired so he looked around for a replacement. At the same time, a German engine and gearbox manufacturer, Farymann were marketing a brand new hydraulic marine propulsion system. Bernard liked the look of this system and ordered a Farymann A30 single cylinder diesel engine and a Hydromarin Farymann Flygmotor drive system. A Swiss engineer from Lausanne fitted the engine and hydraulic pump and reservoir backwards to give better access to the ancillaries. Hydraulic pipes then took the drive to a gearbox under the whipstaff which was connected directly to the prop shaft. The Swiss engineer then contacted a Swiss propeller manufacturer who made a folding 2-bladed propeller. However, when the prop was offered up to the hull, it was felt that it was too close to the hull so an inch was cut off each blade.

In 1978 Bernard found a marina mooring on the west coast of Lake Geneva and Colchide was launched into fresh water for the first time. For the next 35 years, Colchide spent the summer months in Lake Geneva and the winter months in a boat-shed in Gland, just north of Geneva. Bernard sailed her almost every day if there was good wind and eventually found an excellent mooring at Founex. As she was being used on the lake, Bernard removed over 100 kgs of un-necessary fittings. Colchide still had a very basic electrical system, using one old car battery, she had no radio, no compass and no toilet.

The original rudder was very heavy and Bernard wanted a lighter rudder, which would be easier to use in the marina. Bernard designed and made a thin wooden rudder, which fitted vertically into a stainless steel cassette which saved 10 kg in weight and was easy to use.

By 1995 the original Williams sails were showing their age, and Charles Currey had recommended fully battened sails at the previous AOA AGM. Bernard ordered a new fully battened mainsail from Voiles Gautier of Switzerland and a new huge 21 square metre genoa from Southern Sails of Wimborne, Dorset. The total sail area was now over 36.5 square metres, but Bernard needed the extra area for the light winds on the lake.

Colchide still has the original TUFNOL fittings purchased from BX plastics in Croydon in 1958.

Bernard was a regular attendee at the AOA reunions and welcomed a number of members and family members to sail Colchide, including AOA Secretary John Ingleby who sailed her in 2011 and Bernard’s nephew Richard James who sailed her several times. Bernard continued to sail her single-handed into his 90s, but in 2012, he nearly fell off into the lake and decided it was time to let her go.

img src=”/Users/User/AppData/Local/Temp/msohtmlclip1/01/clip_image004.jpg” In 2013, Bernard, aged 94, asked Richard James to collect her from Switzerland and take her home to England. Richard engaged Fenland Boat Transport to bring her home in August 2013. Meanwhile Richard travelled with his good friend Donald Lambert and his son Alexander to Switzerland in a large van to collect all the old spares. Colchide was taken to a disused tennis court near Kings Lynn, which was only 25 miles from where she had been built 55 years previously. She was fully re-painted and kitted out with 2 new batteries, new liferaft, VHF radio, warps, safety flares, fenders and new lighting. The engine and gearbox were also serviced. By now, Richard was a regular attendee at the AOA reunions and following a chat with AOA member Martin Bennett, Richard discounted Wells-Next-The-Sea, Brancaster and Lowestoft, but chose to keep Colchide at Suffolk Yacht Harbour (SYH), Levington, near Ipswich.

Colchide arrived at SYH in April 2014 and was left with a local marine electrician for final electrical work. A few weeks later her mast was stepped and she was lifted her into the water. The old Farymann engine started first time and she was motored to her new berth. She was sailed until December 2014, when following advice from Bernard, she would spend every winter on the hard. Over the winter of 2014/2015 new cabin windows were made by Martin Bennet and fitted by Richard. The plastic raw water filter was found to be cracked and Bernard admitted it was a filter from a 1960s domestic Italian washing machine. It was replaced by a new Stuart Turner brass fitting.

Over the winter of 2015/2016, the 36 year old exhaust system was due for updating, not least as it did not have an anti-syphon valve or a water lock, which was essential in the North Sea. New Vetus exhaust pipe, Vetus anti-syphon valve and Vetus waterlock were sourced from the internet at trade price and successfully fitted. The sails too were baggy and showing their age, so Richard contacted his local sail loft, Jeckells of Norwich and asked for a quote for a new genoa, as the 21 square metre genoa was far too big for the North Sea. By co-incidence, AOA Commodore, Colin Twyford was also looking for a new genoa following the theft of his old one. A deal was struck with Jeckells for 2 identical genoas and Richard’s was fitted in April 2016. Colchide was now much better balanced and easier to handle in a blow. The dreaded keels had seized just before the East Coast race in August 2015, so the next job was to drop them, service them and replace them, and this is covered in a separate AOA article. Colchide was put back onto the water on 30 March 2016. The genoa winches were showing their age too, so 2 modern winches were procured from AOA Secretary Nick Phillips.

Sadly, Bernard passed away on 22 April 2016, but he was delighted to hear that Colchide was still giving excellent service and he was always very interested to see photographs of the latest modifications.

Colchide continued to sail throughout the 2017 season took part in the West Mersea Regatta for the first time. She was taken out of the water on 11 Dec 2017, with very little fouling on her hull. As usual there is a list of jobs to be done over the winter, but the priority is sorting out a decent propeller to replace the “eggwhisk”.