More about Ahamkara, a most unusual Atalanta

A most unusual Atalanta

Mariana and I visited Maree Ellis aboard “Ahamkara” which her father Jack Ellis built from Atalanta 26 plans between 1961 and 1966. For the last 15 years “Ahamkara” has been moored in Benfleet Creek, not far from Benfleet station, and recently Maree has lived aboard during the summer months when she stays in UK to visit her father. The boat is now for sale – click here for sales brochure 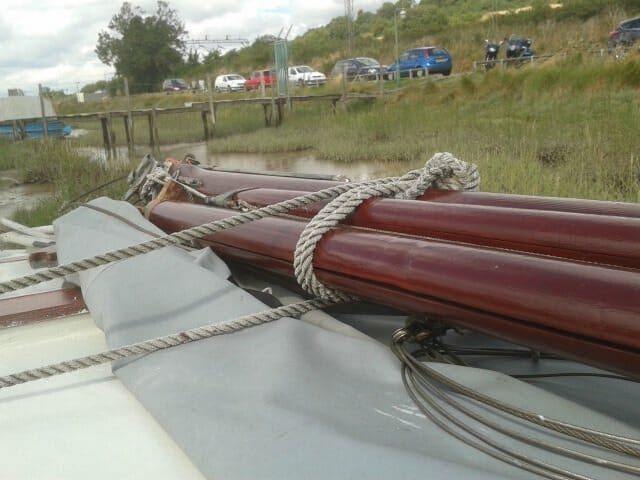 “Ahamkara” is fully equipped with Atalanta mast and boom, full inventory of terylene sails in good condition, warps and fenders etc., 30lb CQR and 15lb Fisherman anchors, working Simpson Lawrence sea toilet, and a 10hp Mariner long shaft outboard mounted above a well inside the aft cabin. Her voyages have included a trip across the Channel and through the French canals as far as Avignon.

What is remarkable about “Ahamkara” is that she was entirely built from the Fairey plans by one person using traditional boat building methods and without the help of the factory techniques and components used for the hot-moulded Atalantas. Jack kept a detailed log of construction with photographs, which I hope to put together for an illustrated Bulletin article.

The first step of construction consisted of building “stations” or bulkheads shaped to the Atalanta cross-sections, these were then mounted upside down in the correct positions and lined up using an ingenious system of water-filled transparent tubes. The stations were then connected together with the hog, as it was built up from 6 in. wide strips of mahogany laminated with Aerodux 500 Recorcinal resin. In order to keep the resin at the correct temparature while the weather fell below freezing, an electric heater element was unwound and laid in asbestos tape along the length of the hog to maintain it at 40 deg. F. 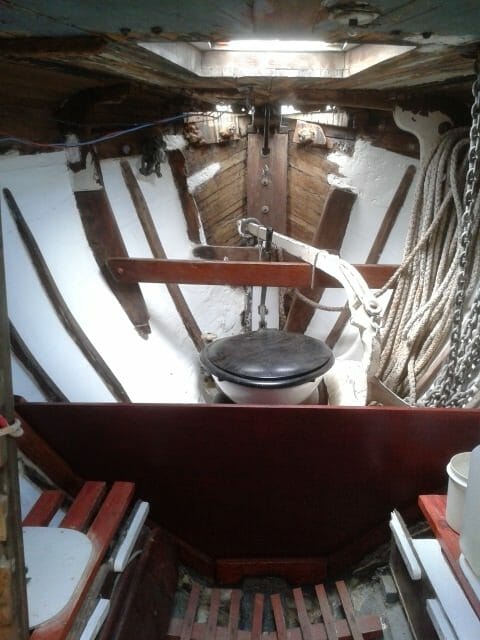 The hull was then constructed from narrow lengthwise planks of mahogany, edge glued with Resorcinal resin and screwed in place with gunmetal screws. Two keel boxes were built in keeping with the Atalanta design, although the metal keel mounting structures have no keel bolt tubes. The entire hull was covered in cascover sheathing: heavy gauge nylon cloth soaked in Recorcinal resin glue. With keel and skeg added the hull was then turned right way up, and the deck built using 1 x 3/4 in. Burma teak planks and bronze wood screws. Even today the hull is totally dry, after nearly 50 years only rainwater has occasionally entered through joins in the cabin roof sections, although some of the spruce wood components have deteriorated.

Two keels each weighing 440lbs were constructed from marine ply sandwiched between iron plates and bolted together, and the whole coated with heavy duty nylon and several coats of resin. Thick rubber spacers limit sideways movement of the keels, which are raised and lowered by a system of pulleys instead of the usual Atalanta winding gear.

The cabin roofs are a simple inverted vee-shape, giving plenty of headroom. Cabin layout is similar to the Titania, with the heads and two 6 ft. cabins forward, a coverable centre cockpit with steering wheel and engine controls, and an aft cabin containing the well for the outboard engine. When sailing the engine is lifted out of the water. 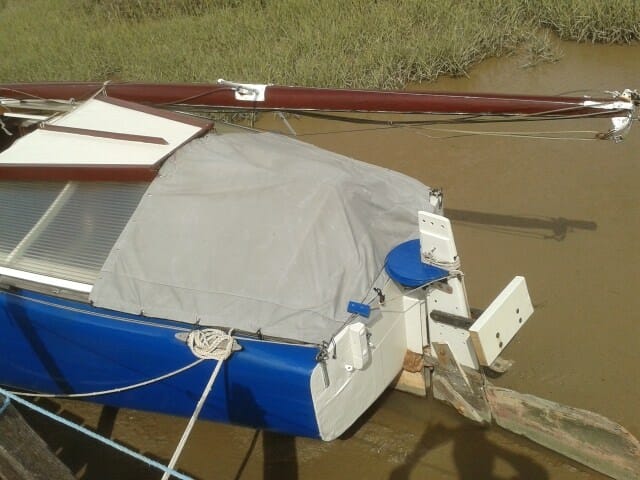 As mentioned above, “Ahamkara” is now for sale on a mud berth in Benfleet Creek, where she has provided simple but warm and comfortable living accommodation for several years. Maree has clearly worked hard to keep everything well painted and weather-tight, although like any wooden boat, there is always more to be done. In 1965, when Jack lived aboard for the final stages of construction he noted that the cabin was “too warm for a pullover” even though it was 7 degrees below freezing outside, and his total winter heating bill came to 10 shillings (50p in modern money).

Towards the end of his construction log, Jack wrote: “You asked for a photograph of (me?). I’ll send you a photo of the clothes and skin that cover my body later, but if you want a photo of me look at this boat”.