Mourne Goblin was bought in 2001 from Gavin Clarke who lived at Bettyhill on the North coast of Scotland so before I could collect her a trailer was needed. I obtained the plans from the Association and then began to look for a suitable donor trailer to convert. Luck was with me and at the first farm sale that I went to I obtained one. My best buddy then welded up the frame whilst I made the chocks (Henry has become invaluable in the upkeep of Mourne Goblin as although a joiner by trade he can turn his hand to most practical jobs and has a fully equiped workshop with woodworking machines and a lithe). 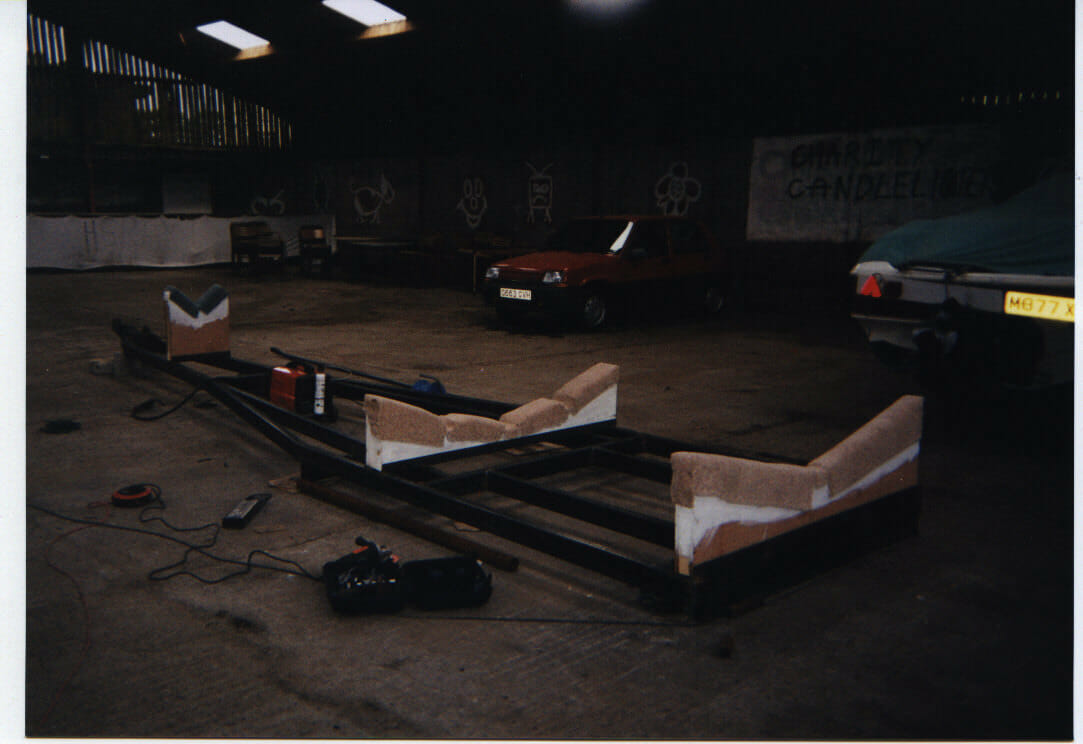 Once the trailer was completed it was up to Scotland (via Derbyshire to collect a Land Rover to tow everything with). We arrived late on Friday and retired to the pub to discuss tactics. Gavin had bought her about five years earlier and had spend many hours stripping her back and making good some rotten areas, in order to do this and keep the rain off he had built a shed around her. Our discussions concluded that the best way to lift her was using a chain block and some strops hanging from a couple of wooden Frames. 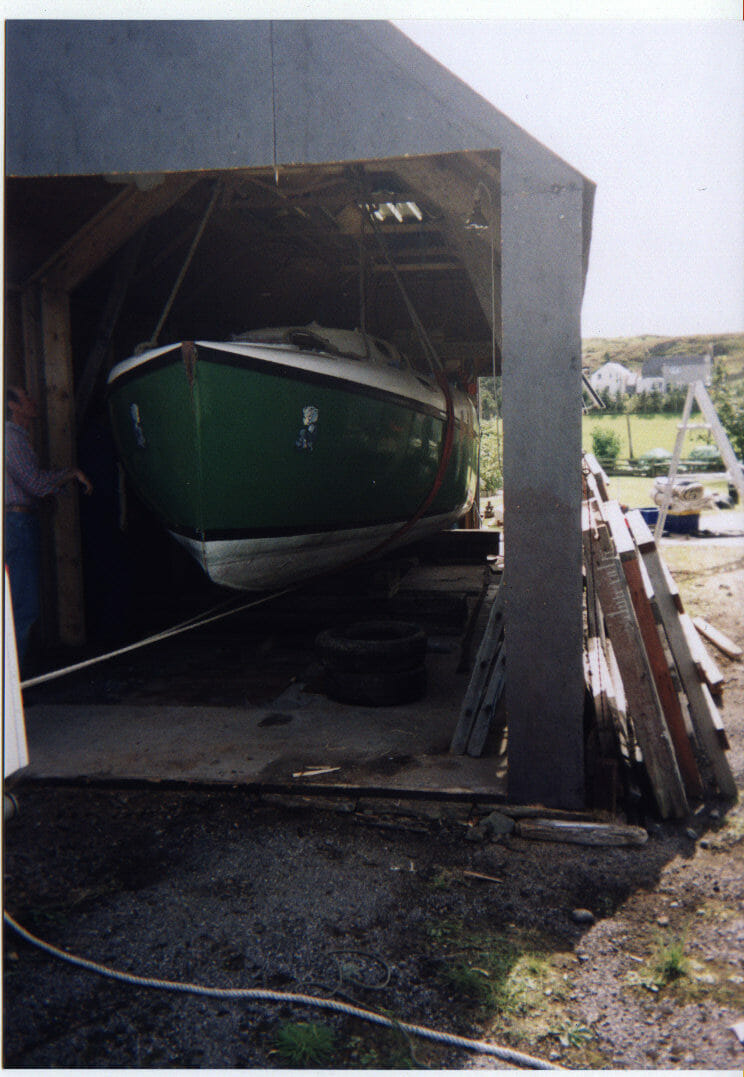 Next day bright and early we began the big lift slowly the boat began to rise first the bow was raised a couple of feet chocked and the chain block moved to the stern to raise that it took about 9 hrs to raise her high enough to push the trailer under her and secure her for the road. 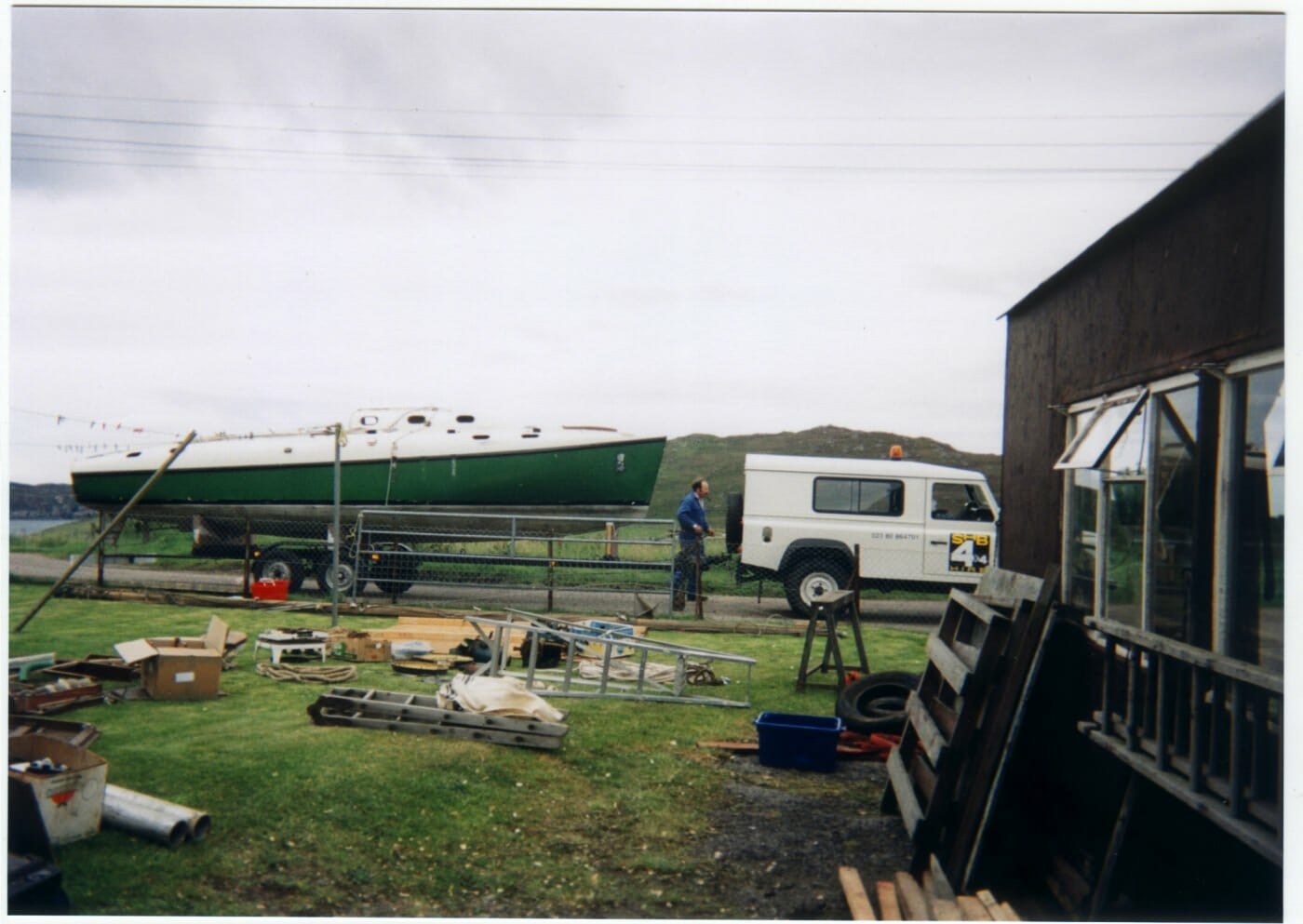 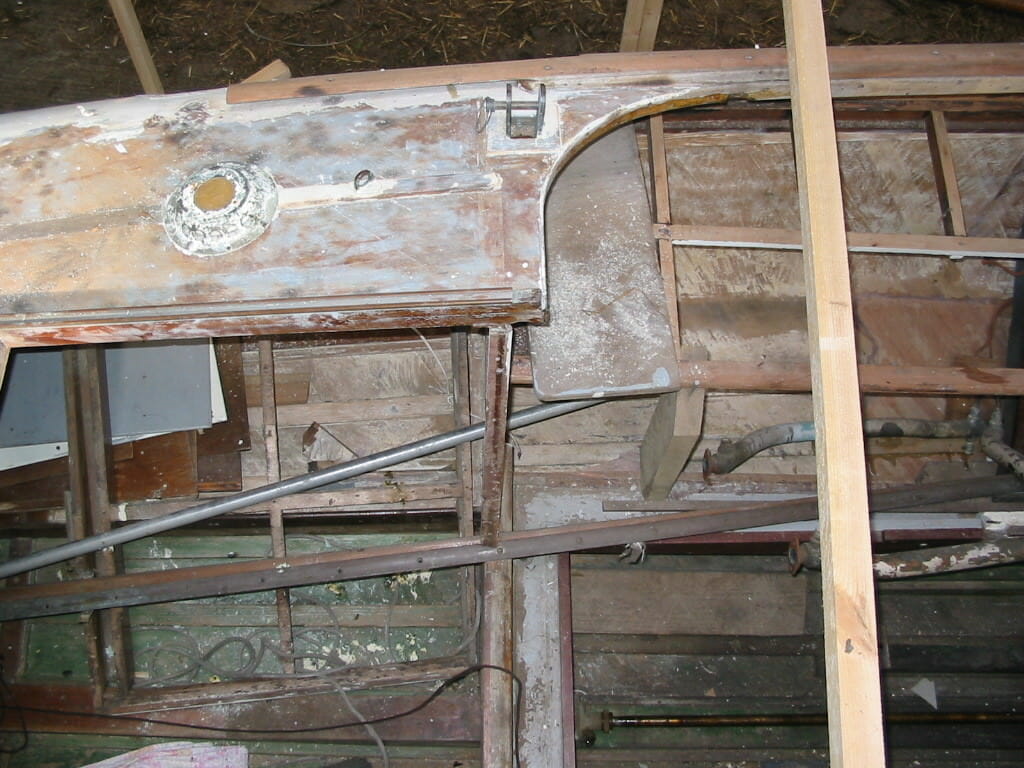 The cockpit was non-existent, the engine was in a bucket as were all the fittings very much a giant jigsaw with no picture to follow. I was fortunate to have the use of a large barn in which to work. I needed to decide on the best plan of attack do I just stick the fittings back on to the hull as she stood or do I strip her down further to make sure that there was no rot hiding under the paint and Cascover I chose the latter.This meant that I had many hours of sanding in front of me, the use of the barn was a godsend as it meant that I could make as much mess as I wanted each day without the need to constantly sweep up. 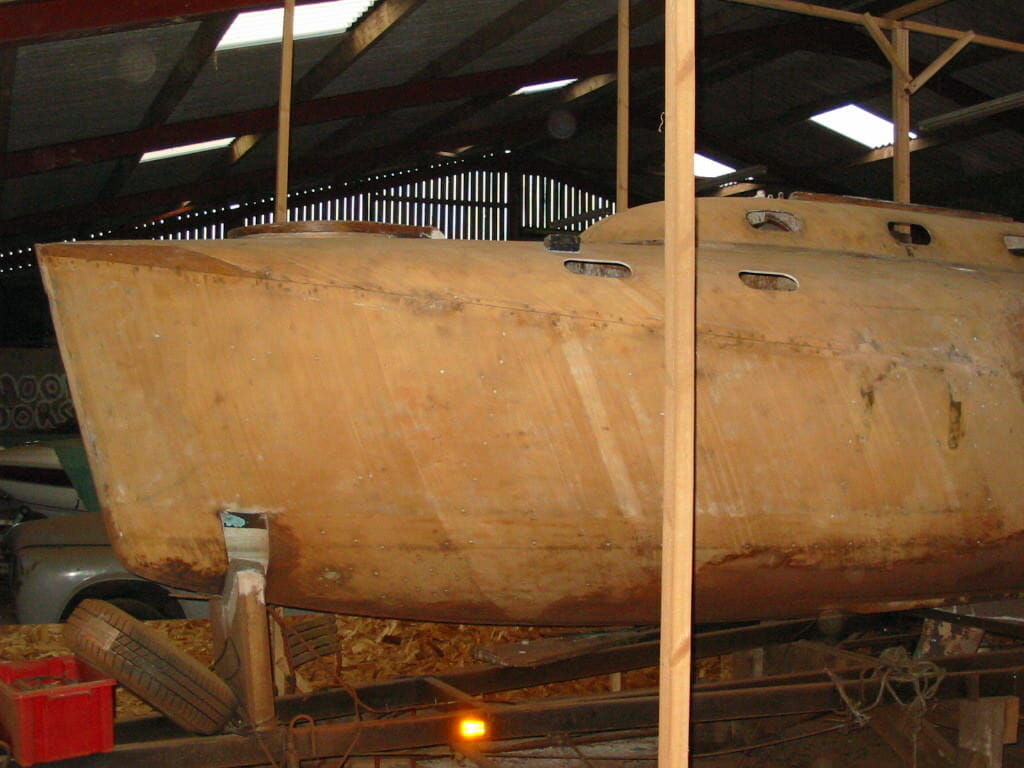 Nearly stripped and ready to Paint

Once all the dirty work had been completed the boat was moved to a second “barn” that was clean and dust free to allow painting and other work to be undertaken. 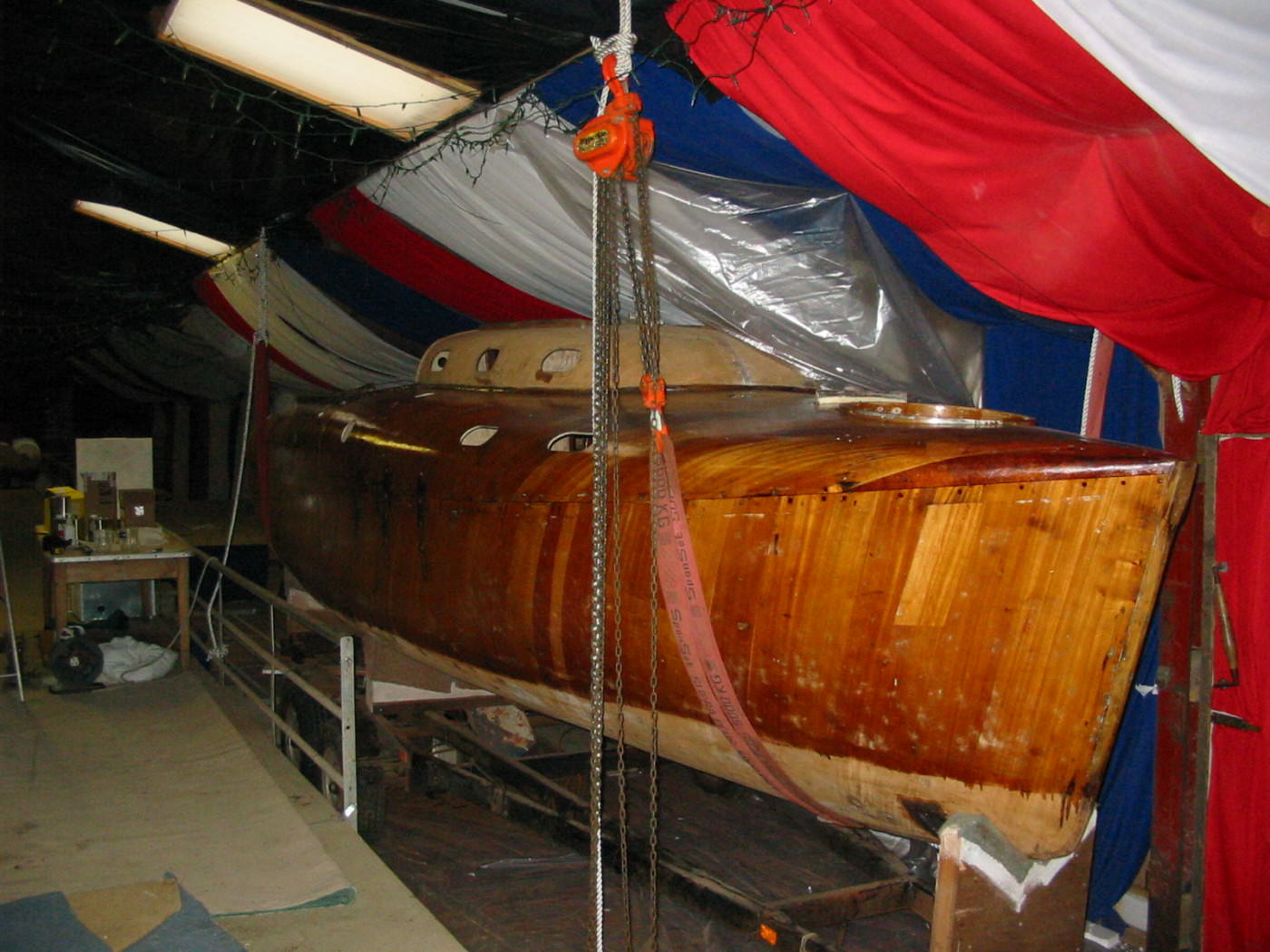 It was now time to begin the reconstruction phase of the restoration, after a trip down to the boat show the descision to purchase a Vetus 11 horse diesel engine was made which meant the cockpit layout could be decided upon allowing for the engine, the engine bearers were altered to fit the different feet positions and to try and get the engine as low down in the boat as possible. 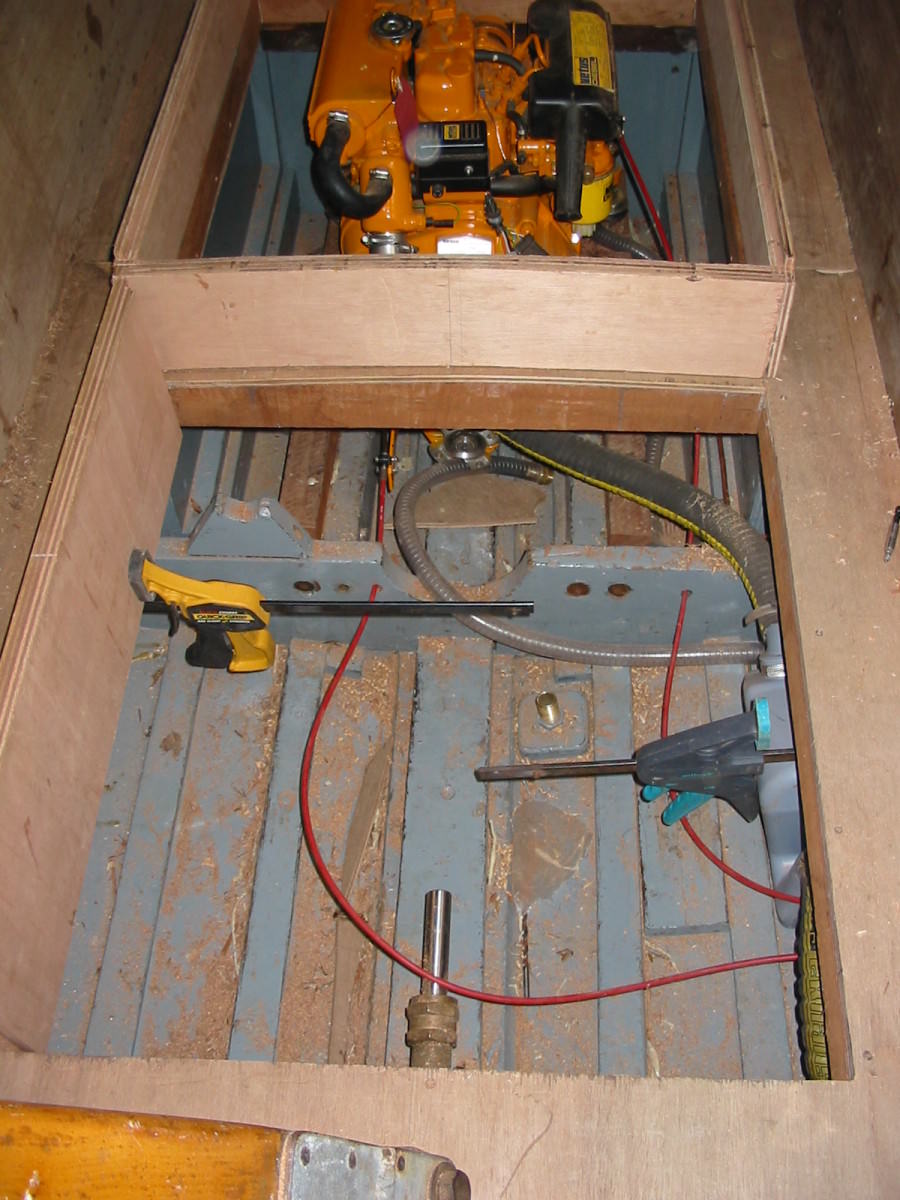 Being from Yorkshire I chose the latter and sourced a ford Sierra propshaft from the local scrap yard which was handed over to my mate who produced various couplings to allow it to bridge the gap between engine and shaft. 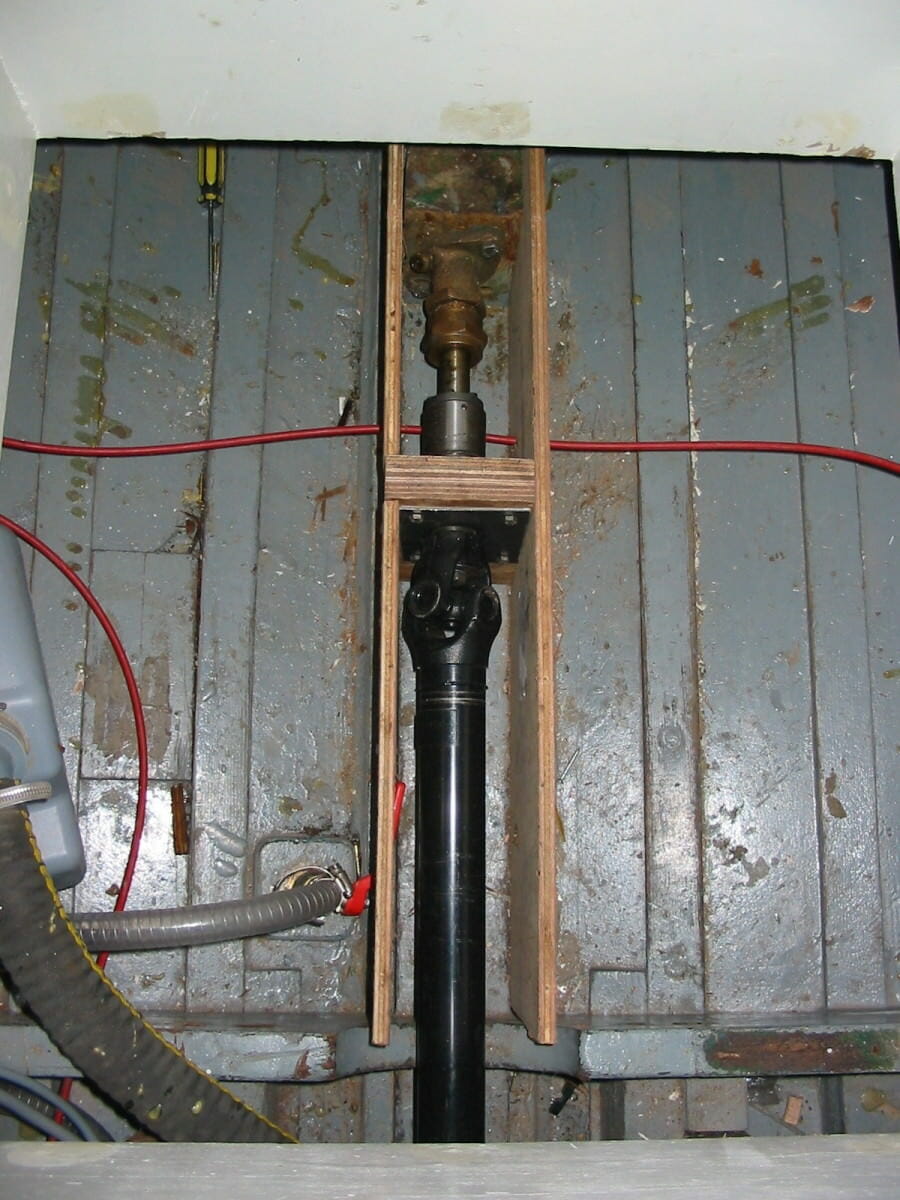 This was also the time when I turned my attention to the keels when inspecting them it became clear that they were very corroded and needed to be dropped out for further investigation. Again the association came to the rescue in the form of “Keels by Donovan” (now revised and available from Trevor) by following this manual both keels were removed single handedly and sent for shot blasting before being metal sprayed and epoxy coated. 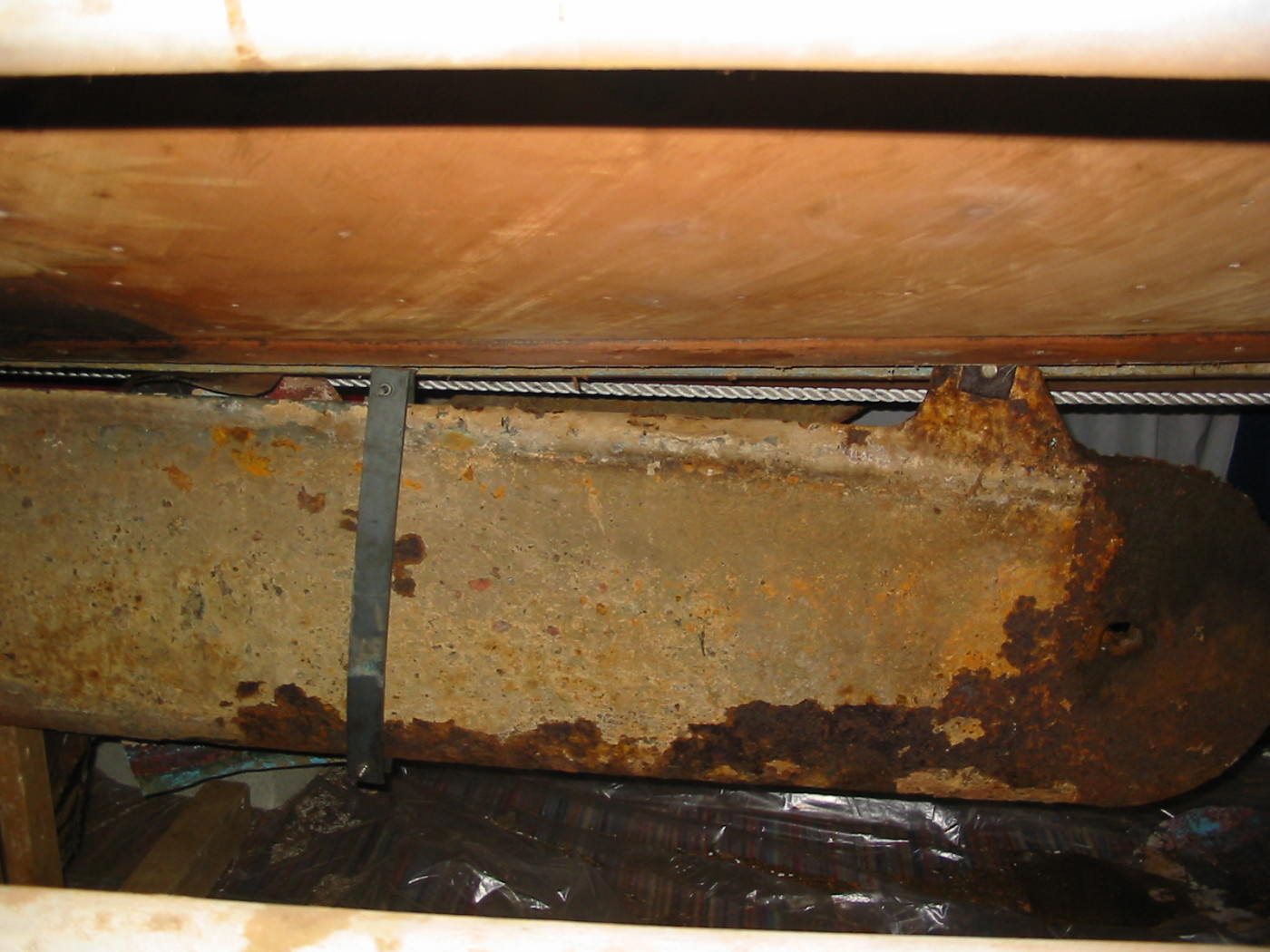 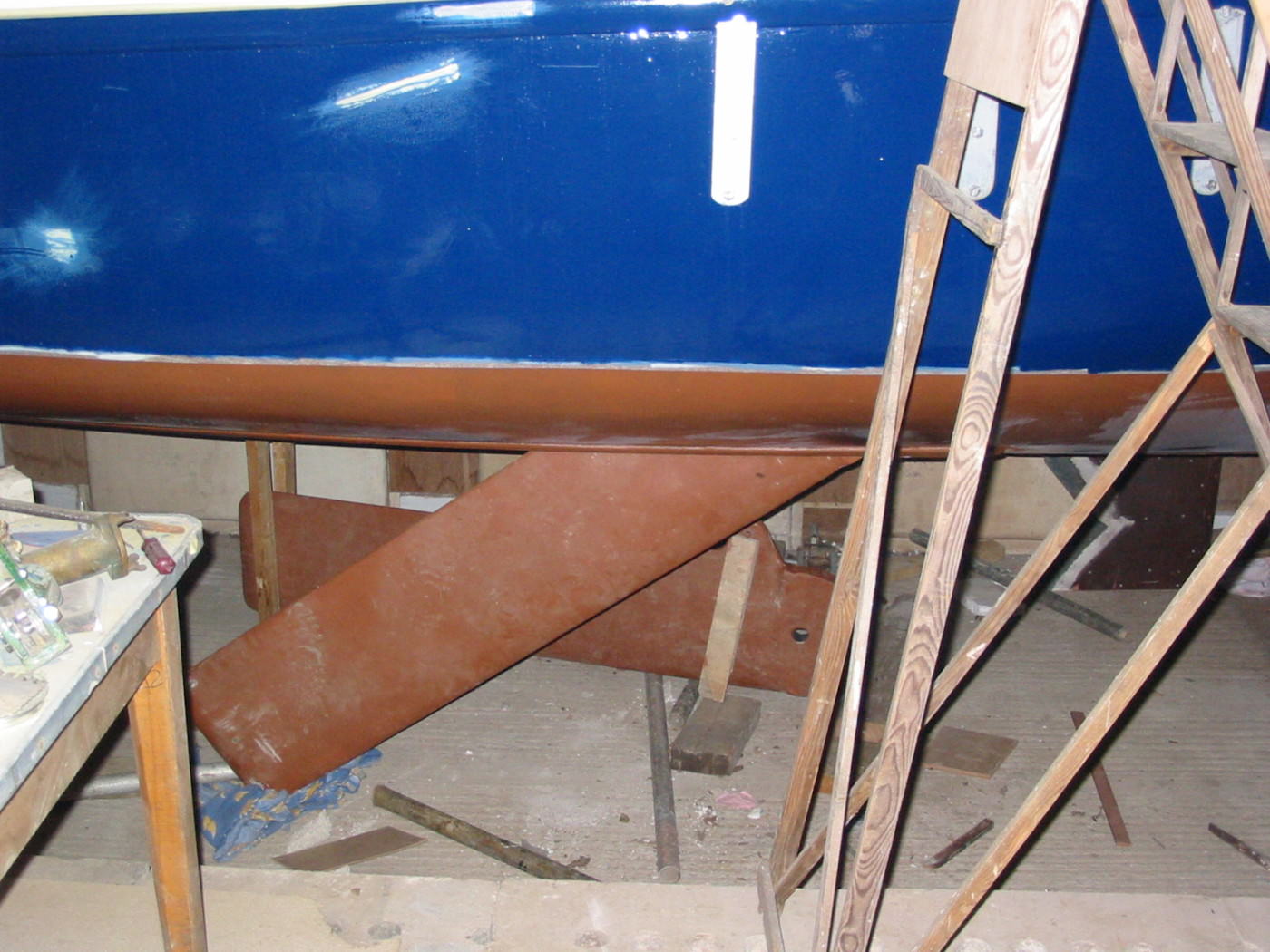 The question of how to coat the hull was considered and after some reading and research I decided to use SP resins eposeal 300 as the primer coat followed by copper coat anti fouling on the hull, varnish on the blister and International toplac on the decks. This combination achieved a good finish even with my limited painting skills. As well as the hull I needed to spend time on the mast which was in a sorry state with rot to the foot and some splitting along its length  the standing rigging was also past its sell by date, after some correspondance and a day sailing with Peter Davidson (Baby Seal) I decided to splice a piece into the bottom of the mast taking the opportunity of lenghtening it by a couple of foot to allow me to put a decent kicking strap in place, before I could do this I needed to source some pine or spruce that had good straight grain and was well seasoned, not any of your modern Kiln dried stuff, so it was down to the local reclaimation yard who happened to have just what I wanted. Back to Henrys workshop to machine int planks that could be laminated using epoxy, I used a home made scarfing block to produce a 12:1 v in the mast and a corrosponding socket in the new foot piece the two bits were then screwed and glued together. 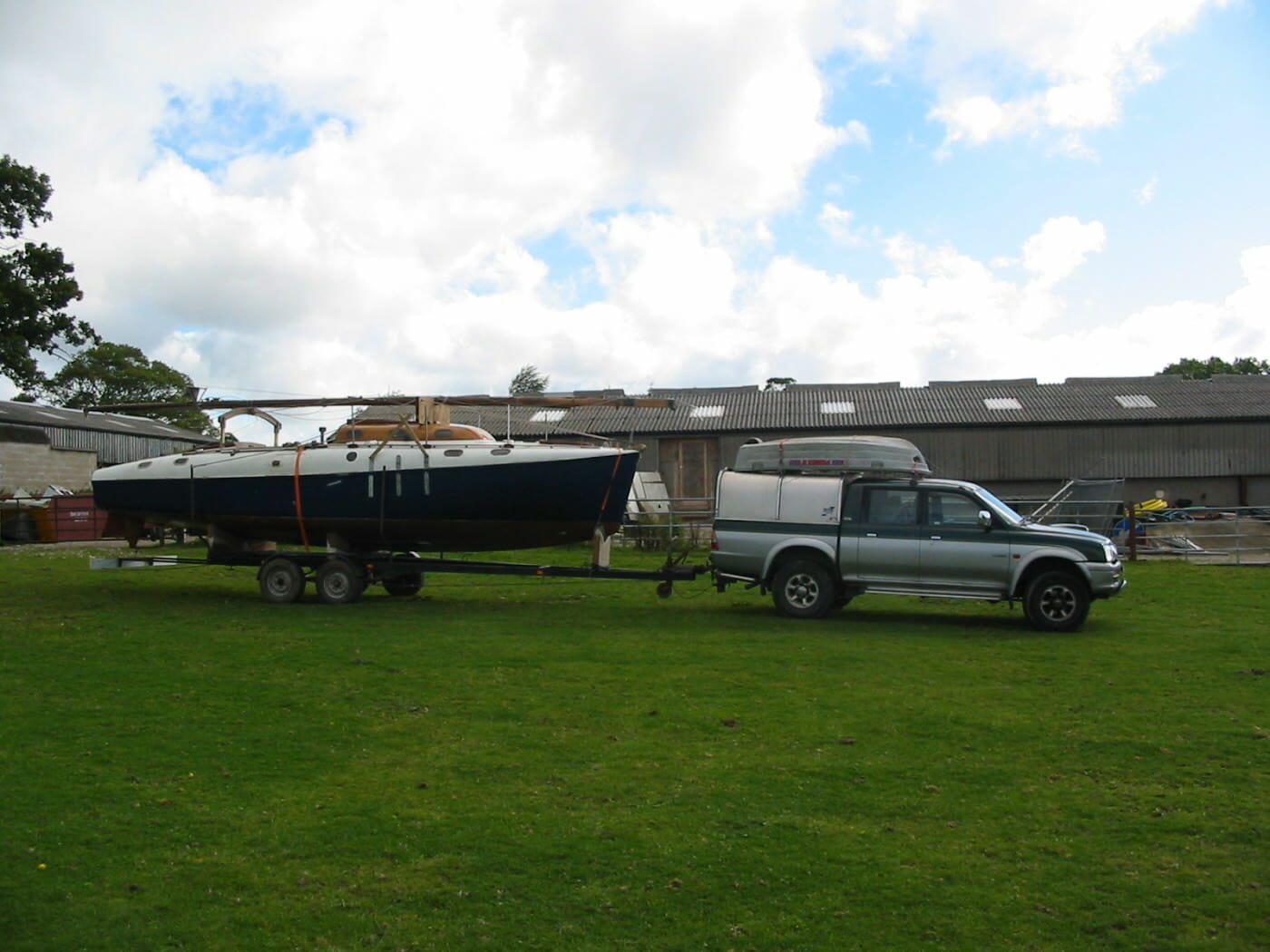 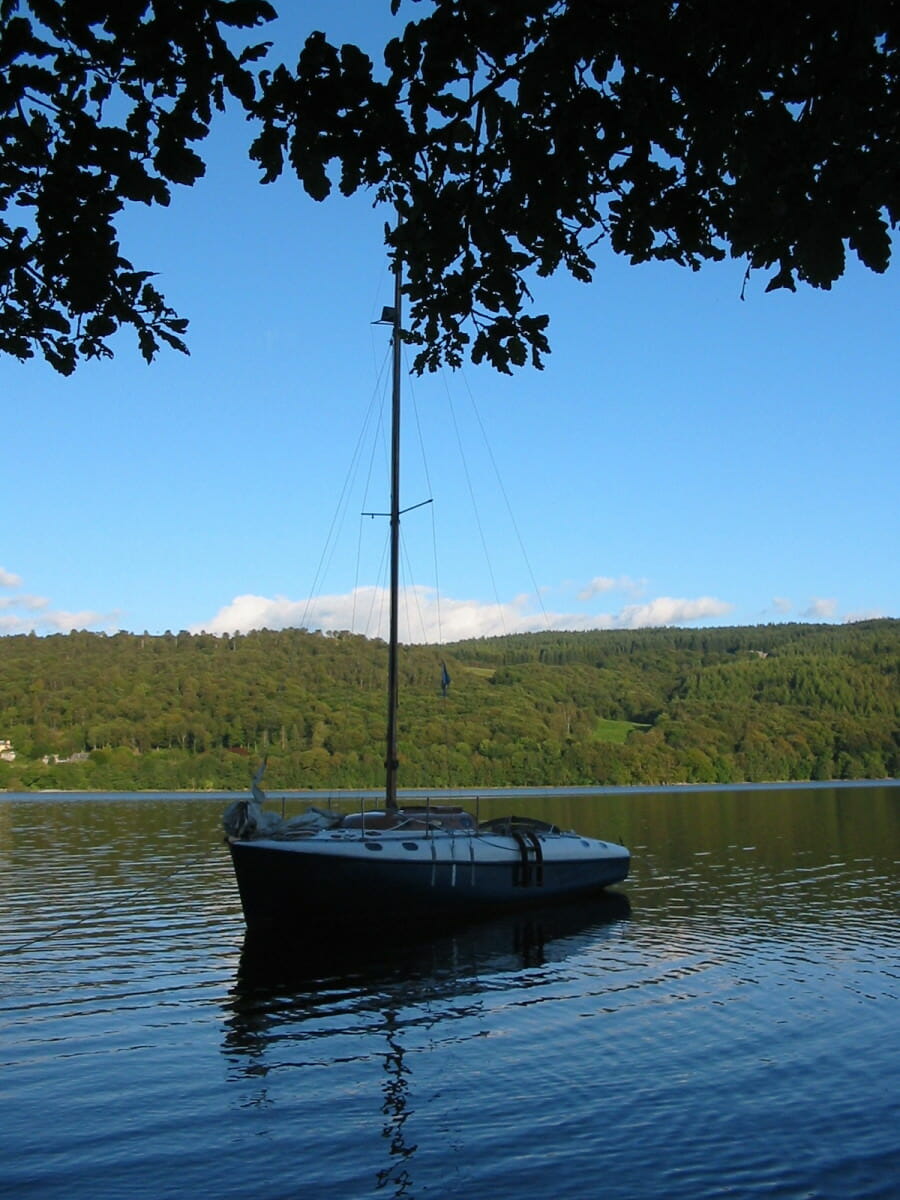 The launch on Coniston was eventful with the use of the slip at the Bluebird cafe and the boat hire centres landrover which needed to be reversed in so that the water was half way up the rear door. Leaks were discovered from around the sand keel area but not enough to cause too many problems just wet feet in the fore cabin. As always Mourne Goblin attracted many comments, why is it that wherever you go you meet someone whose sailed or owned an Atalanta, as a shake down weekend I couldnt have asked for better weather enough wind to allow me to blow out the wrinkles in the sails but not enough to scare the many visitors that came on board at different times. 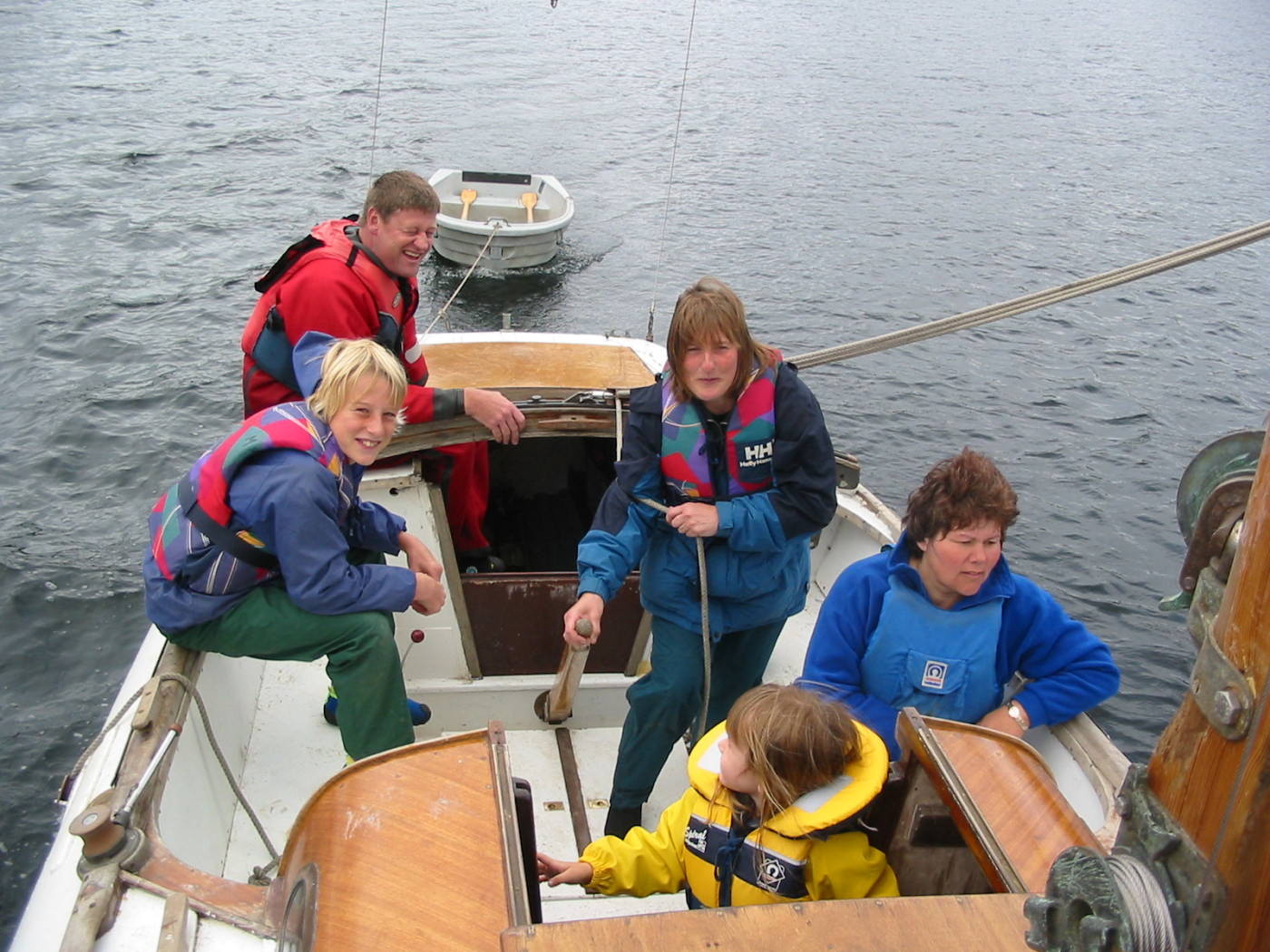 After the weekend on Coniston it was back to the Barn to continue sorting out the issues discovered, first job was to strip off the old sand keel and replace it with a new one. During this I found that part of the problem was because the agba veneers has become detached from the hog in places due to the break down in the glue line I decided to router out a groove in the inner hog and drill a number of holes along its lenght so that when I replaced the sand keel I would be able to inject epoxy resin to run along this groove and penetrate into any voids regluing the veneers. The Sand keel was refitted bedding the edges onto sikaflex and using screws at about 4″ centres (thank goodness for cordless drill drivers)

Once this had been completed it was time for the tow to Scotland and launching into the Clyde at InverKip, all went well with suprisingly few problems during the weekend except for the engine which refused to maintain power eventually this was traced to a leak in the fuel system allowing air into the system. We were now all ready for the first real test a week living on board to come later in the year. 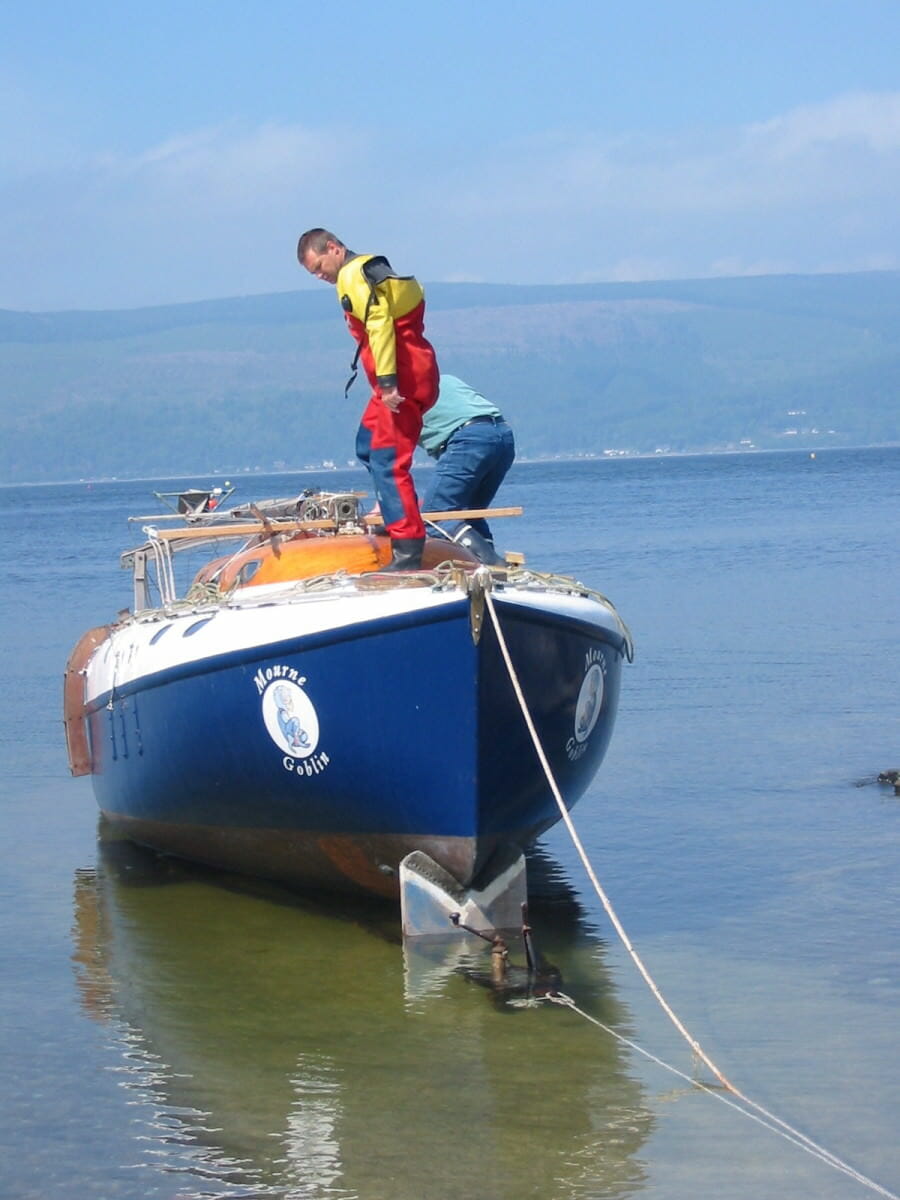 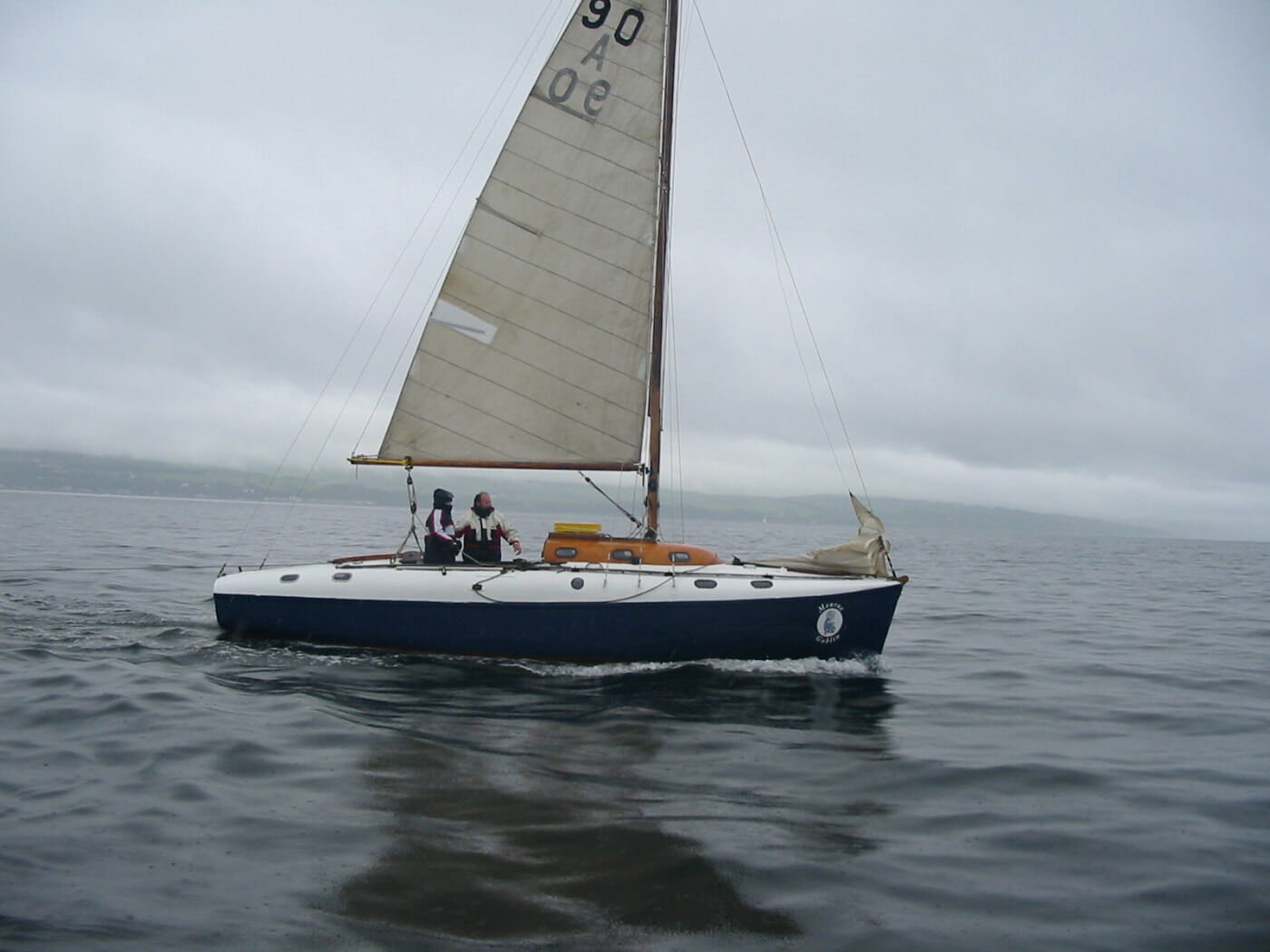