See also the poston Atalanta Handicaps for use when racing 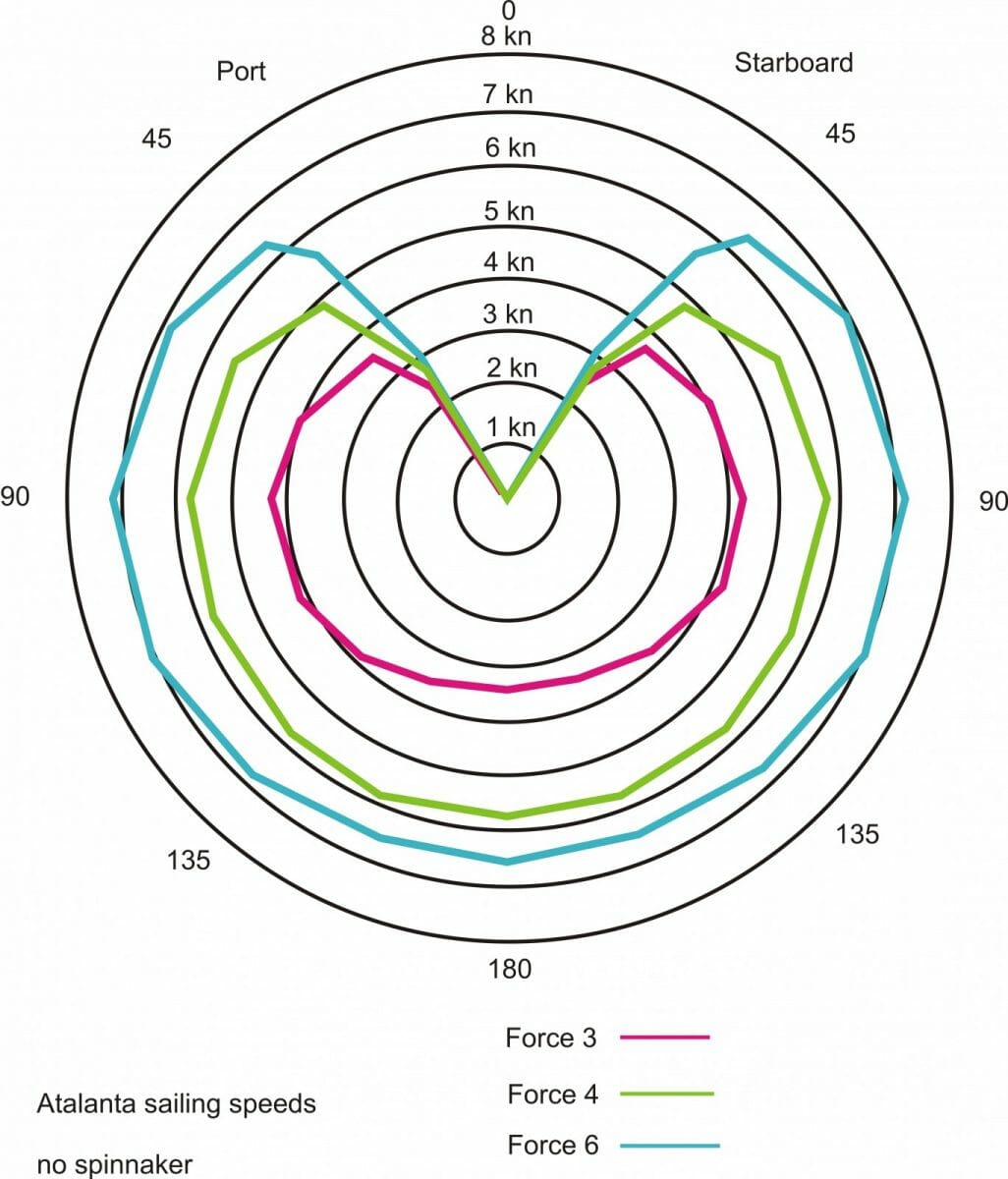 Both the Atalanta and the Titania are capable of making swift offshore passages. Their weakest performance is in Force 3 or less, and that has led some people to claim that the Atalanta is slow. I don’t agree that Atalanta’s are slow.

T10 has frequently sailed in company with A9, and made fast offshore passages together. On a passage from Falmouth to Penzance, which involved reaching and beating, in company with larger boats which left at the same time, we arrived together before the 35 footers, causing one of them to comment “those boats are fast! What are they?” as they arrived to find us already moored.

Going to windward in light airs we make about 3.5 to 3.7 knots. I have recently been sailing in these conditions with one keel fully raised which does seem to lift the speed slightly. Off the wind the spinnaker helps, particularly if it is a modern spinnaker which will remain filled when reaching. A folding or feathering propeller is most effective in these conditions. The benefit being that the extra 0.5 knot gained by the lack of drag encourages you to continue sailing rather than starting the engine. These are the Atalanta’s worst sailing conditions. She is a light boat with a small rig. 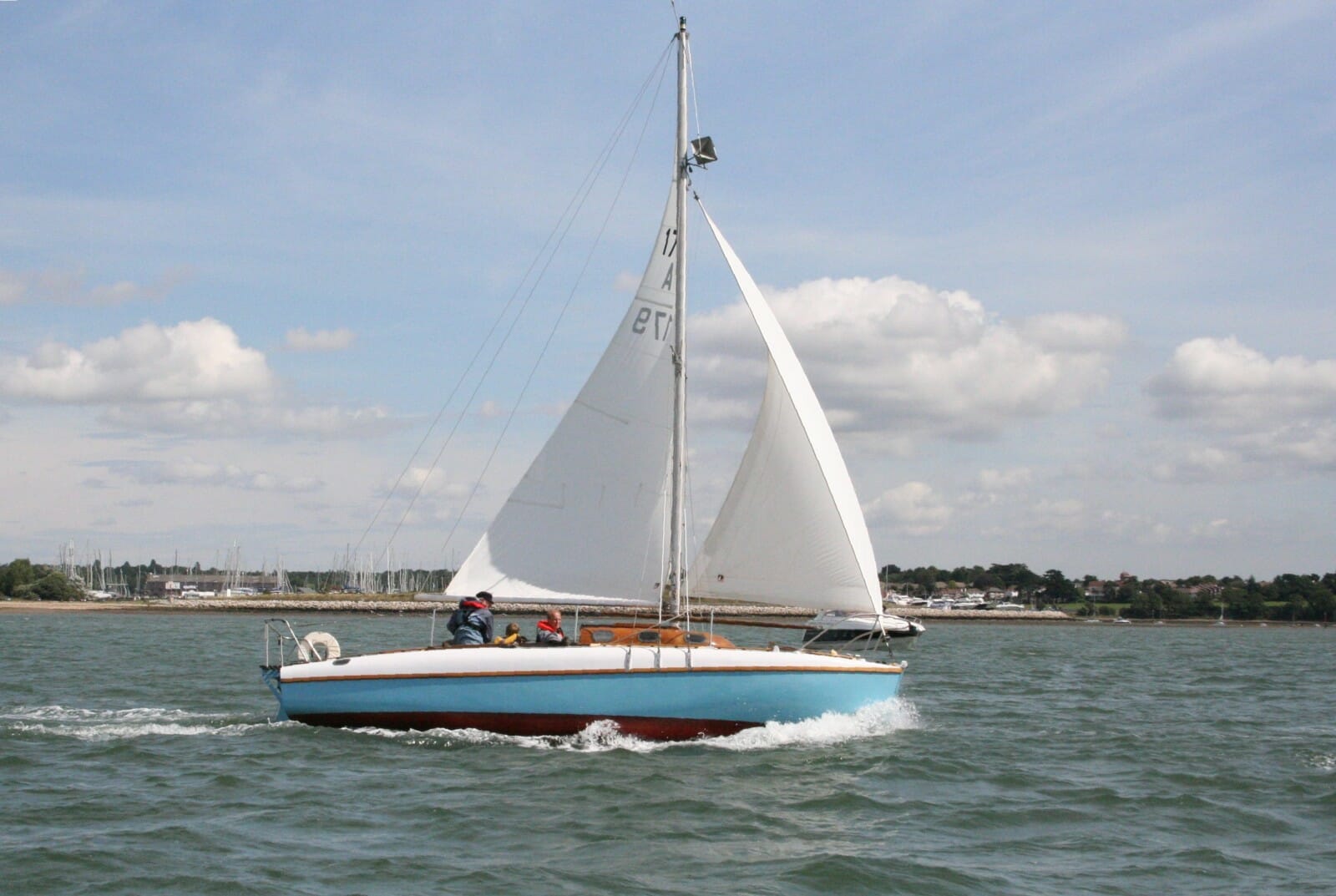 With a wind of Force 4 or more the Atalanta sails well. being able to sail at 5 knots to windward, and slightly faster off the wind. Off wind sailing with a spinnaker is a delight in these conditions. In a good force 4 verging on force 5 the boat should be reaching at hull speed without a spinnaker. 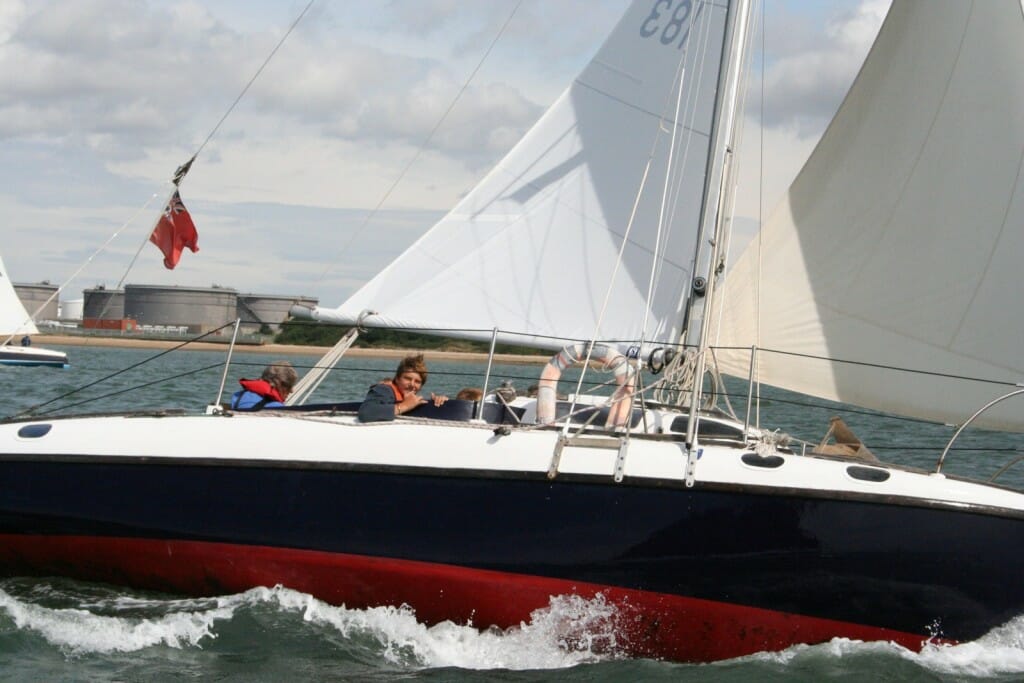 A183 beating to windward in a Force 5

When the wind reaches force 6 an Atalanta will sail to windward at 6.5 knots with well reefed main and working jib. She will make hull speed off the wind without a spinnaker.

Like all bermudan rigged yachts the Atalanta sails best off the wind with a spinnaker set.

With spinnaker flying in a force 6 she is supposed to plane! Presumably with keels partly raised like a dinghy. I have never seen this done, nor do I know anyone who has actually dared to do it. However it is supposed to be something which Uffa Fox would do.

There is a slight difference in sailing performance between the mast head rigged and 3/4 rigged Atanantas, particularly in lighter winds. However the differences are insignificant in stronger winds and might actually favour the 3/4 rigged boat when the wind increases.

Early Atalanta’s fitted with a Mk 1 rudder blade were susceptible to weather helm. However with one of the later rudder blades, there should be no reason for an Atalanta to suffer from significant weather helm. Should one exhibit weather helm then the first thing is to ensure that the rudder blade is fitted the correct way around. (It will fit backwards). One advantage that Atalanta’s offer is the ability to raise the keels slightly, which moves the center of lateral resistance back, allowing weather helm to be eliminated.

How does one perform against the other? Well their performance is  similar, but all other things being equal, the Atalanta is slightly faster. The Atalanta has sleeker lower lines, and therefor is more aerodynamic. The Titania has room to carry more kit, so will probably end up heavier. The Titania also has a shorter boom, and narrower mainsail to go with it.