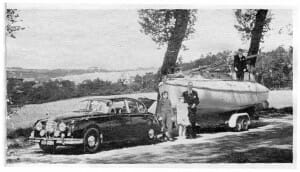 The Atalanta is the original trailer sailor. From the very beginning in 1955 owners were regularly trailing them to the south of France for summer holidays. In those days large family cars and the series 1 Landrover were used to tow them both in the UK and abroad. 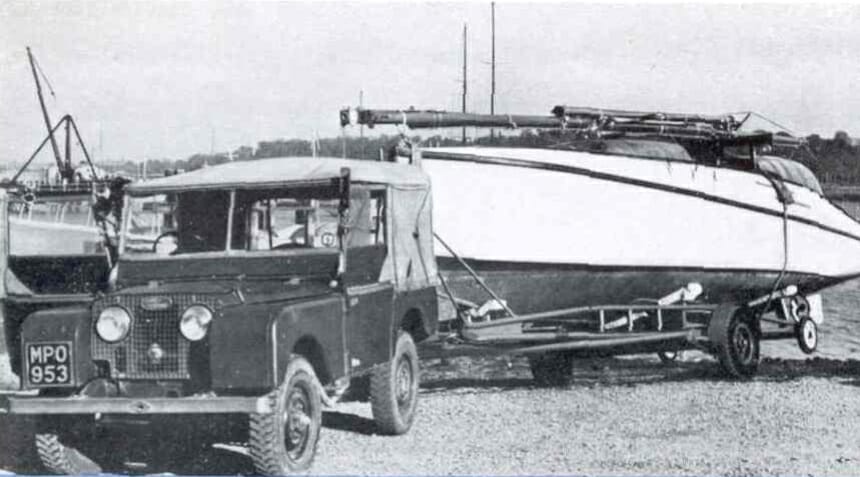 Launching an Atalanta in 1955

Trailability has always been a great advantage and enabled the Atalanta owner to start and/or end a cruise at almost anywhere in the country, or abroad, with economy in time and money. Also a boat could be brought home for the winter making it easily available for the annual overhaul and saving winter berthing charges.

Of course it is a a large boat to trail, at 26ft 5 inches long, plus the rudder and trailer draw bar. So perhaps you should not think in terms of launching it for an afternoon sail, but think in terms of trailing to a cruising ground for a weeks holiday. Longer is better of course, and the longer you can go for, the further you might be tempted to go!

On the hard at Itchenor

Scotland, the Morhiban, the Mediteranian, and the Adriatic are all places where Atalantas have reached on their trailers, and not just in the past – they are still doing it.  Many of these trips have been written up in the Bulletin:

Getting the balance of the boat on the trailer is critical

The problem of high-speed towing was taken up by PEH Haggarty owner of A57, Bay Bea. After a holiday in Britain, where he bought the boat, he had her shipped to Milwaukee on Lake Michigan and trailed 170 miles to his summer home at Fish Creek on Green Bay, an off-shoot of Lake Michigan. He was disappointed with the boat-trailer combination which he said at speeds over 35 mph ‘bobbed and fish tailed’ badly. Faced with trailing the boat 1235 miles, to his main residence in Texas at the end of the holidays. He set about improving the trailing properties and found that shifting the centre of gravity of the load on the trailer forward by moving the boat about one foot nearer the coupling completely cured the trouble. He was then able to trail safely at the legal limit of 60 mph.

More recently owners have found moving gear on the boat to get the correct nose weight is key to fast towing. Stabiliser bars help as does a three axle trailer which is inherently more directionally stable than twin-axles.