Since lifting Mourne Goblin out at the end of September much work has gone on to try and solve some of the issues highlighted during the season.

Ive added a layer of agba under the deck in the forecabin to try and stiffen it, the fore deck has been stripped back ready for epoxy and paint to be applied and at the same time Ive removed the toe rails in order to have new ones made.

It has also been necessary to put a few patches in place one where the seacock for the toilet outlet had crushed the outer layer of veneer leading to some leakage, 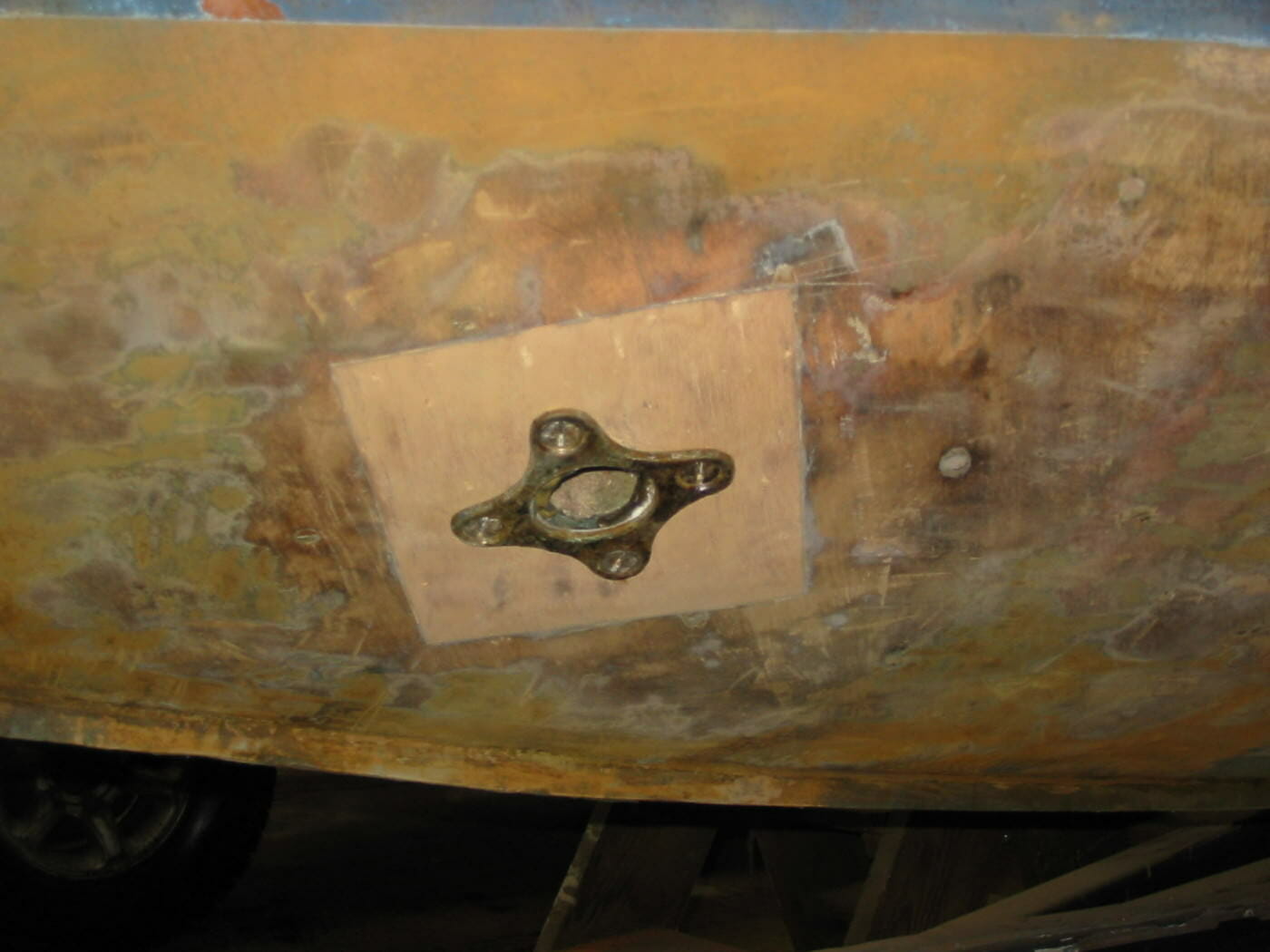 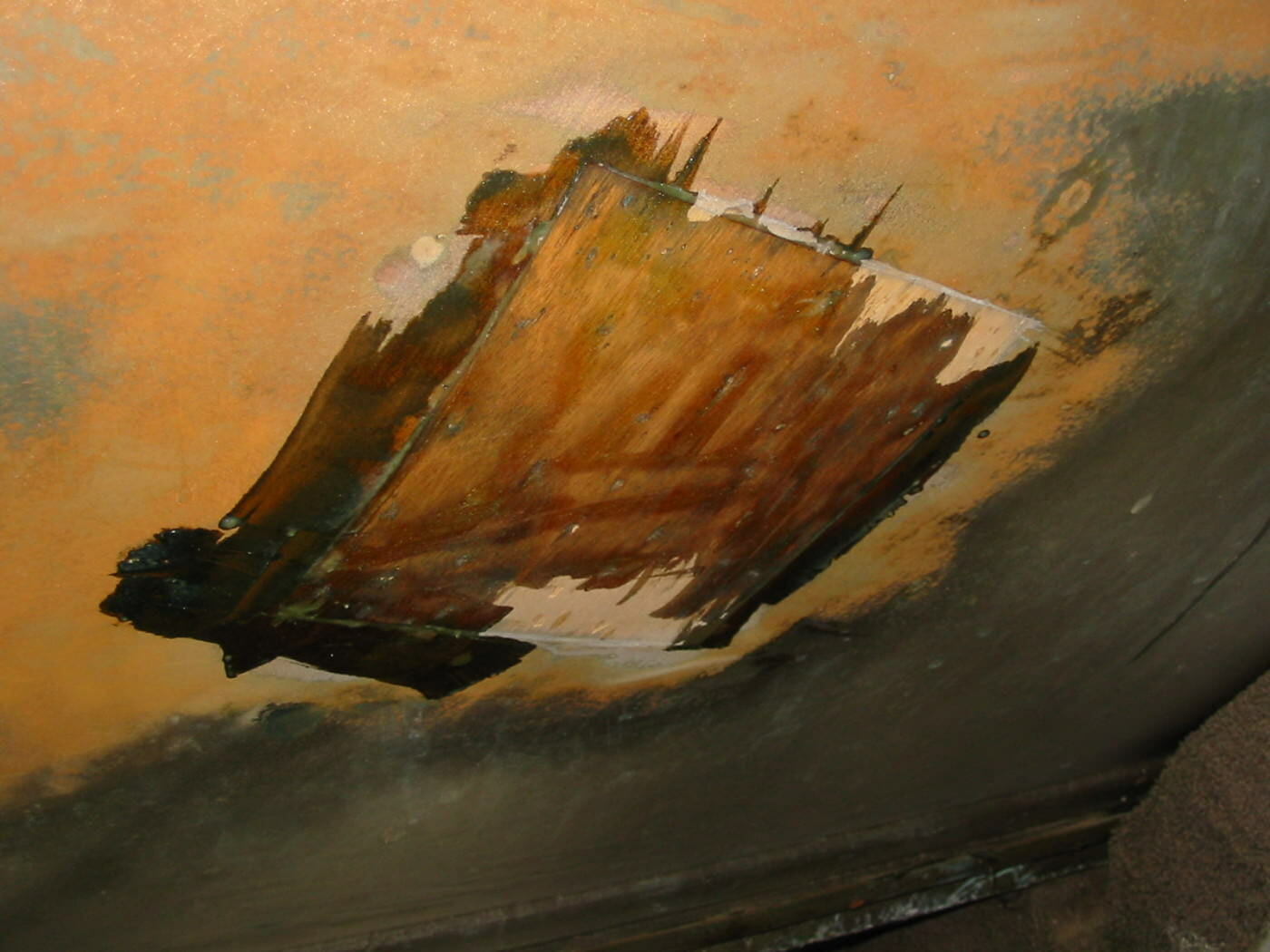 and finally on the port side in two places where water had become trapped under the hull to deck joining strip causing some softness to the veneer. 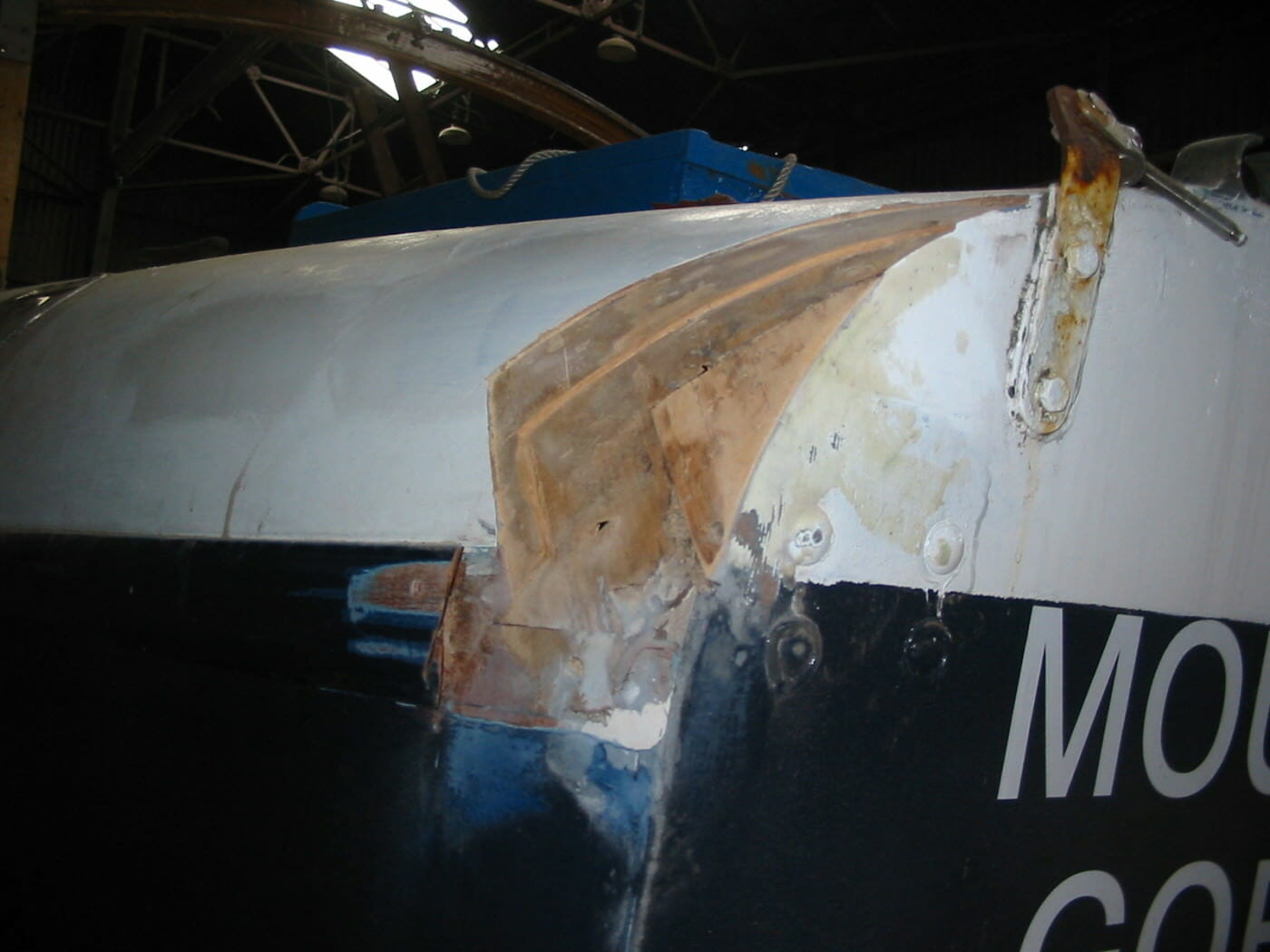 Over the next few weeks Im hoping to put the epoxy and paint on the decks, rub down the hull and apply a couple of coats of epoxy followed by Copper antifouling epoxy refit the toe rails and have her back in the water early April thank goodness for flexitime and an understanding wife.

The flexible epoxy has arrived from reactive resins along with the copperplus anti fouling Ive begun to rub down the hull to give a good key for the coatings its easy to see wheres been done as it soon becomes shiney against the green of the corroded coppercoat. 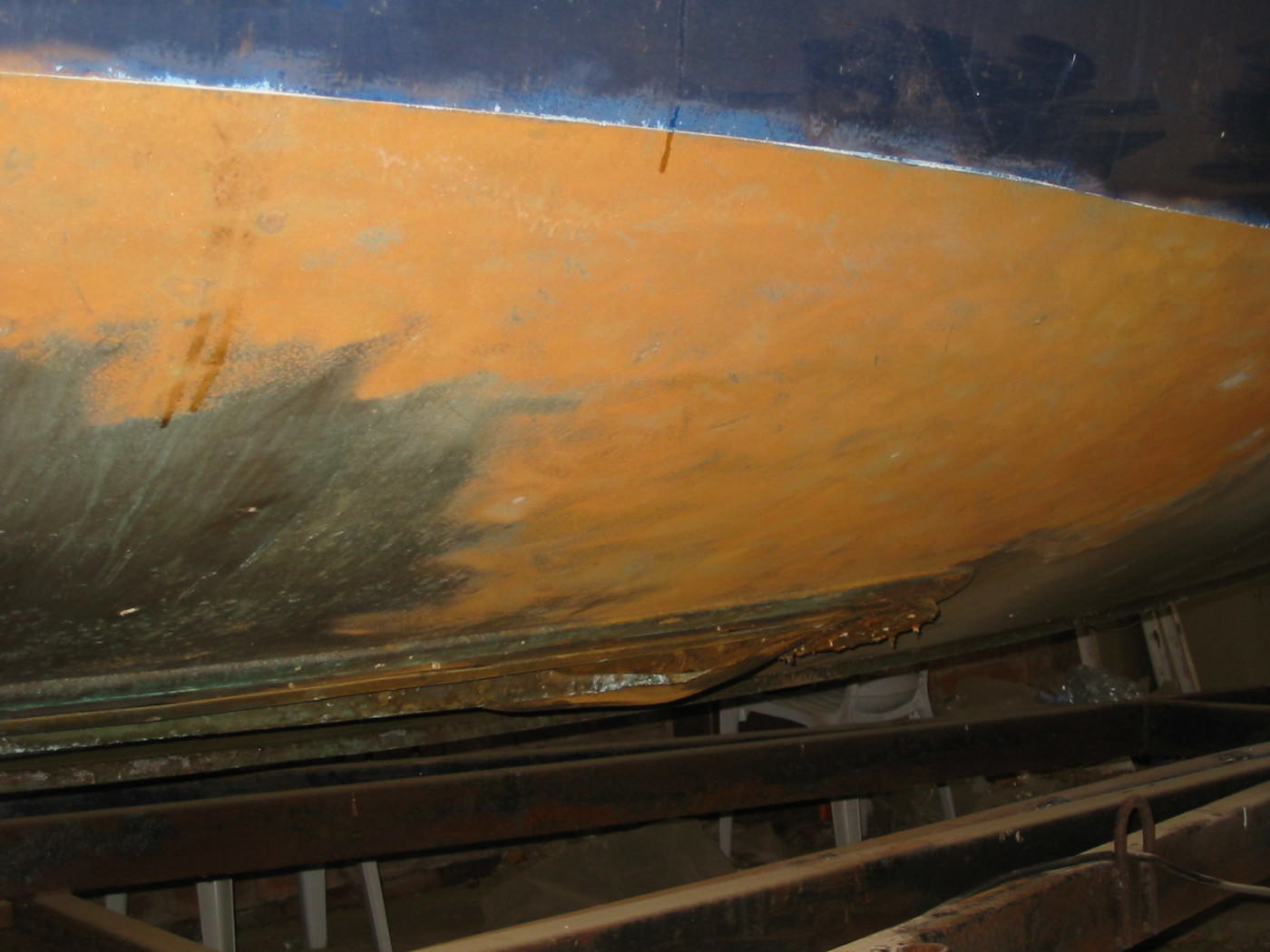 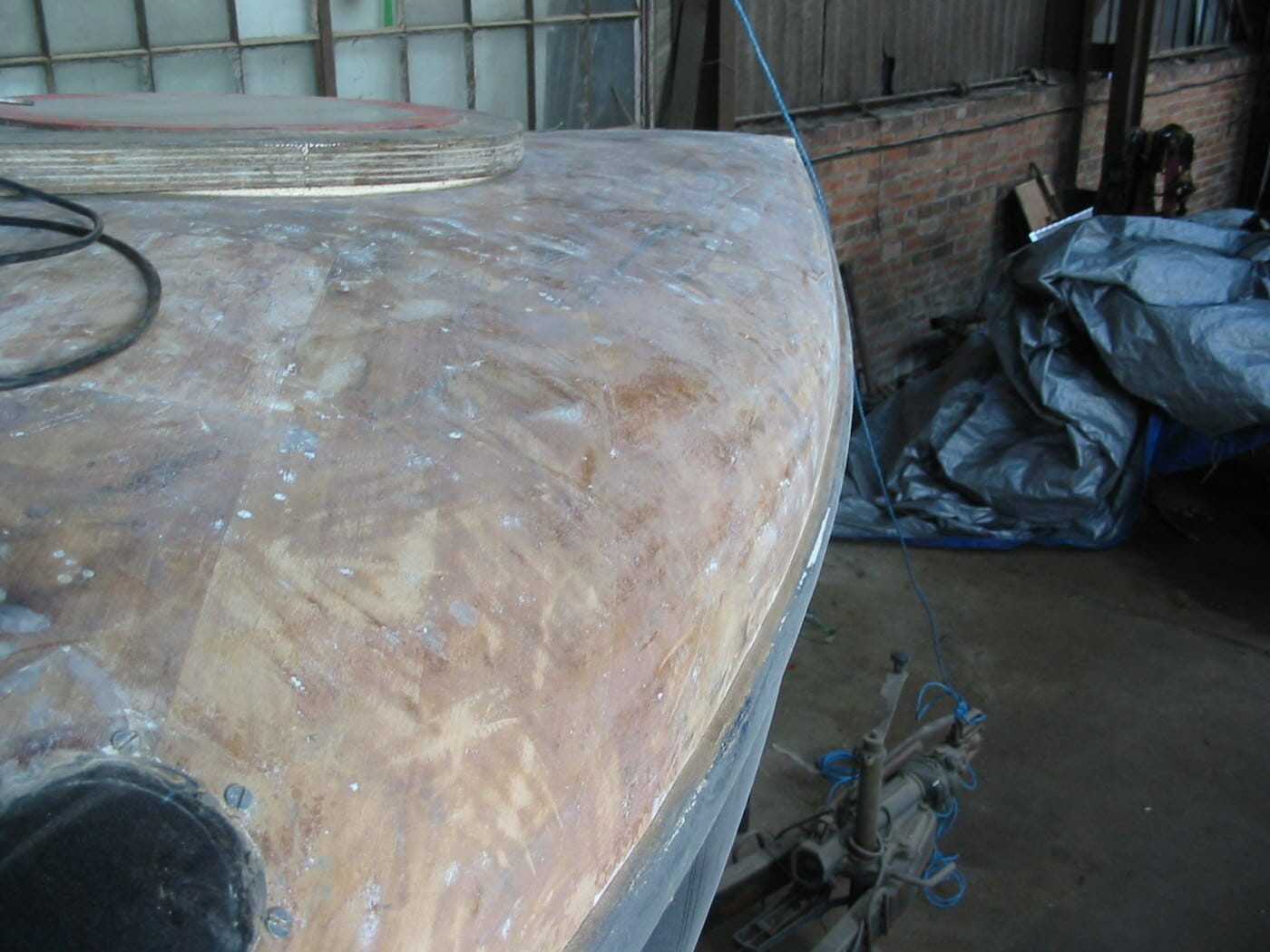 Ive managed to coat the deck using flexible epoxy from reactive resins, it certainly seems to have more elasticity when you peel it from the roller tray it remains in one piece and can be bent rather than cracking which hopefully will help it to flex with the deck. The hull is just about sanded down ready for coating which fingers crossed Ill get round to doing this weekend. As usual the season has come before the maintainance is complete but with good weather Im looking forward to been able to do some work whilst sailing. The wood for the toe rails has arrived were using Accoya which if the blurb is to be believed should cut down on maintenance in the future.

Accoya is the result of more than 75 years’ research and development that have brought together a long-established and extensively researched wood modification technique, acetylation and leading-edge technology to create and make this extraordinary “new wood species” commercially available for the first time.

Accoya is set to become the material of choice for exterior applications can can be used for virtually anything from windows to doors, decking to cladding or even applications which are presently only feasible with non-sustainable materials.

Spent yesterday applying a couple of coats of epoxy to the hull,looking good, will need to use next weekend applying primer and the the copper plus anti foul. Time running out if I want to be on the water for the long April/May Bank holiday weekend, especially as Im away with Trevor for the week mid April.

Managed another few hours today, lifted Mourne Goblin using the lifting strops and a 3ton chainblock attached to the gantry of an overhead crane which sadly no longer works, the demise of british engineering hasnt all been bad at least it means I’ve a shed to work in. 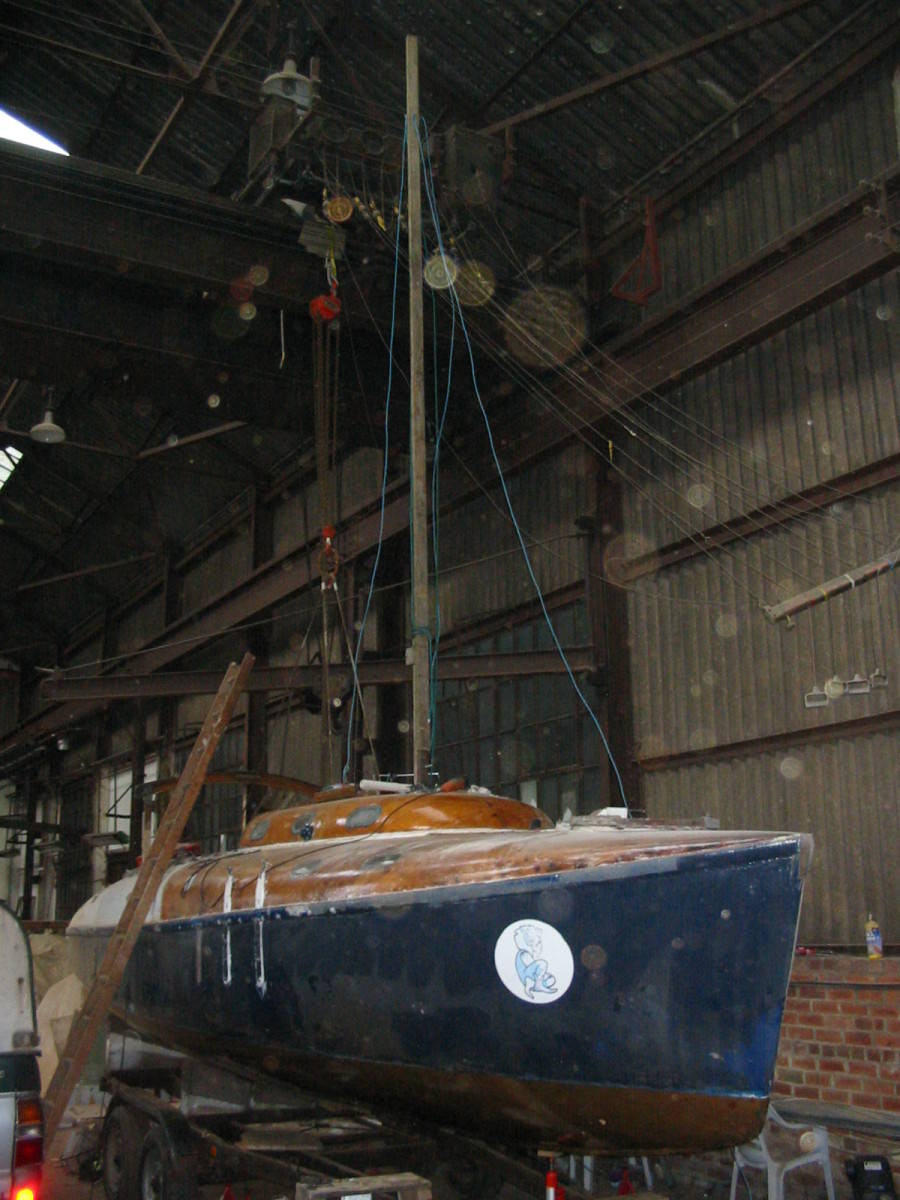 once the trailer was moved to allow me access to the areas of the hull that were covered by the chocks I lowered the stern back onto the trailer and propped the bow so that I was not working under a suspended load allowing me to sand down and epoxy coat the rest of the hull. 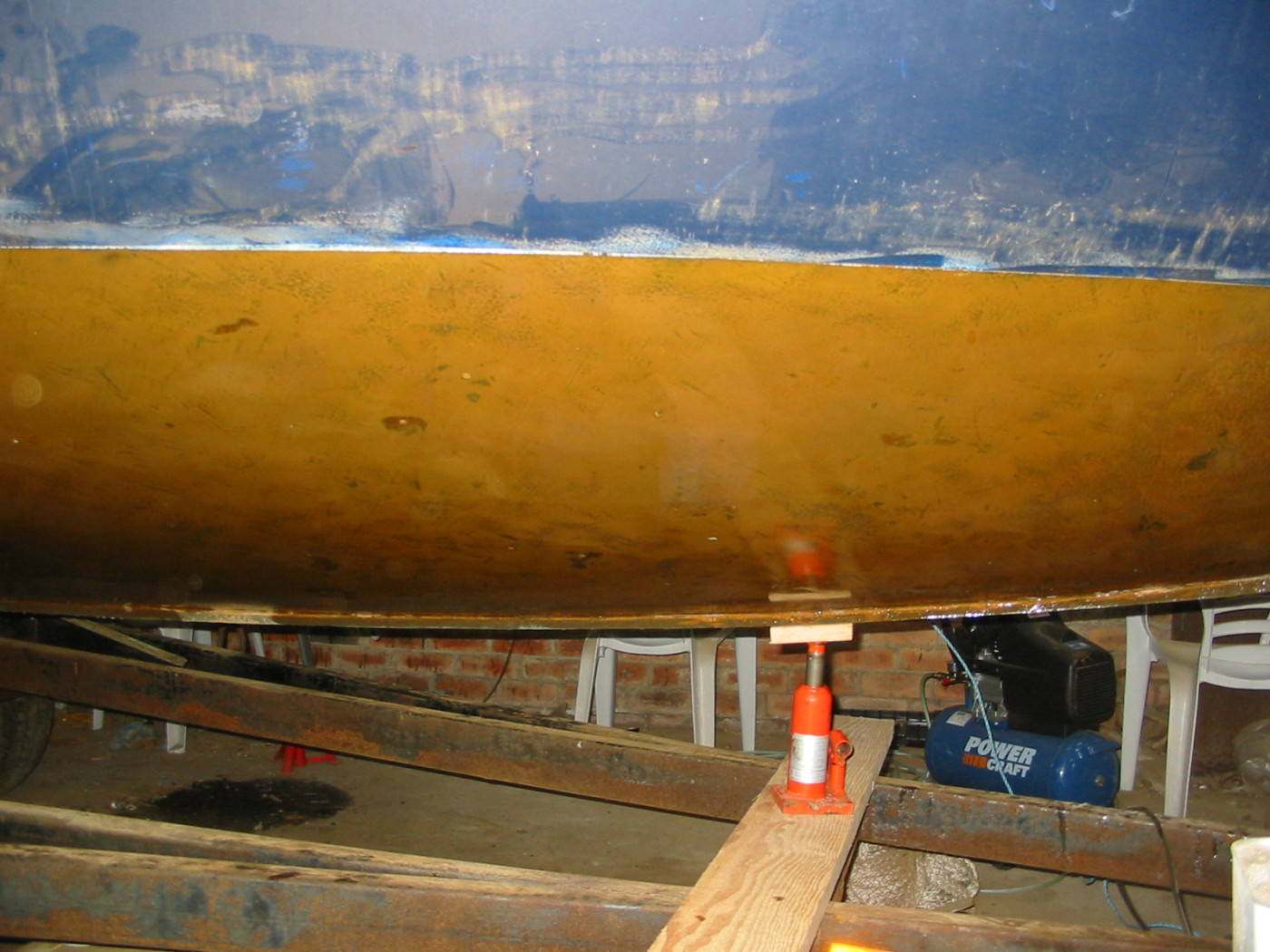 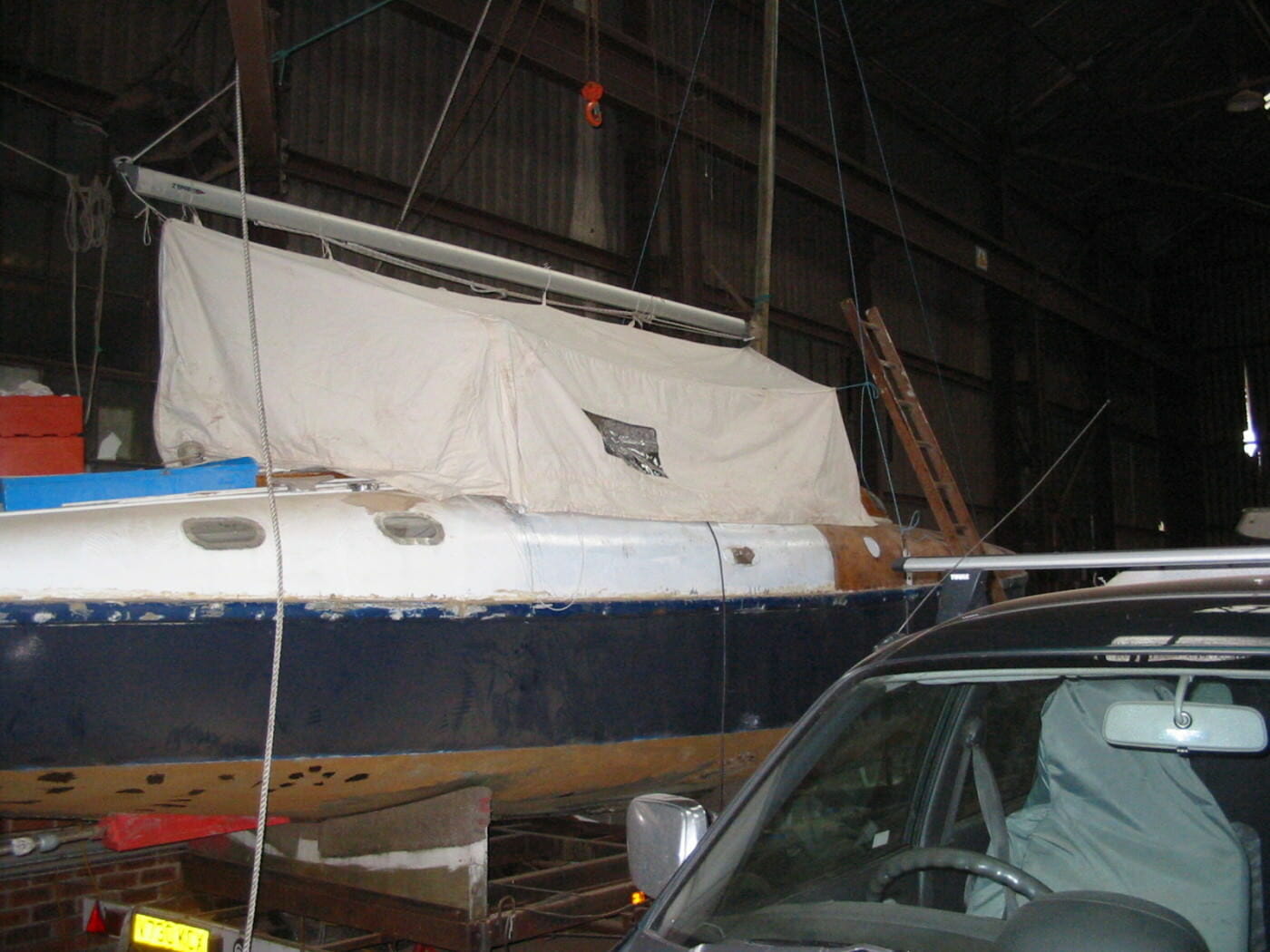 Hopefully this addition will make life on board more appealing for Karen and I may get her to join me onboard this summer.

Managed to get another day in today used it to rub down the hull and coat it with an epoxy primer ready for the final copper antifoul layer which I plan to do on Saturday, once its coated the boats coming out of the shed ready for those final touches before launching which is now scheduled for the long Bank Holiday weekend at the end of April (the royal weddings not all bad!!) 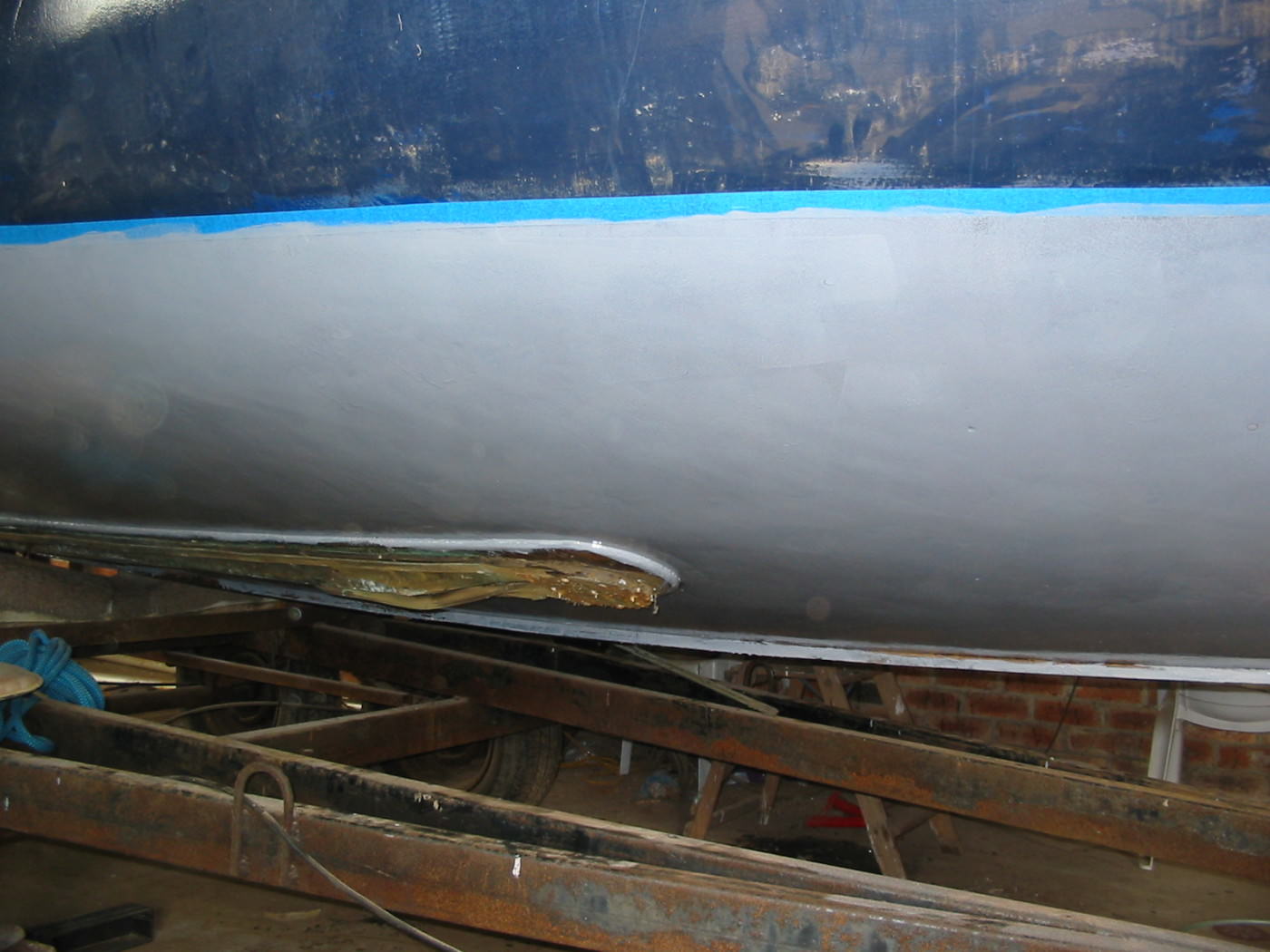 Another successful day applied a coat of copper plus anti fouling went on really easily the pot life is good so there was no rush trying to apply it before it went off, used a roller which made short work of covering the hull also applied some toplac to foredeck. Things seem to be coming together and hopefully by next weekend Ill be in a position to remove Mourne Goblin from storage which will cut down on expense. Looking forward to a busy season although not all my sailing will be on MG hopefully the weather will be good when I join Trevor in Milford Haven next month for a week on T10 hoping to pick up some tips on rigging the spinnaker. Ive also got a week on board an Elizabethan 30 taking her from Gourock to Cork and lastly a pre lay up week around the Clyde in September also trying for a week in August and as many weekends as possible through the season if anyone plans to be around the Clyde let me know and perhaps we could meet up 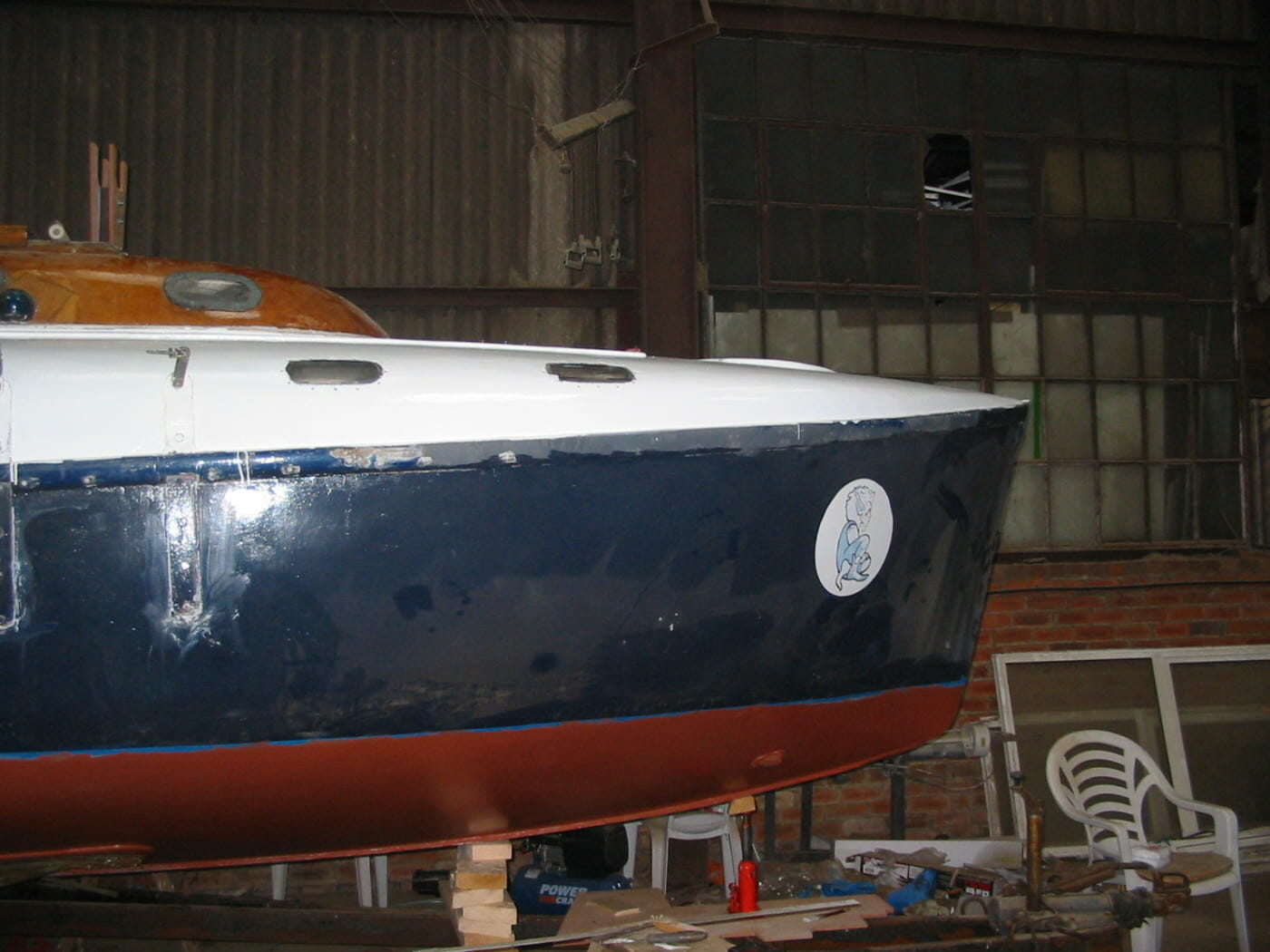 now completed and second coat of paint on the foredeck. The toe rails have been glued up as well. They have been laminated using 4 strips of Accoya and epoxy resin, the shape was achieved by making a jig in MDF using the old toe rails as a pattern the clamping action was achieved by screwing blocks down and hammering in wooden wedges. 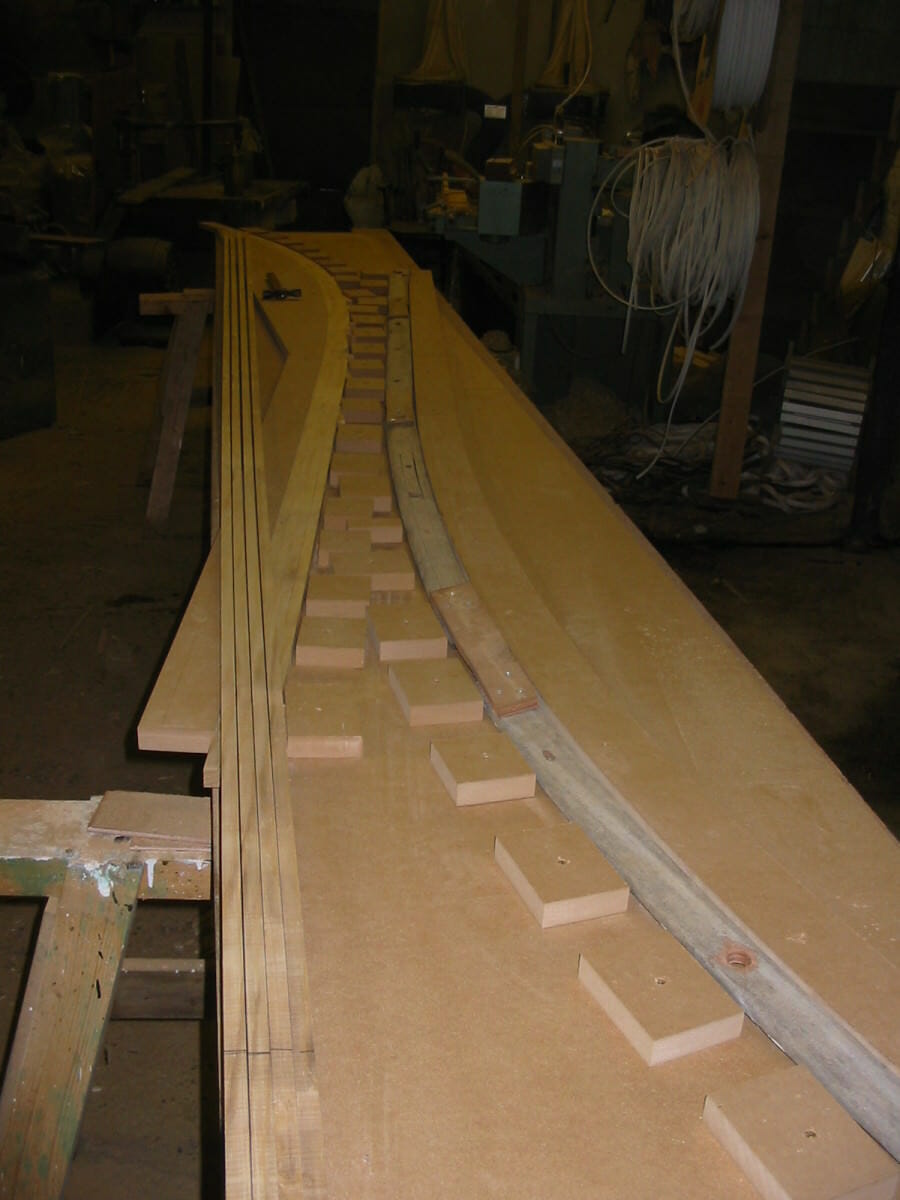 Once the glue has gone off we’ll send the laminated rail through a planer thicknesser and then use a spindle moulder to shape the top and bottom not sure if were going to be able to achieve that aerofoil shape that the originals have.

Boat removed from storage the toe rails have been finished we couldnt get the original shape, due to been scared of wrecking the whole rail as we passed it through the spindle moulder the second time, but have managed to get the topside close to the original and used a router to produce a curve to the underside which gives a pleasant shape just need to fix them to the deck now. The pattern is available if anyone needs to use it or Im sure I could arrange for my Joiner to manufacture some more unfortunately this would be at a commercial rate its about a days work now the jig is made to machine the strips,glue up with epoxy and then shape.

Launch day went well the work on the hull has paid off with many of the annoying leaks appearing to have solved themselves, I still have some keel box issues which will be next winters project but on the whole Im satisfied at the moment I will reserve final judgement until after Ive sailed a few miles and the hull has had time to work.