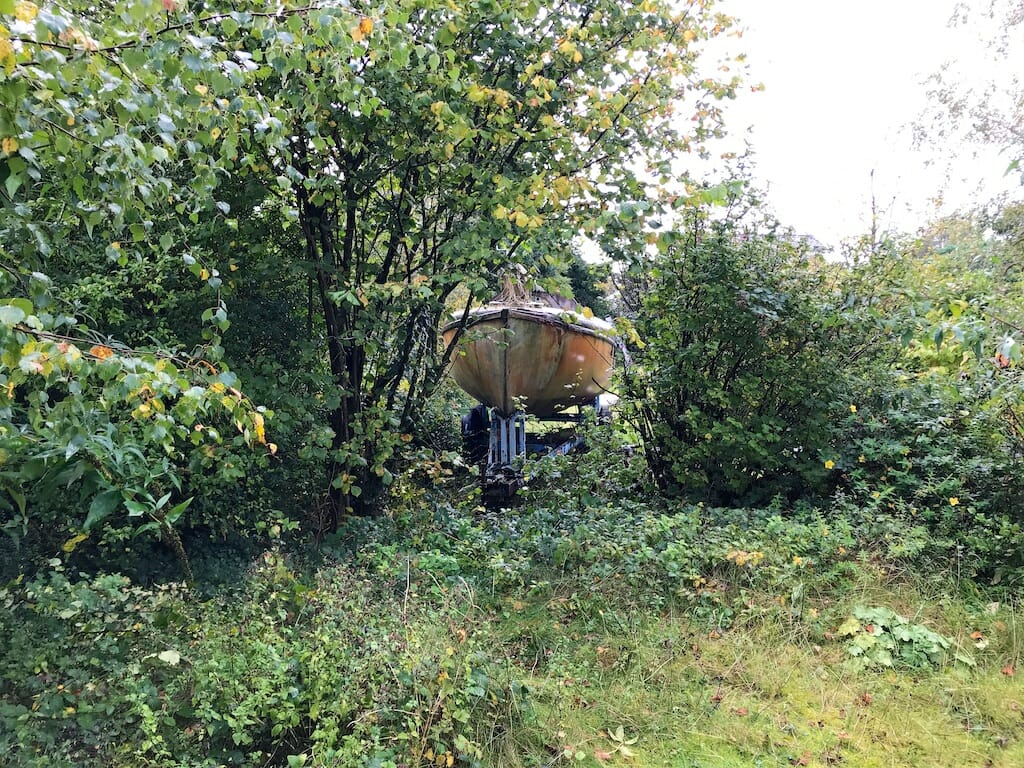 The decision to scrap A154 was taken in October 2020. To all intents and purposes A154 is no more although she lives on through parts salvaged by the AOA to be used in keeping other boats alive. (The hull still exists in fact, exposed to the elements in the Lake District. It has been stripped of all gear and awaits destruction.)

The Fairey Marine register shows that A154 Deannie was delivered to Mr Lay-Chambers on 28th July 1961.  She was fitted with a three-quarter rig and a Coventry Victor engine and based at Hamble, presumably in the Fairey Marine Boatpark.  Unusually all of the bronzework – mast and boom fittings, tracks, fairleads et.al – were chromed. It is not clear if this was done by Fairey Marine or by a subsequent owner.

She passed through the hands of E Saphir in 1964 before being based on the River Severn near Tewkesbury in the ownership of R Rainger from 1969.  Rainger owned her for ten years before selling to Captain Alex Buchanan for £4,500 including trailer and dinghy. Deannie moved her base to Windermere near the Buchanan’s home in Slackhead, Milnthorpe.  Captain Buchanan reported problems with sticking keels and in 1981 and the register records ‘being rebuilt’ in 1981. It is not clear the extent of the ‘rebuild’ at this time and whether Deannie was still being sailed. Certainly in 2000 Captain Buchanan reports that he has stripped the hull and removed the cabintop (blister). He also reported issues with the Coventry Victor and was put in touch with others in the Association for advice.

Captain Buchanan joined the AOA when he bought the boat and Deannie’s membership has continued ever since with his widow Rosemary continuing membership after his death in 2010.  For various reasons including work Captain Buchanan never re-started the restoration in earnest. However he did buy and store various items to use including a Titania blister, new winches, bilge pumps and pushpin. In 2017 our Secretary Richard James was in the area and visited Rosemary Buchanan and Deannie.  He found the boat well covered on a rusty trailer, completely stripped with the keels lying on the trailer. The Coventry Victor was still in place.  The boat was advertised ‘Free’ for restoration.  Three years later Rosemary’s health was declining and the boat and its covers had deteriorated.  In discussion with Rosemary’s daughter it was agree that Deannie should be scrapped. The AOA were able to reclaim the fittings and equipment which Captain Buchanan had stored in the ‘undercroft’ beneath the house.  Apart from the mice-eaten bunk cushions all of the gear had survived its 20+ years of incarceration and is now available to be put to use in other Atalantas.

Sadly the AOA have no pictures of A154 before discovery in 2017. If any members do have photographs, stories or information about Deannie we would love to publish them on the website.

Deannie peaking out from the undergrowth 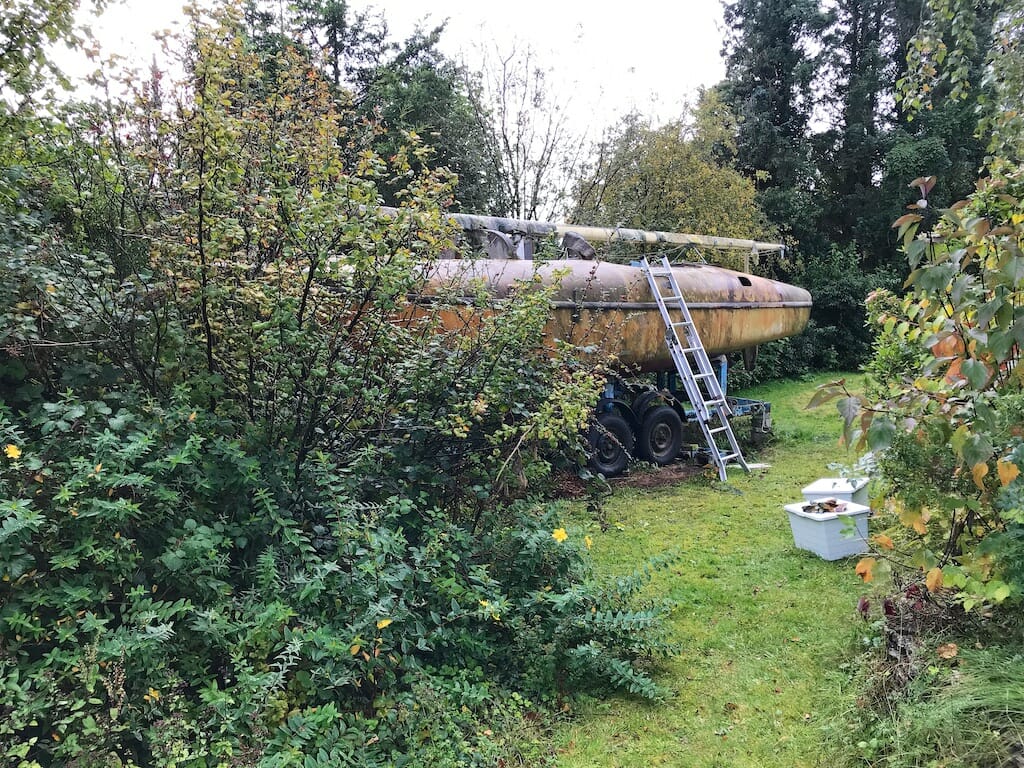 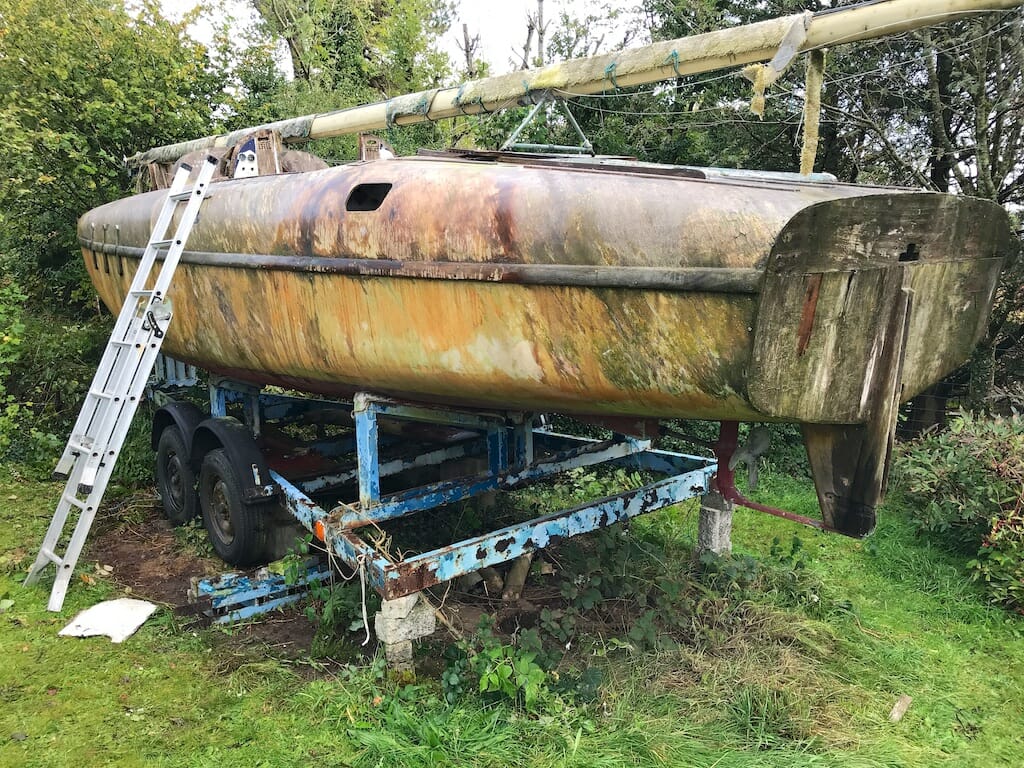 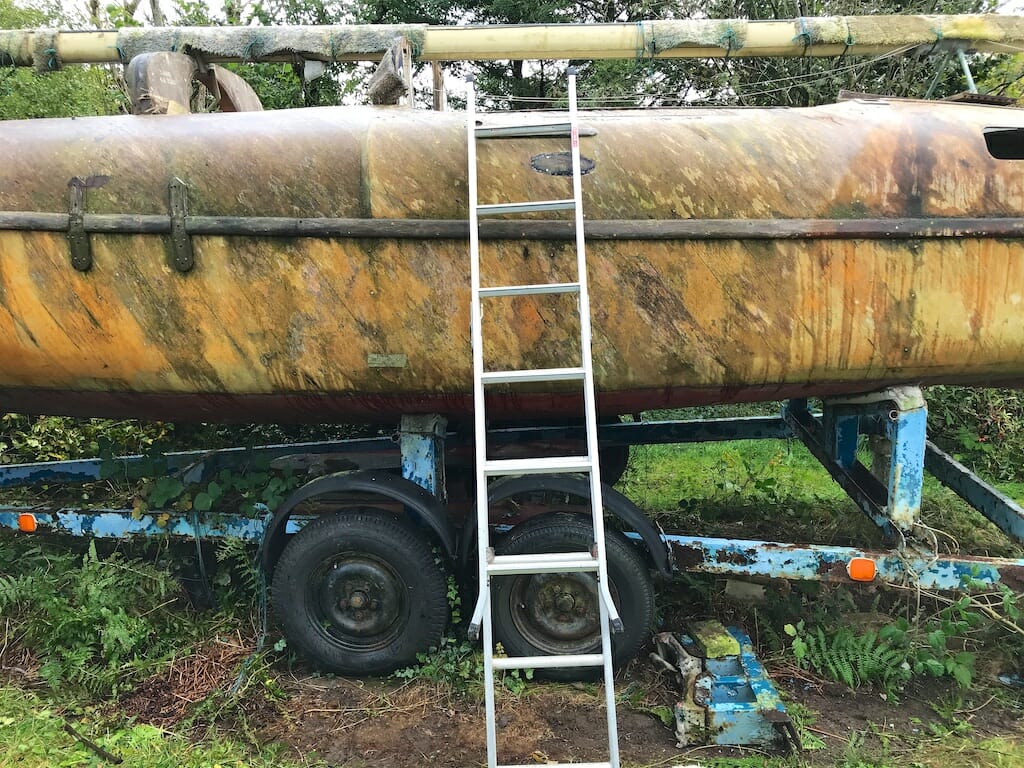 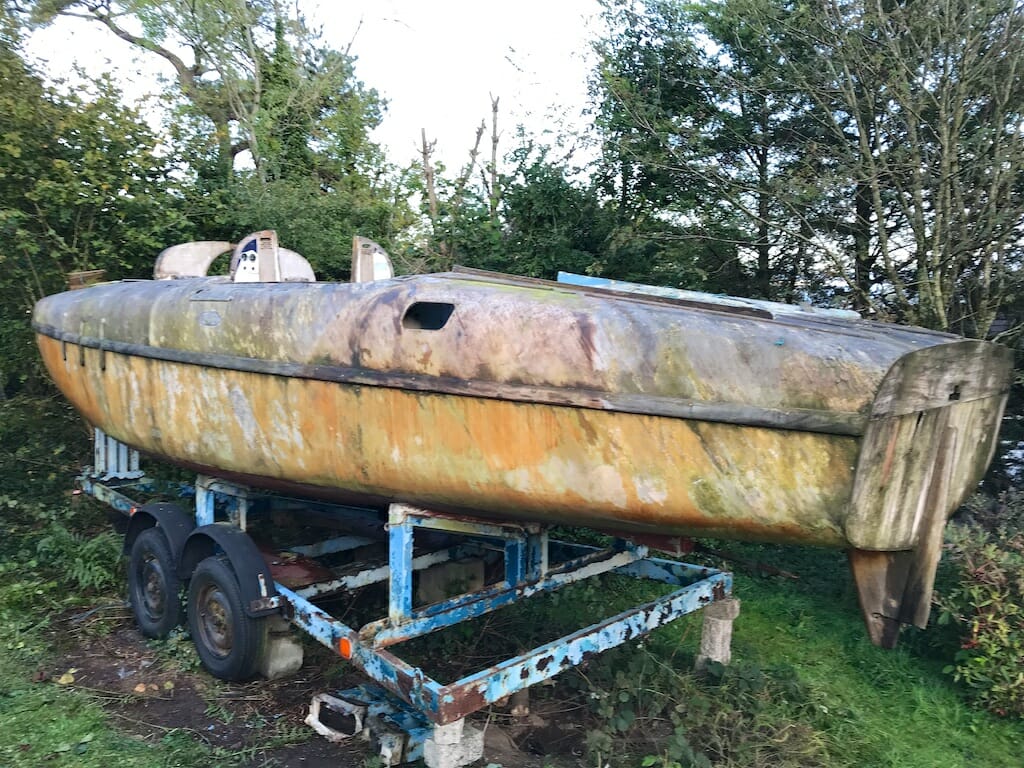 The heavy trailer was very rusty 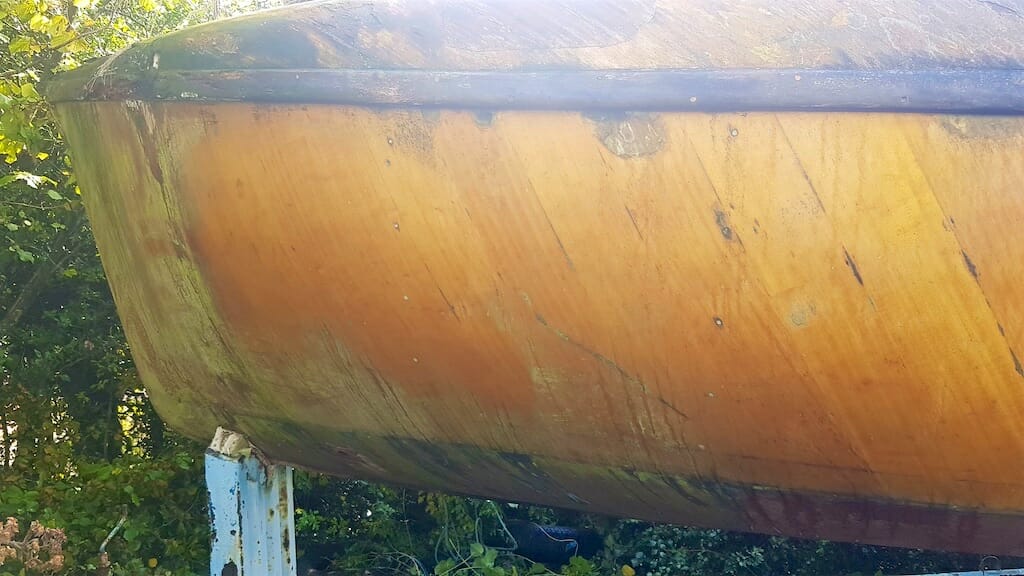 The varnish on the hull still visible where the covers had been. 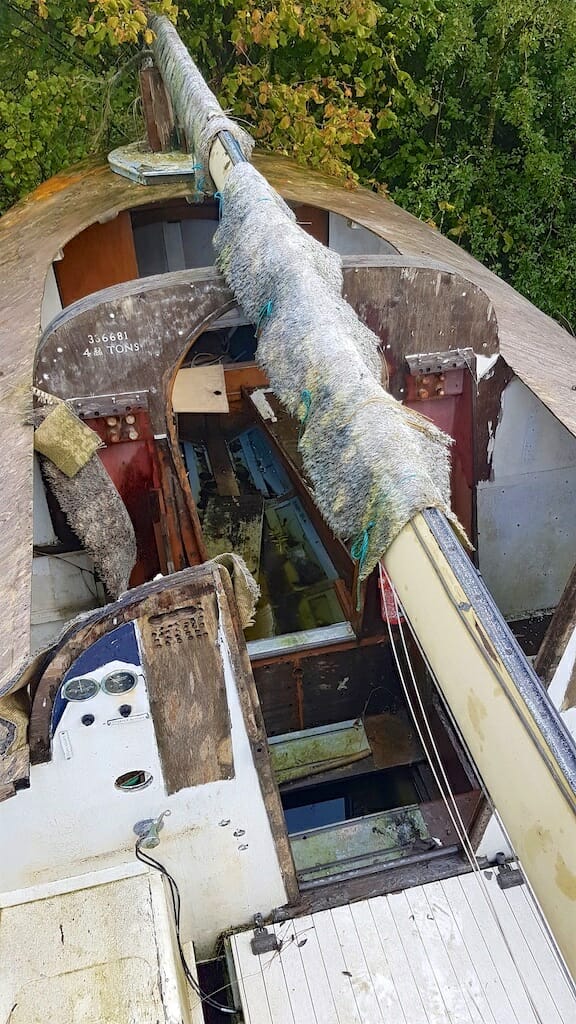 She had around 30cm water in her from the torn covers. The removed blister offers an interesting insight too construction. 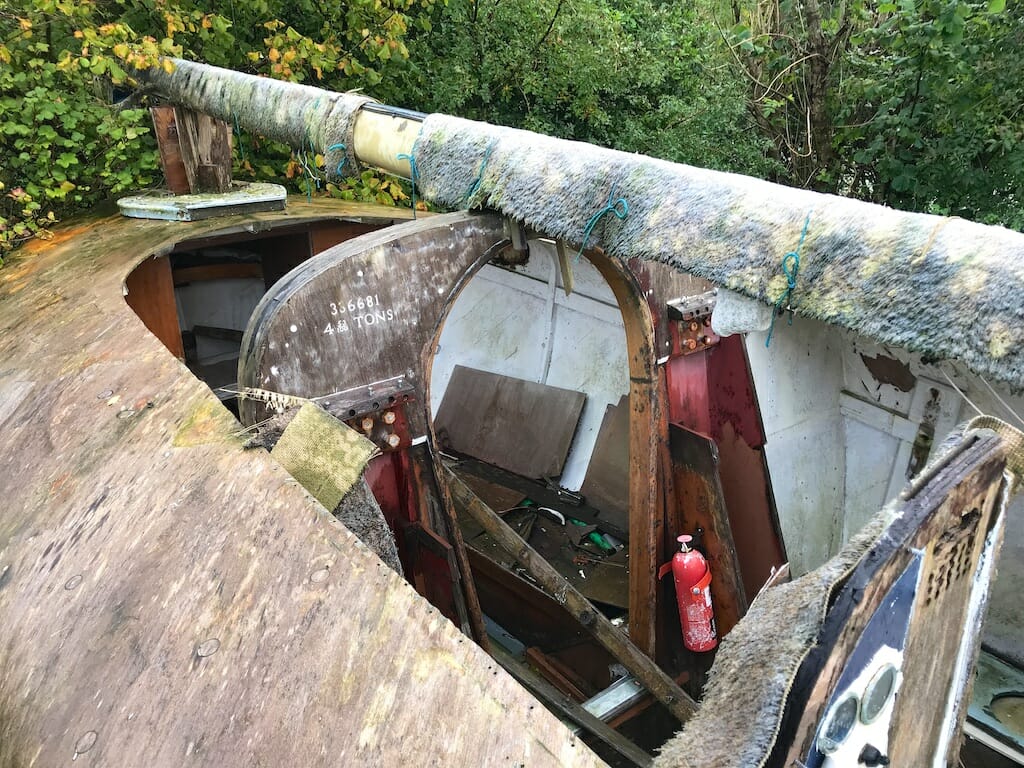 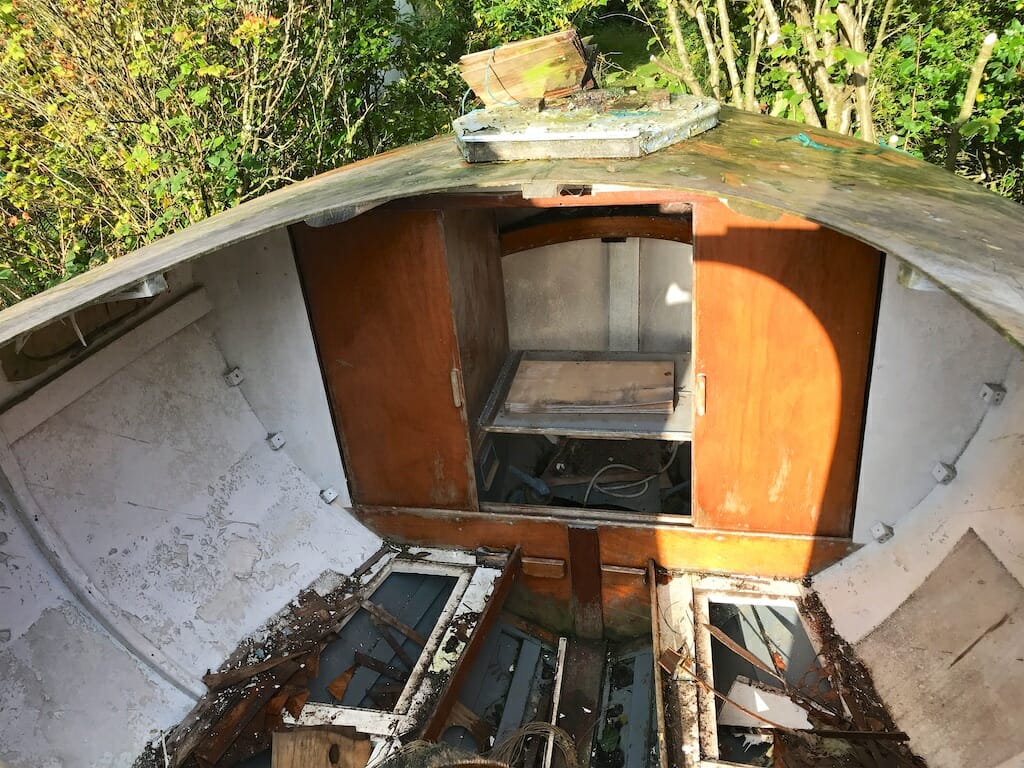 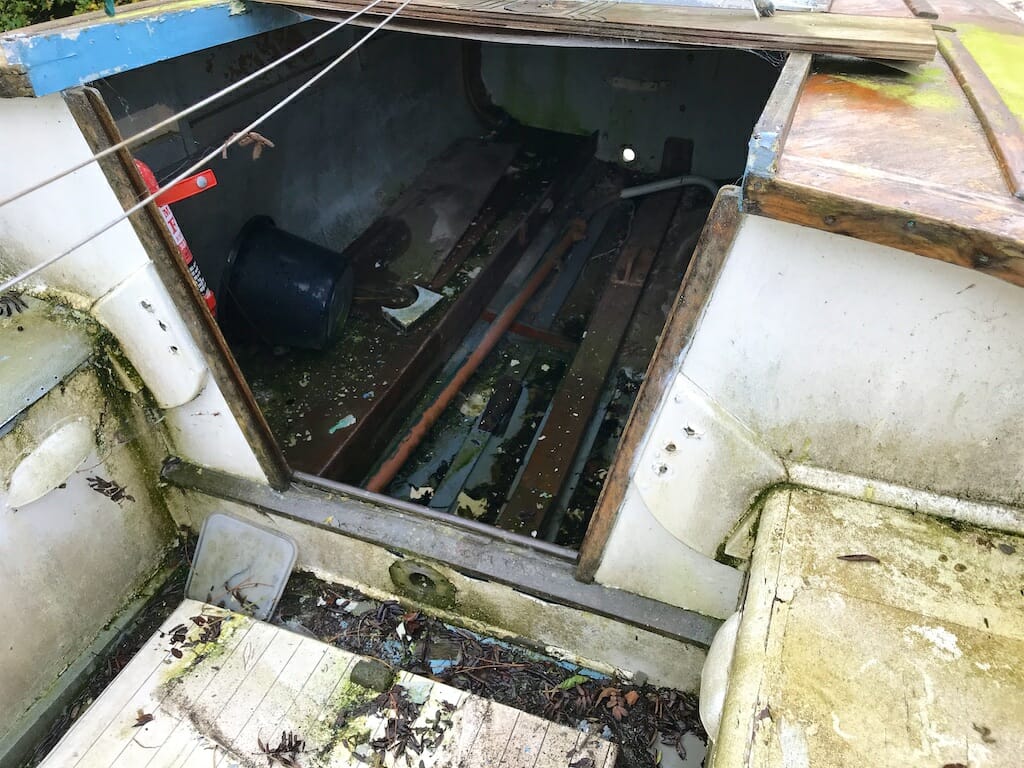 The stern cabin was relatively dry 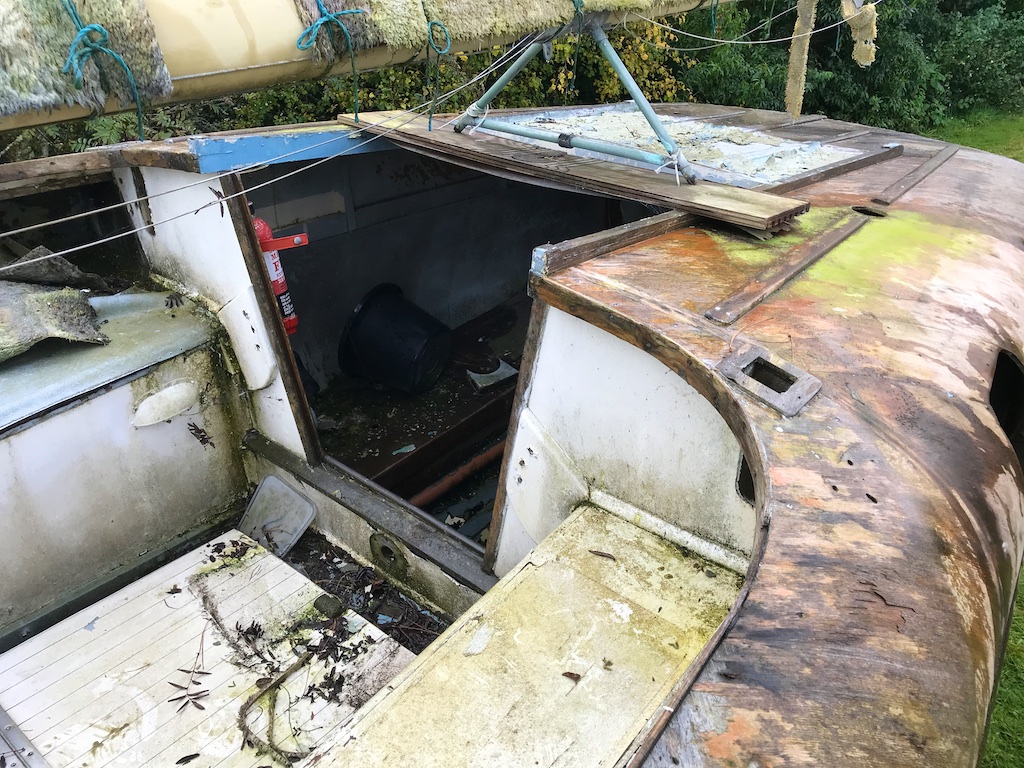 The engine hatches appeared intact. Until stood upon ….. 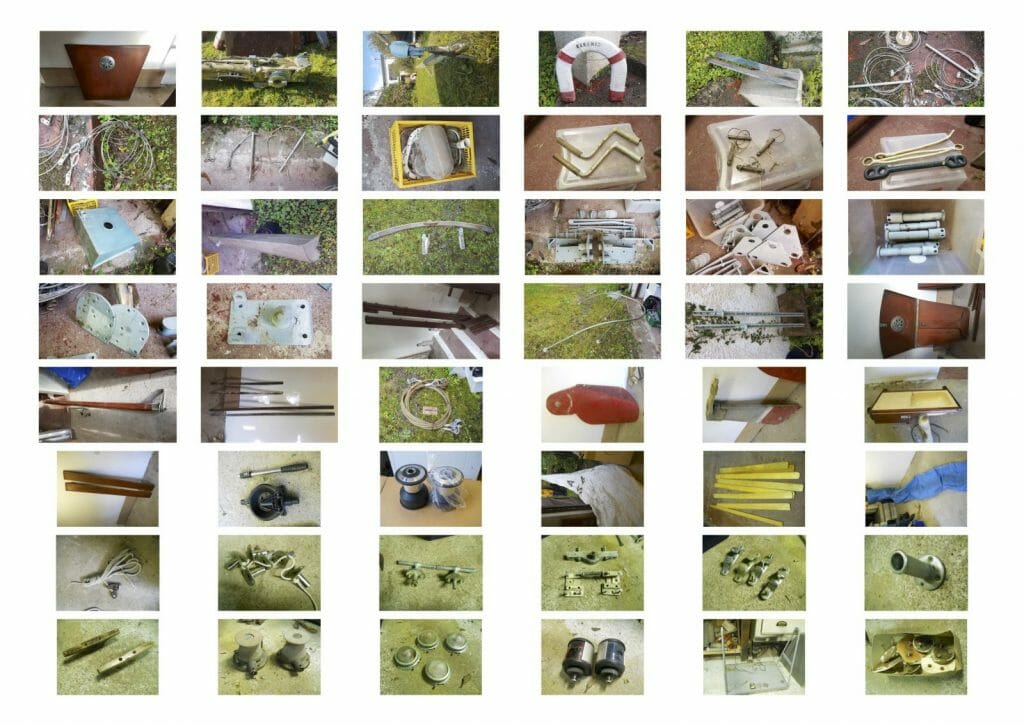 Collage- some of A154 parts rescued for other Atalantas