A90 – AWAY WITH THE TRAILER 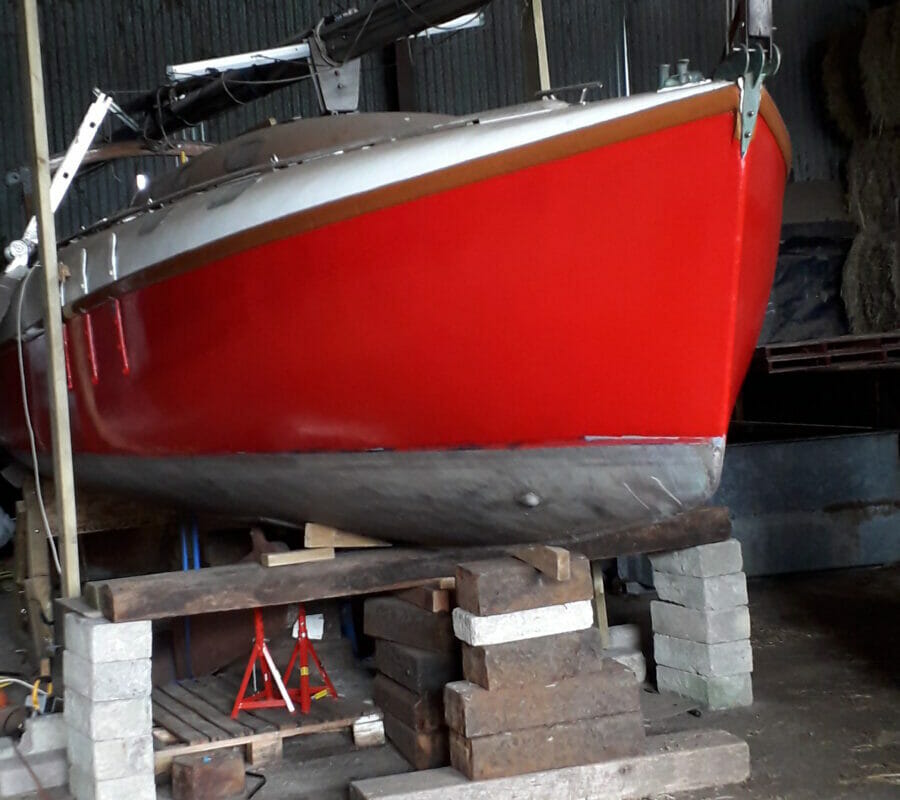 After changing A90’s  livery, time to go for the keels.

But removal of the trailer had to come first.

Travis Perkins first had to deliver some railway sleepers up from Newport , S.Wales,  to the barn. Someone told me that nowadays, they come from eastern europe !

Anyhow, my Bosch circular saw and then a good bow saw for the middle bit, soon cut the sleepers down to size.

Following good guidance from the AOA Forum and Colin Twyford’s PAPER ‘U’  I built a timber trestle for the stern.

My first and only experience of using a boat trailer was back in the ‘90s, when I was a Cornishman landbound in Milton Keynes – 70 miles ‘ish from any sea.

However, not daunted, but moving closer and closer to desiccation, I worked out where I was and found that not far away was a stretch of water called Grafham Water in Cambridgeshire.

I had sold my Cornish berthed Silhouette.

Now came the opportunity of sailing again and sailing a cruiser !

I bought ‘Kensa’ at the village of Lechlade, Gloucestershire.  A Silhouette Mk. II , trailer and an inboard Stuart Turner  1.5  hp.

My original S II   had the same engine  and I was well used to its idiosyncrasies – with grey hairs to prove it !

I drove off happily back to MK at the same time learning to cope with the bow of a yacht in my rear view mirror.

Although having had demonstrated to me  by the seller how to swing and start the engine, she would not under any circumstances cooperate.

But,  hey, it didn’t matter because  use of engines on Grafham Water was not allowed.

Anyhow, before I embarked on this diversion, we were talking about trailers, and getting an Atalanta off it.

The point I should have continued with, is that my  S II  trailer experience ensured I equipped myself with a trolley jack.

Since I sold Kensa in 1998, I had nothing to do with boat trailers, but now glad that over those years I did not sell the trolley jack.

Following Paper ‘F’,  the next move was to ‘rock’ the boat stern onto the stern trestle.

Before doing that it was necessary to have the midship and fwd. supports ready with breeze block ‘towers’ either side the boat and sleepers ready to slide onto the breeze blocks.

Right, so that was a ‘third’ of the boat off the  trailer !

The next stage was to jack up the bow, temporarily putting more stress onto the trestle,  then removing the trailer midships support and inserting the sleepers cross beam onto the breeze block tower.

Similarly, the same was done for the bow support, ensuring that this was positioned aft of the trailer bow support.

Once done we were ready to roll.

All this went too smoothly for my liking !

However, not quite with eyes closed, the trailer was hooked up to a friends van and pulled away with the wheels and mudguards just kissing the breeze block towers  – TRAILER AWAY !