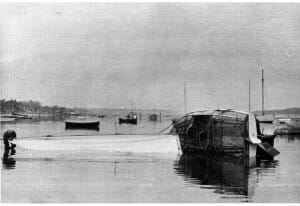 A1 undergoing a stability test at Fairey Marine’s Factory

The prototype Atalanta is shown in the photo above undergoing a heeling test. While we cannot tell what the righting moment is ( but it looks like the man at the end of the mast is pushing down!) we can see that the companionways and hatches are well clear of the water. She isn’t going to sink even with all the hatches open! However this is the prototype which was only 24 ft long, and had a number of differences to the production boats. We don’t have photos of the production boat being tested.

However Fairey Marine publicity material always stated that the Atalanta was fully self righting when the keels were right down, and self righting to 90 degrees with the keels fully raised. So it is safe to assume that the production boats were subjected to the same tests.

Factors which help the self righting ability are the rounded deck edges, and rounded cabin. Both of these features make the boat less stable when inverted, so it is more likely to self right. Both production Atalanta’s and Titania’s have higher topsides than the prototype. This will increase the buoyancy  high up, and help to keep the hatches and companionways clear of the water.

Be aware that any rig modification such as the addition of roller reefing, in mast furling, a taller mast,  radar transponder, can all significantly reduce the stability.