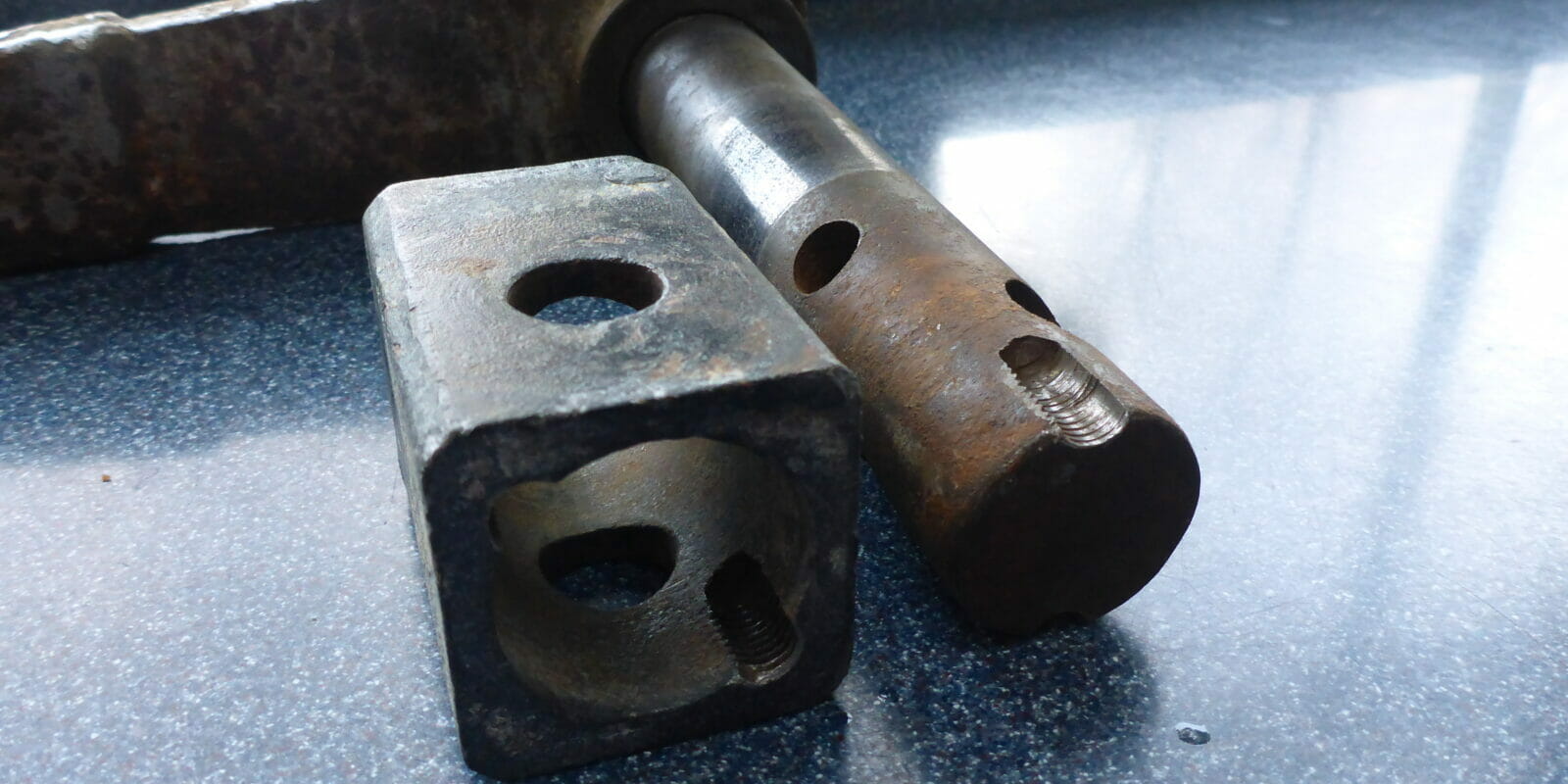 With the snow melting and the weather warmed up (relatively), work on Bluster has resumed with the stripping out of the steering mechanism.

The whipstaff bearing had a bit of play, but I wanted to take it out to inspect it. This was easier said than done because the square bushing on the cockpit side had been secured with two grub screws to stop it turning on the shaft. I broke two allen keys on these before deciding that they were rusted in place. Drilling them out was not easy as they were made of a hard steel. The six bolts holding the two ends of the bearing in place came out OK, but two sheared in the middle while screwing them out with no great force. They were either brass or bronze, but had obviously deteriorated badly.

The four sheaves guiding the steering cables were a bit worn due to earlier (original) mis-alignment, but this had been corrected sometime in the past. Other than that, they were in good condition and just needed cleaning.

The attachment of the steering cables to the stub tiller attached to the rudder head was of more concern. Two stainless steel plates, above and below the rudder, allowed the cables, with attached tensioning turnbuckles, to be attached with clevis pins at each end. The middles of the plates were attached to the rudder with washers, a machine screw and nut. The central holes in these plates were slightly worn, but had been made oversize, and the machine screw was slightly undersized for the hole in the rudder. This resulted in some play. However, disassembly showed that the plates had also badly worn the machine screw reducing its diameter still further and it sheared when unscrewing the bolt at the bottom (see photograph). If this had failed while sailing it would have resulted in complete loss of steering until the emergency tiller had been fitted. These parts were obviously not original, but it might be worth checking your own setup!

The rudder is showing signs of some corrosion, and the cheeks are a bit splayed but this did not appear to be too bad. Taking it off was again not easy due to the four stainless steel bolts through the upper pintle being corroded into the aluminium, but they succumbed to a socket with a long tommy bar, except for one with an odd head size. The ruder then came off. The lower pintle was bolted to the rudder skeg with another four stainless steel bolts which again were seized where they passed through the aluminium and required a steel drift and large lump hammer to remove them. Having got the pintle off it was inspected. The steel pintle was not too worn, but the aluminium mounting was very corroded, particularly on the inside next to the wood, and filler. It resembled the proverbial swiss cheese, particularly at the forward end, with some holes penetrating the full thickness of metal (see photograph).

I do not know why this piece was so much more corroded than the rest of the aluminium parts. Two zinc plates had been screwed to the skeg just above the lower pintle, possibly after taking it off before and seeing the state it was in? Had it been repaired previously, but with a different grade of aluminium? The stainless steel attachment bolts and the holes they were in drilled through the aluminium arms did not look original, so it may have been repaired previously. Any ideas? Also any recommendations you may have as to aluminium specialists to repair the lower pintle would be appreciated.