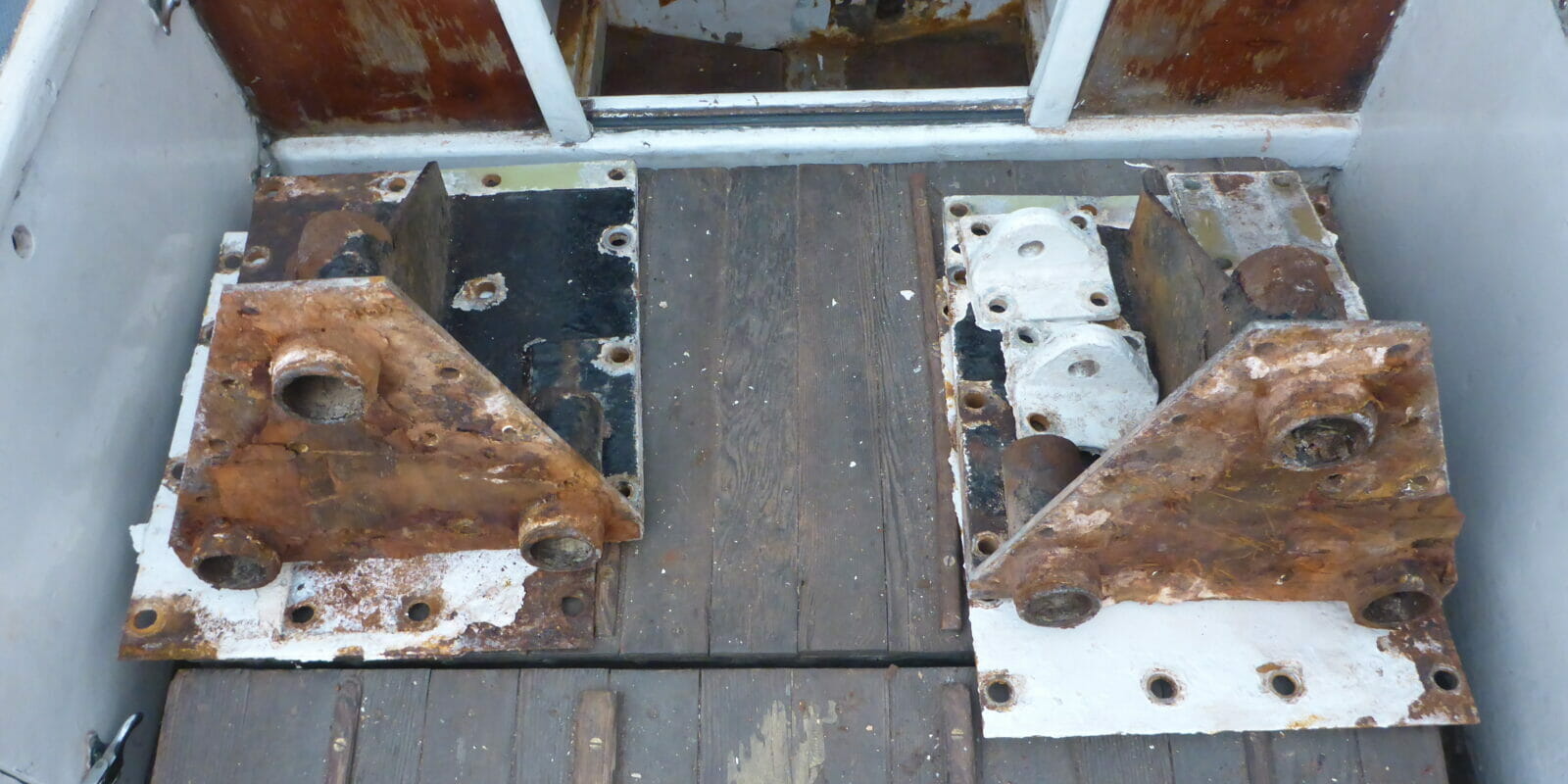 After much prevaricating, Bluster’s trailer was removed and the keels lowered to the ground. The supporting steelwork was then also removed for inspection.

Before removing the trailer, I cut off most of the keel band. This was rusty, but still had quire a bit of steel left. However, some of the securing screws were broken and it was hanging off in the middle. It had obviously been replaced before and the wood beneath it was not in good condition and filled with cut-off old screws. It was held on with bronze screws which came out easily, but were seized where they passed through the steel. To remove them, the keel band was cut between each screw and the sections unscrewed.

Jacking Bluster up off her trailer went smoothly, with the aid of 24 concrete blocks, four tall axel stands, a bottle jack, and two 3 metre lengths of channel section steel beams. The trailer cleared the beams by a millimetre!

To get Bluster to the correct height for removing the keels, the jacking up process was reversed. The procedure for keel removal outlined in Technical Paper F on the AOA website was followed, and worked like a dream. It only required a ratchet strap and a couple of (retired) climbing slings and karabiners.

The  keel bolts came out fairly easily (with drift and lump hammer), followed by the pressure plates. These were in good condition, having been replaced relatively recently. The keel bolts were well greased but corroded where exposed in the keelbox.

Having got the keels out, the lifting mechanisms were unbolted. It appeared that this keel service was just in time, as the stirrup steelwork was very corroded, especially just above the keels, and one leg was almost rusted through.

A start was then made on removing all the bolts holding in the keel support structures. About half of the bolts through the keelboxes turned when trying to remove the nuts and had to be cut off and then punched out. However, the 1/2 inch bolts through the main bulkhead gave more trouble. The upper bolts and nuts could be unscrewed (with some force), but the lower bolts and nuts were very corroded and either did not fit a spanner or sheared off due to corrosion of the bolt within the bulkhead. However, with the use of a drill and cold chisel to remove corroded nuts, a punch, pipe wrench and trusty lump hammer they eventually all came out.

The backing plates on the aft side of the bulkhead were rusty, but only badly corroded on the lower outboard corners where bilge water collects when heeled. These need repair or replacement.

The bulkhead itself suffered some minor damage where swelled rusty bolts had been driven out, but can be repaired with some graving pieces and epoxy glue.

Having removed all the securing bolts, it only remained to remove the steelwork. This was easier said than done as, although free on the main bulkhead, the two pieces were securely glued to the keelbox sides. When they eventually came free they brought with them several chunks of plywood laminations. These inboard sections of the keelboxes will need a lot of repair, or possibly replacement by scarfing in new plywood. Delamination was probably caused by all the rusty ironwork and bolts.

Elsewhere, the keelboxes did not appear to be in too bad condition. There was some wear close to the pivot bolts where the keels had eroded the side of the box when being raised or lowered, probably partially due to the worn keel bolts, and some splintering of the top laminate elsewhere in the keelboxes, but nothing that cannot be easily repaired.

Next to be investigated are the keel stops at the aft end of the keel boxes. This is an area that is known to be the source of considerable water ingress when heeled, and I suspect that all is not as it should be. The first job is to look at the plans and see what should be there!