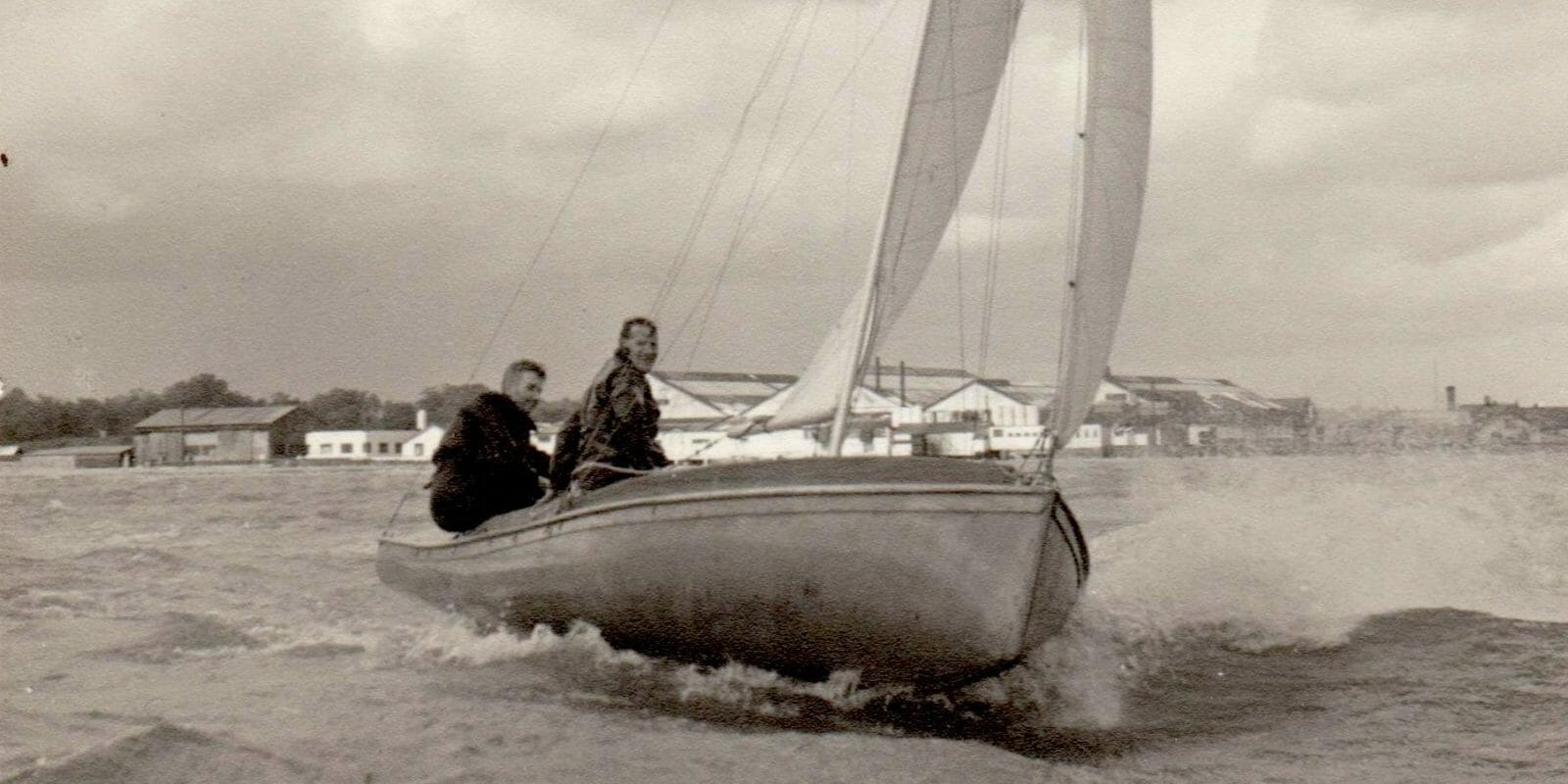 An ardent admirer of the Firefly was Alan Vines, a senior executive in the Fairey Aviation Company and a keen and almost fanatical sailor. He was very impressed with the seaworthiness of this light displacement boat as well as its racing performance.

Alan was a devoted family man with a wife and three daughters. On their summer holidays at Sea View in the Isle of Wight, he always sailed across the Solent from Hamble in a Firefly to join the family, all of whom also wanted to sail. In an early ‘History of the Atalanta’ he tells us that as the children grew bigger they had to have a larger boat than a Firefly. His ideal solution was something similar, though bigger with ballasted keels to keep the boat right side up, with minimum draft and all very light. The general specification which evolved was 22ft overall, 9in of draught with keels up, hull of moulded plywood 3/16″ thick, deck of 1/8″ ply and ballast in the form of twin retractable loaded dagger plates.

Fairey Marine built a 22ft boat to this specification and the ingenious way in which it was done, by splitting an Uffa Fox designed Swordfish dinghy longitudinally and widening and lengthening it, is fully described and illustrated in an article published in Yachting World in December 1952 (see below).

The hull was divided into three parts separated by two bulkheads. The centre part was an open cockpit and the decked fore and aft parts formed cabins equipped with sleeping berths. A tent over the cockpit provided additional cabin space at night. Twin loaded dagger plates of 150lb each could be lowered in casings located on either side at the forward end of the cockpit. The boat had a lifting rudder for beaching and a vertical tiller mounted just forward of the after bulkhead. The mast was stepped on deck, to avoid obstructing the forward cabin, and the sail area was modest and about the same as that of an International 14ft dinghy.

When the boat was launched Alan named her Sujanwiz after his three daughters, Susan, Jane and Wiz. He sailed her successfully for several summers and found her performance to windward to be quite acceptable while off the wind she was quite brilliant. Moreover, she proved to be a good sea boat and equal to, or better than, many of the 22ft cruisers of the day. In the Island race of 1952 when conditions were quite severe with strong winds, Alan Vines finished happily and in better time than some much larger boats. 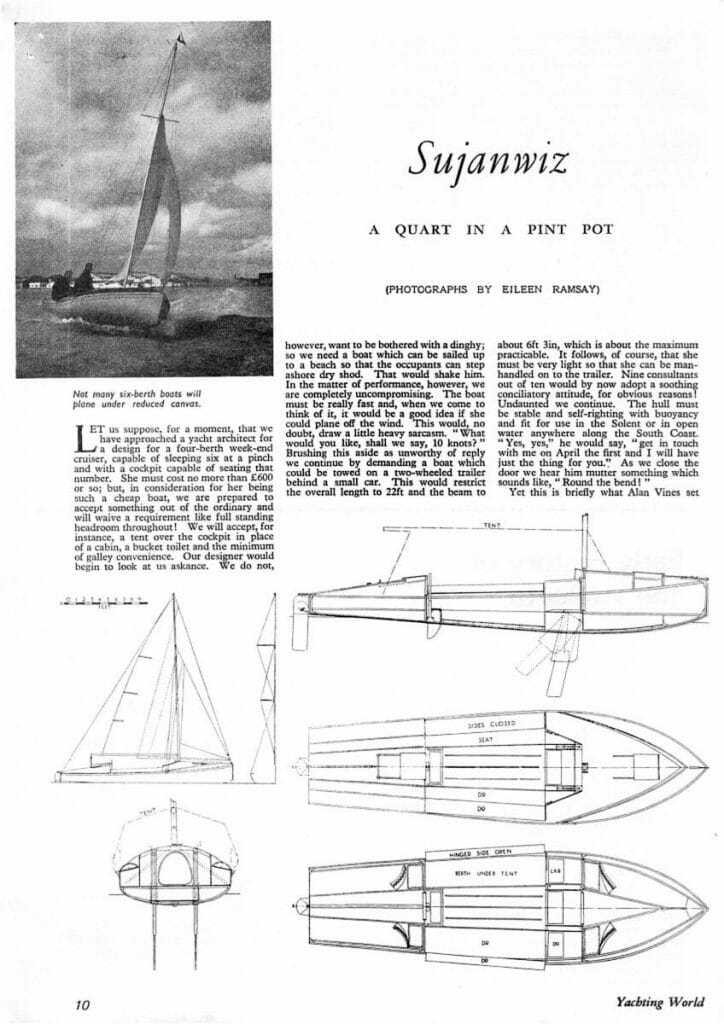 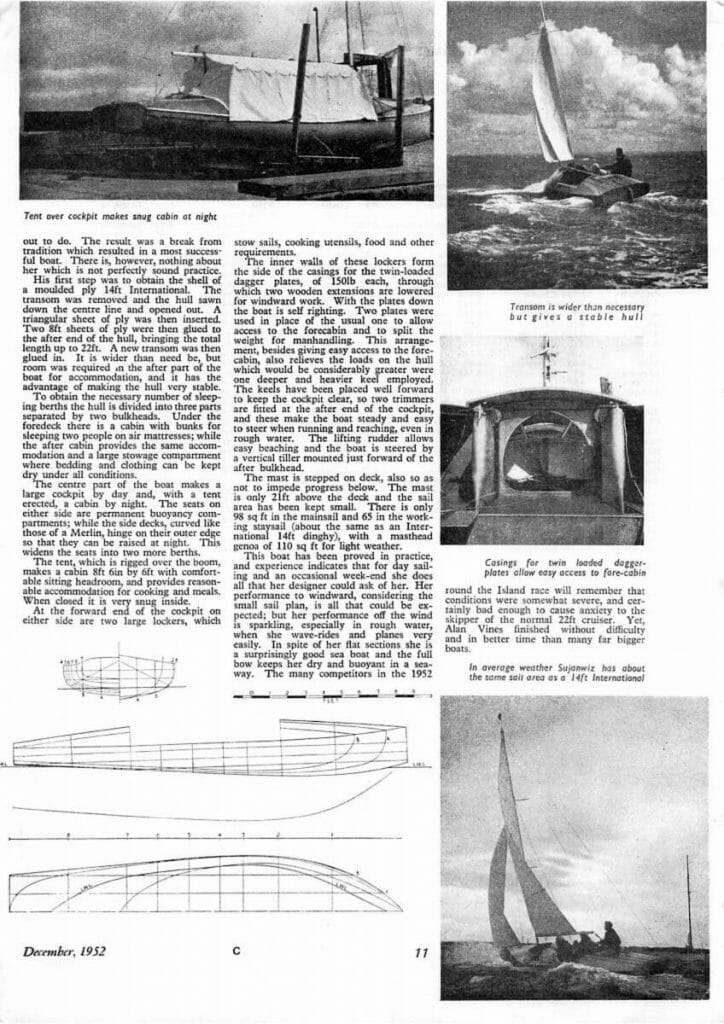 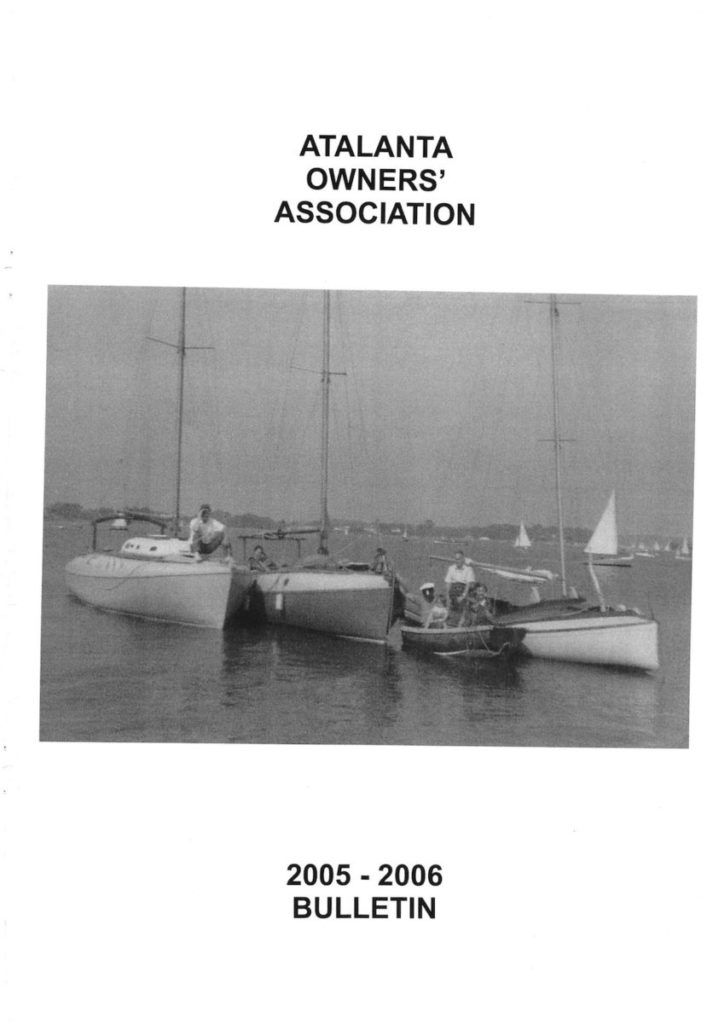 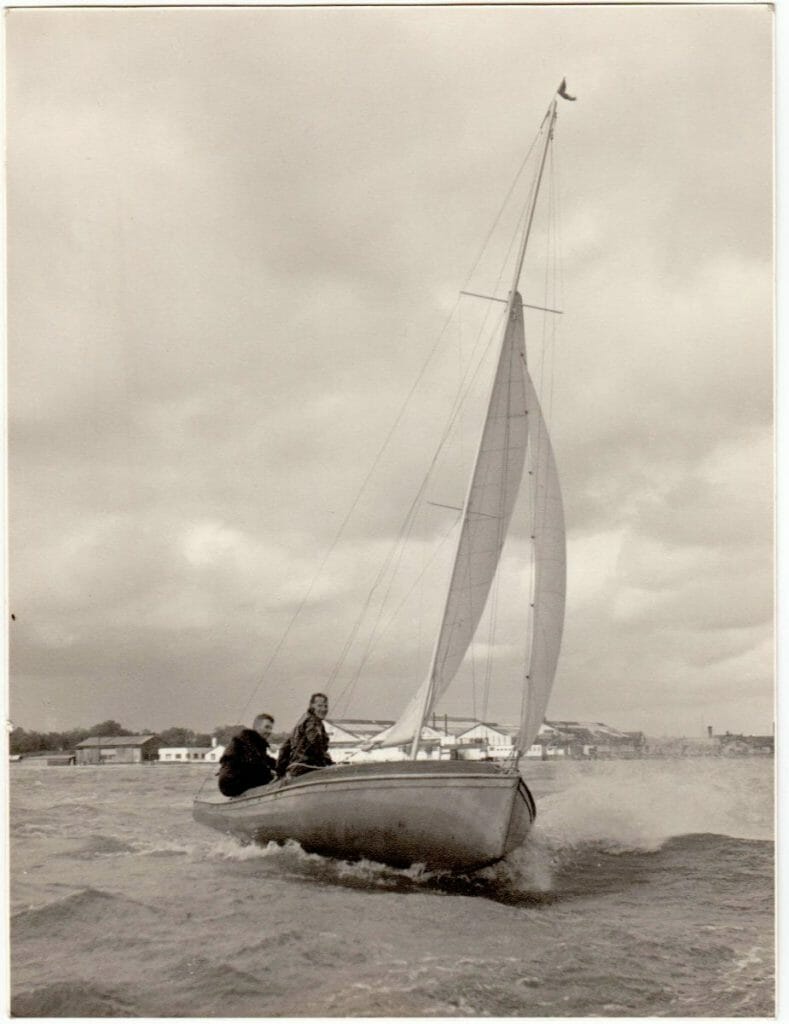 Sujanwiz Sujanwiz helmed by Alan Vines sailing on the Hamble with his brother in law Jimmy Mumford crewing. Fairey Marine factory in the background. 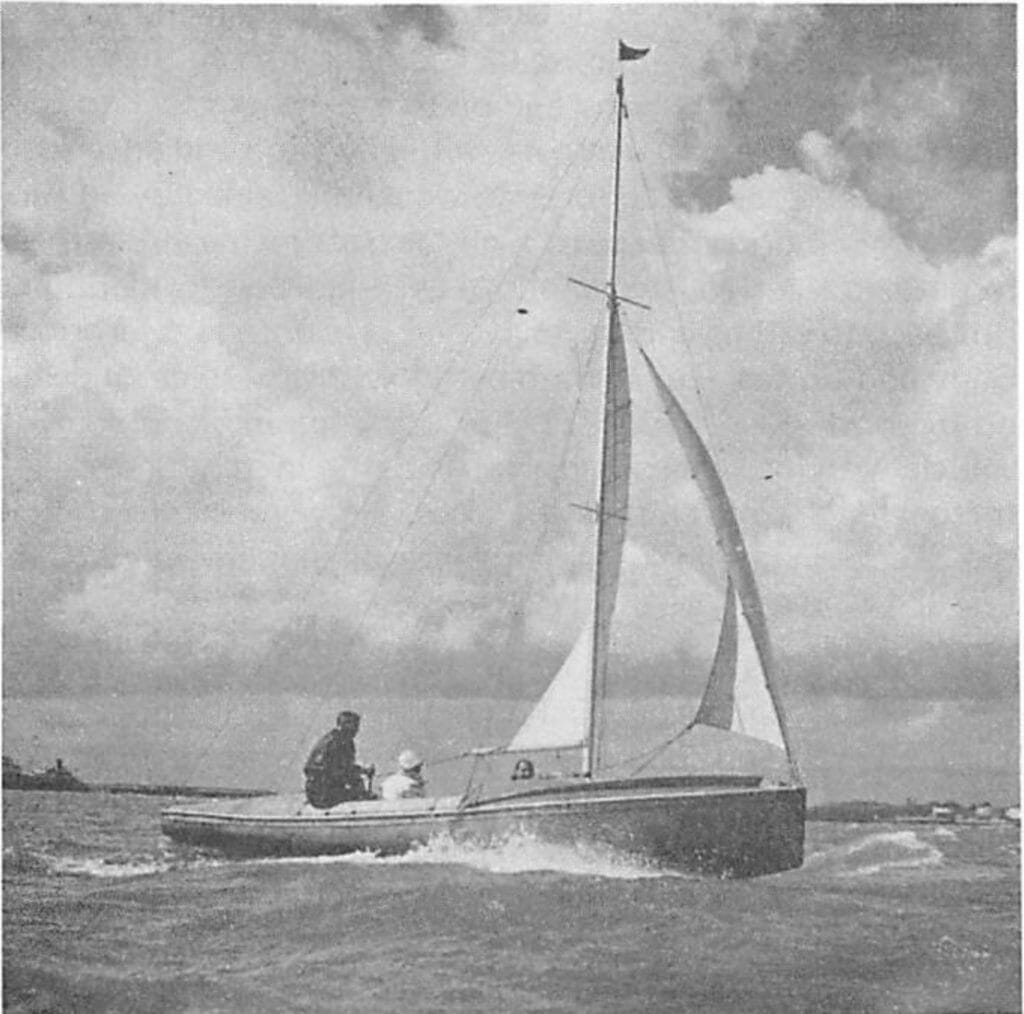 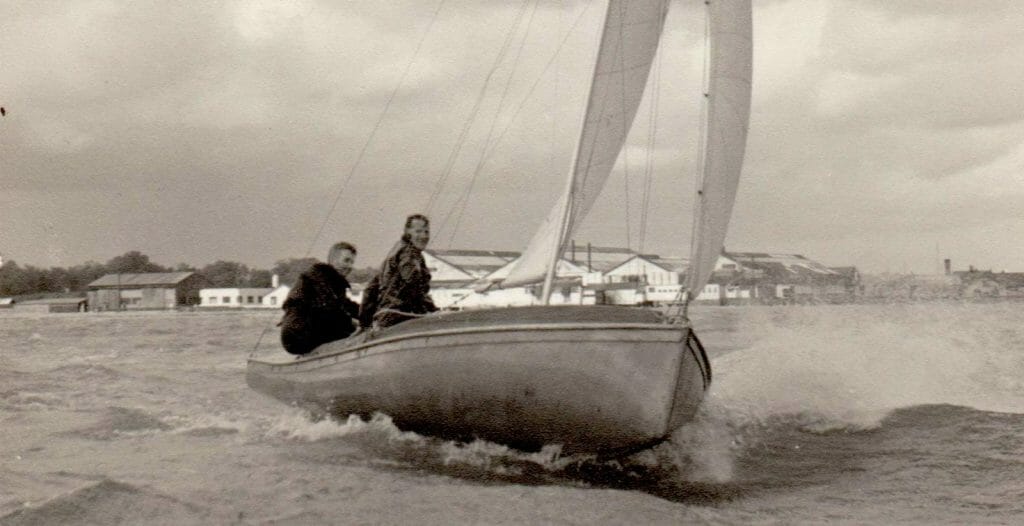 Sujanwiz Sujanwiz at speed on the Hamble, Fairey factory in the background. 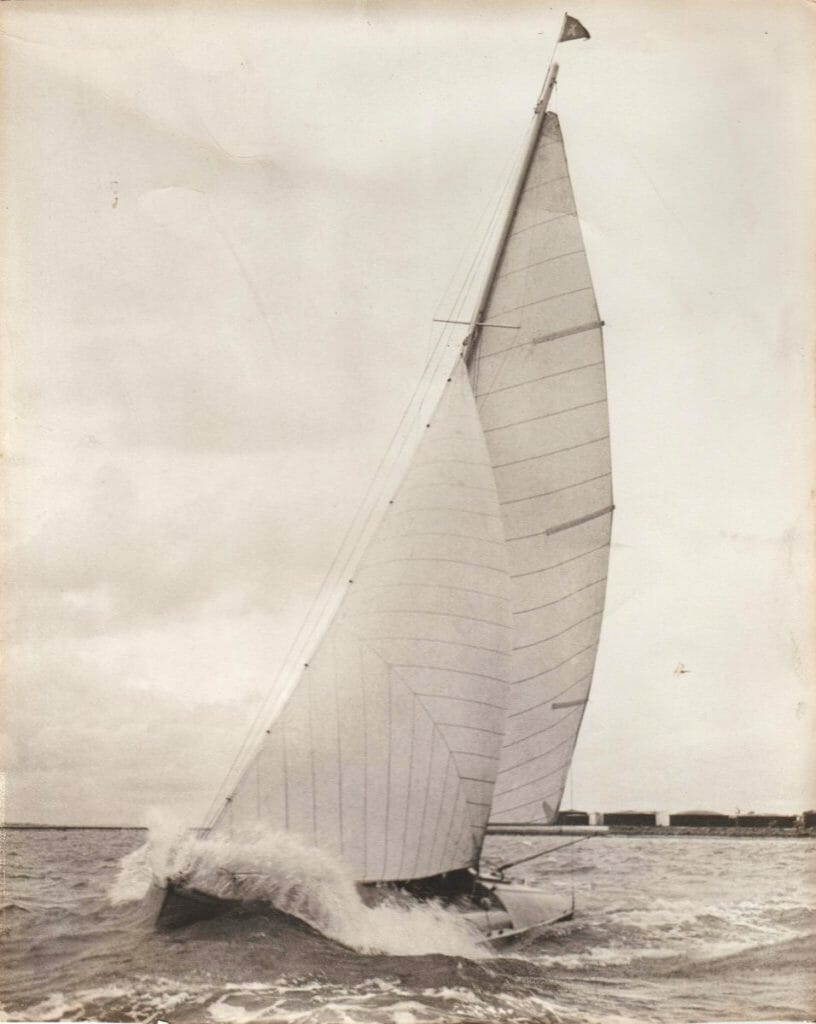 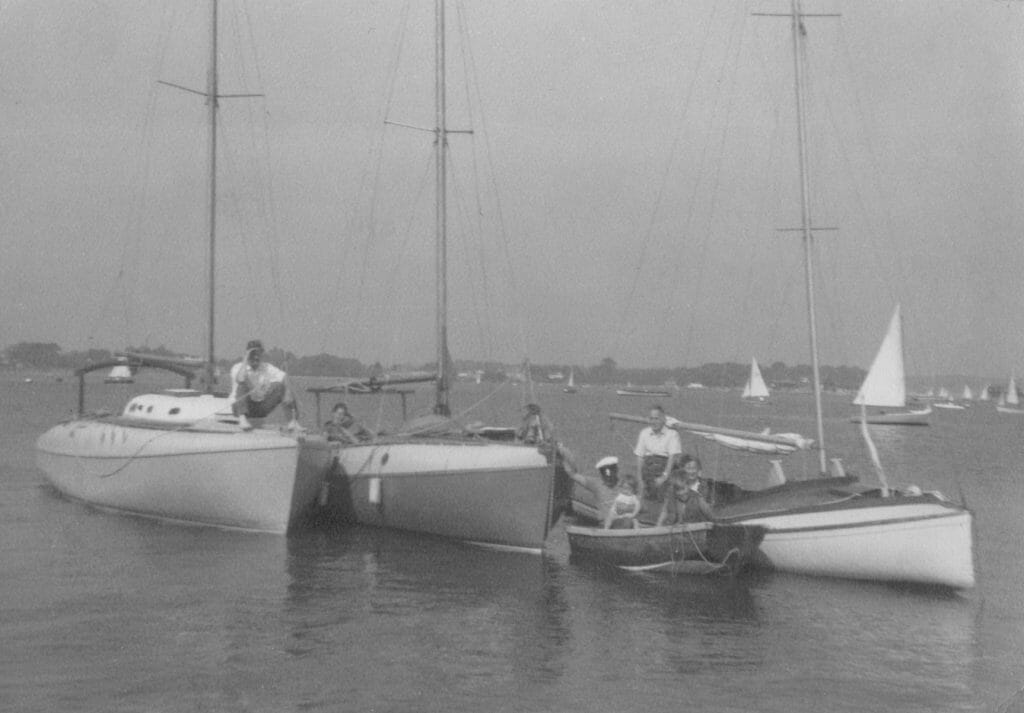