A124 Helene gets her old boom back with slab reefing

Helene’s previous owner had invested in the hope of a return in silverware. Helene (3/4 rig, wooden mast) had been set up with new sails and gear for racing. This included leading main halyard and topping lift aft to the cockpit. A significant downside in this approach for me was the aesthetic blight of an aluminium boom, offset by the practical internal slab-reefing lines.

I set about converting the original wooden boom for slab reefing. This posed a few challenges:

Consulting drawing A24211 it was clear that the hollow boom had some solid sections. Specifically, the ends, where the mainsheet claw sits and 3′ abaft the mast.

For the reefing lines I decided the size of sail did not warrant blocks and adopted a reefing comb. Raising the boom with the topping lift first means little resistance to pulling in the reef.  I epoxied 1/2 a sheave in each hollow of the comb to minimise friction. The fastenings, two of which are in the solid section designed for the mainsheet, pass right through the comb and boom with a backing strip on the other side. The two reefing lines (number 1 redeployed for the third reef) are led along the boom to a double block fixed at the forward end, returning to cleats over the hatch. The block is fastened to the roller reefing fitting flange. 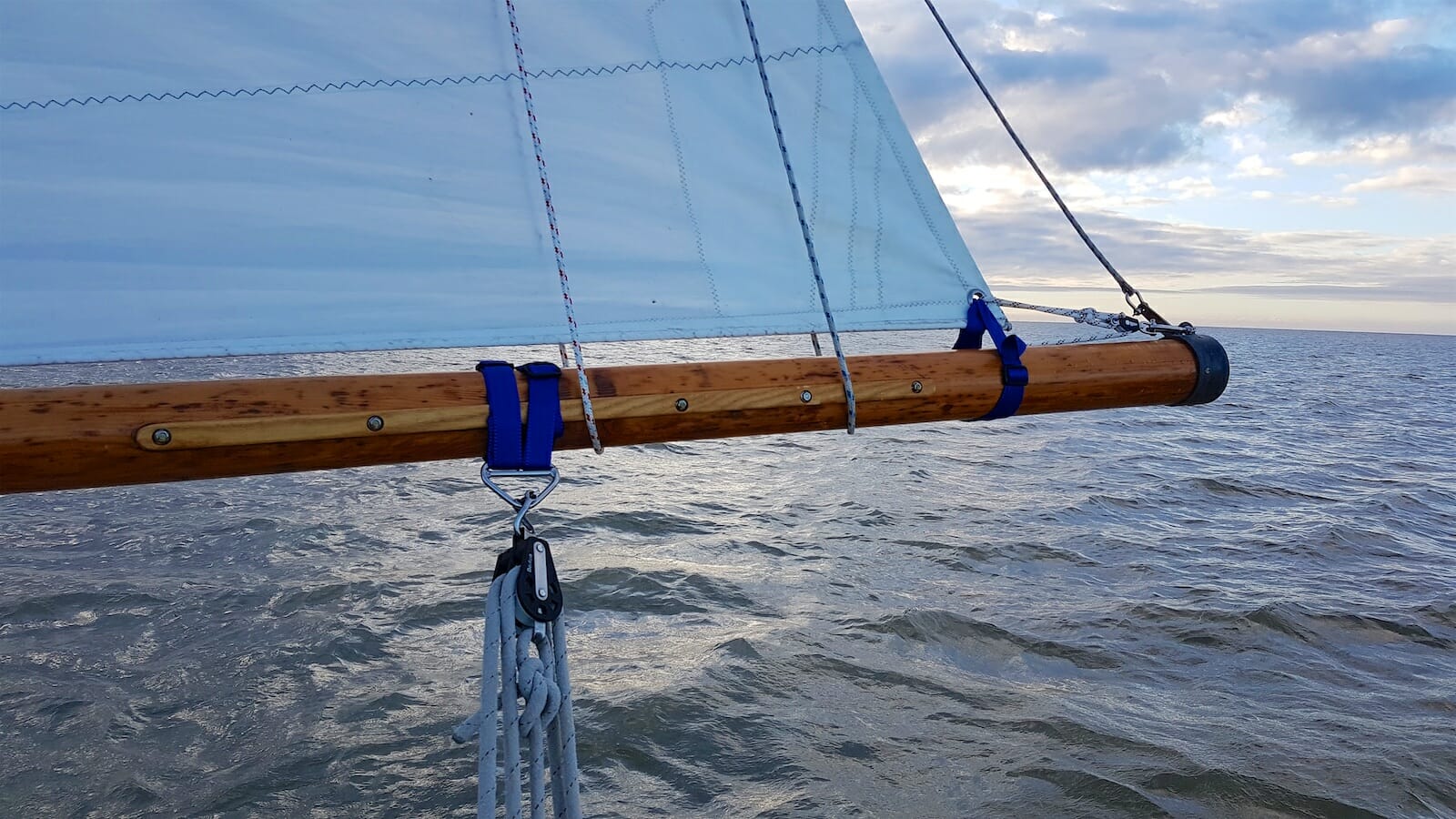 Loose footed main! B-blocks were fitted each side of the boom rather than aluminium/nylon blocks. The webbing straps took a while to master.

Solving the mainsheet attachment was more mentally taxing.  There were many designs none of which felt satisfactory as they relied on potentially boom-splitting fastenings. The answer came when I decided to adopt a loose foot to the main. Removing the bolt-rope from the boom enabled wrap around webbing attachent of the mainsheet. This has no fastenings utilising slots cut in the reefing comb for positioning and simple buckles for adjustment. The loose foot also adds the potential for greater sail-shape control.

The outhaul line was then led down the now vacant boom groove between blocks fixed at each end. The sail clew is held to the boom with a webbing loop.

The bronze boom end and reefing ratchet is, in my mind, one of the bits of engineering that helps defines the Atalanta and her Fairey background.  I replaced the handles with a wooden spacer and locked the boom from turning using a bolt against the old reefing pawl. The only destructive modification apart from a few holes was removal of the top of the flange to avoid chafing the sail foot. 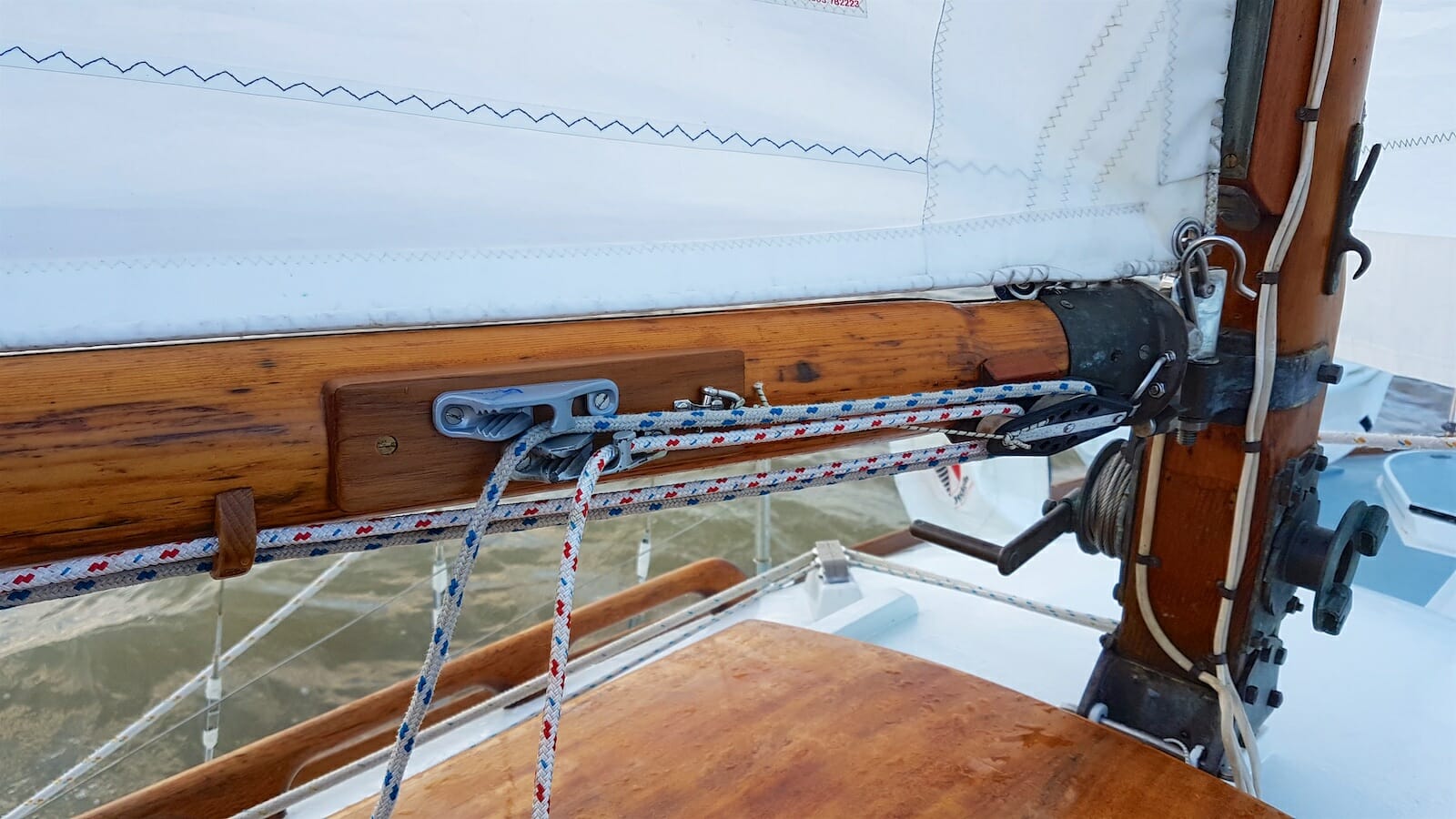 Reefing lines travel to the forward end of the boom and then return for cleating on the boom. Note the main halyard and topping lift led aft – everything can be done from the cockpit. 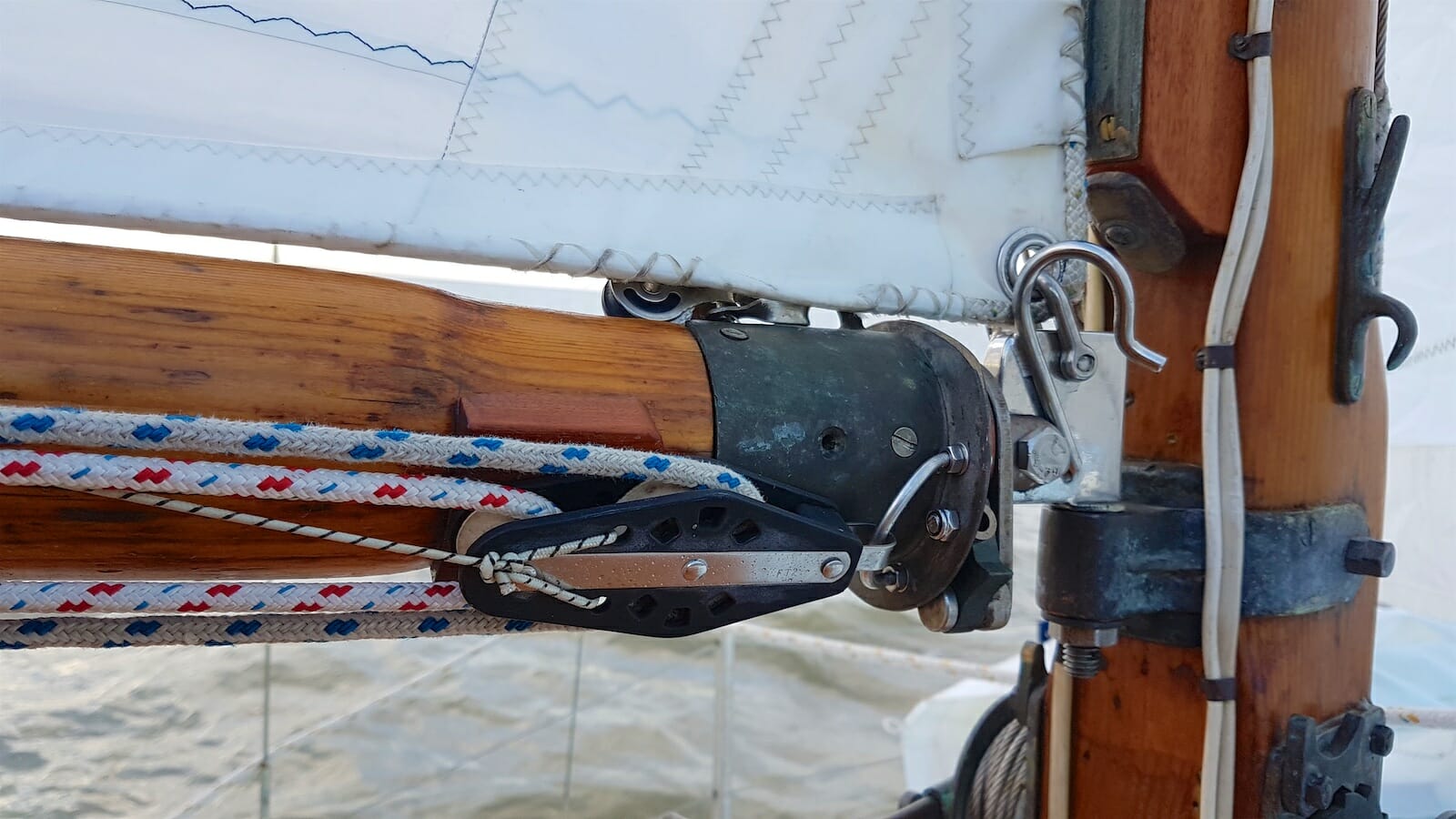 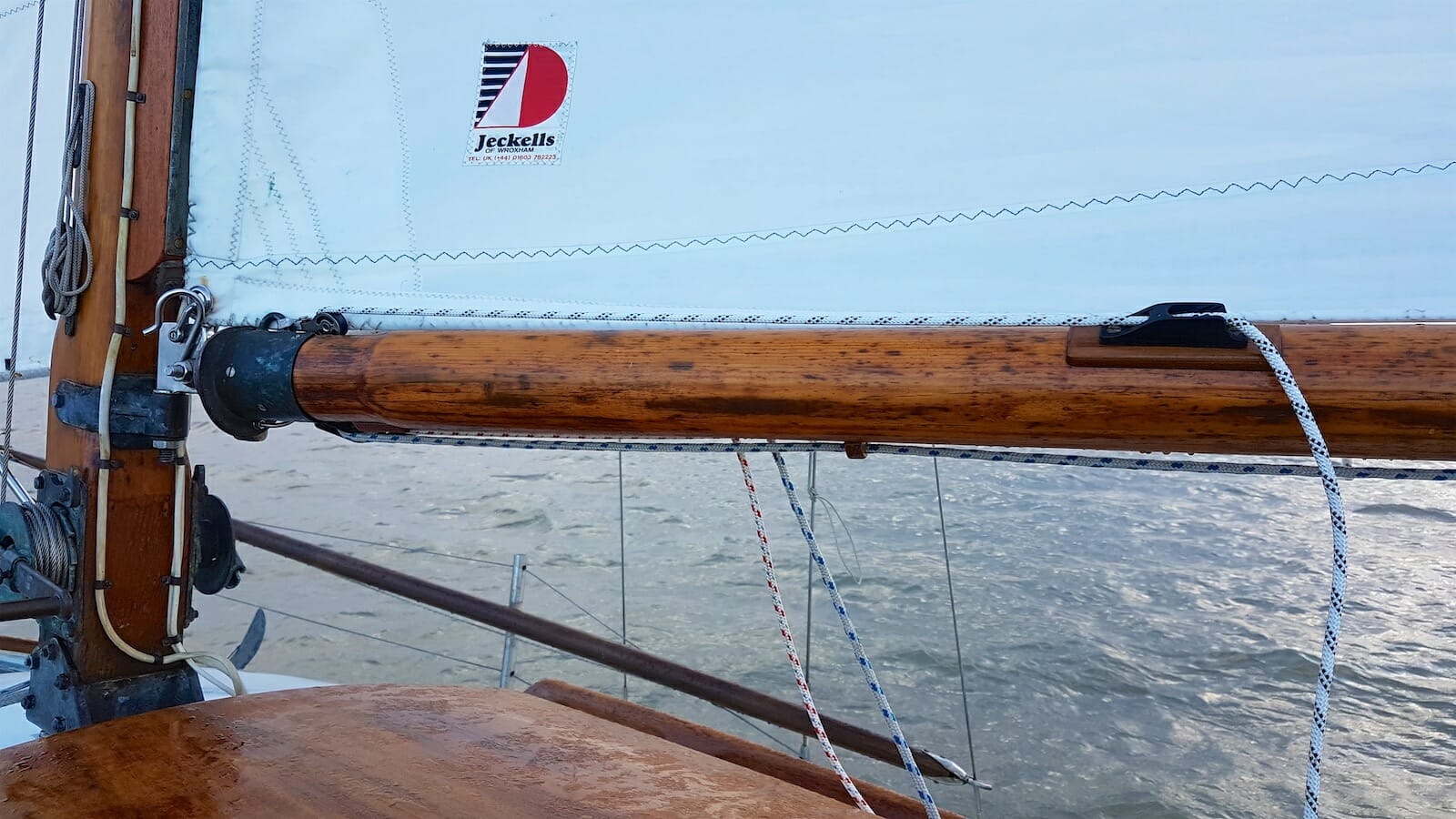 The reefing handle was removed from the old boom in a way that it can be replaced if required. The boom fitting was then matched to a new gooseneck. This clear is for the outhaul.

With resolution of the clew management my focus turned to the tack. A revised gooseneck with horns enabled rapid setting of the luff. Except for the 15″ gap from boom to start of track which necessitates removing just the right amount of slides from the track. I asked around – “why is there a gap?” I could find no real reason suspecting it might be to allow the boom to fold against the mast. So I filled in the gap and extended the track to within 2″ of the gooseneck. 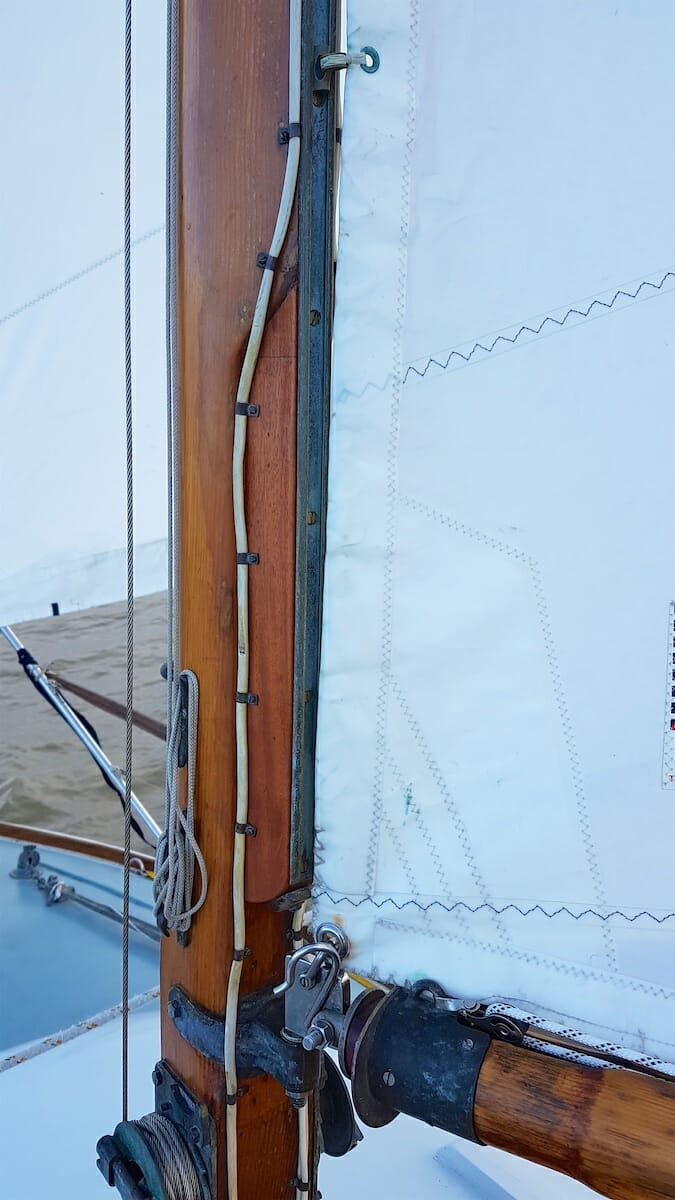 The mast track was extended to just above the book by fitting an infill. This allows the sail to stow much more neatly. 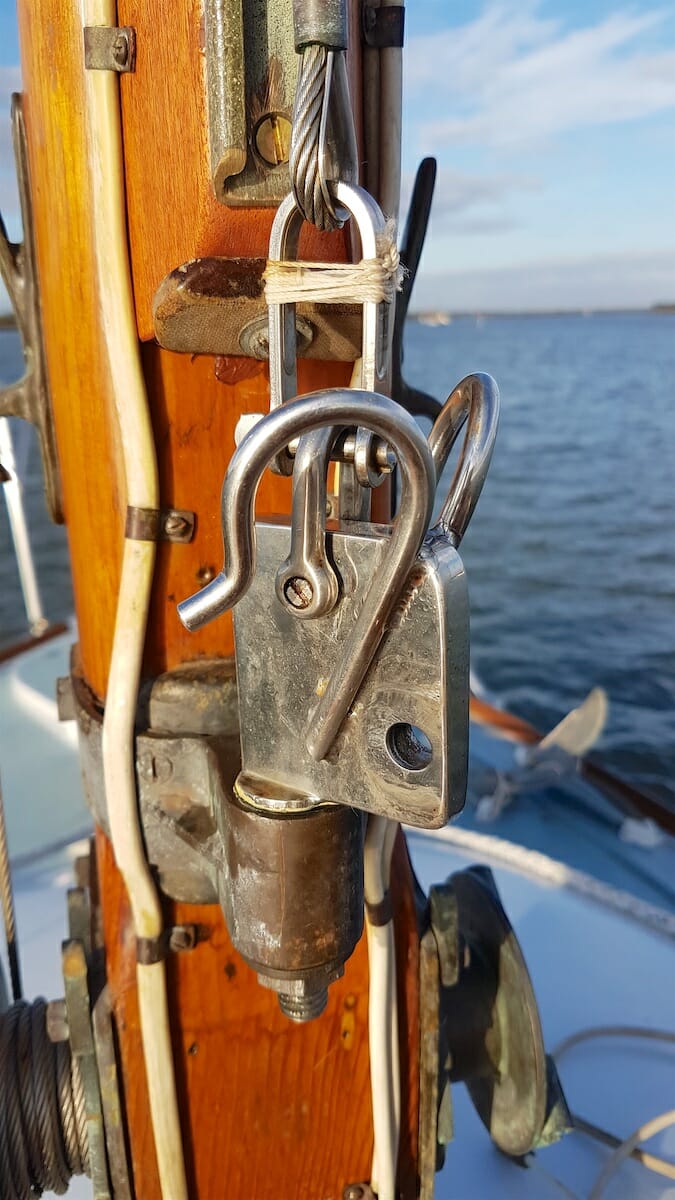 The gooseneck fitting. A stainless bolt, some plate and some stainless rod. Plus someone who can weld.

It works. What a difference. Top up the topping lift; drop the luff a little, hook on the reef cringle and re-tension; haul in the reefing line and cleat; release topping lift. It looks good too. Ignoring aesthetics, perhaps the biggest improvements have come from extending the mainsail track and going loose footed.