Reply To: REMOVING THE TRAILER

Wise words in Mike’s article, based on lots of experience with A1, T10 and A31/4 and other people’s Atalantas.
I remain in awe of those with the confidence and skill to lift Atalanta’s with bottlejacks, wedges and barrels. This technique has been used for decades and is therefore well proven.  Chris Green is using chain hoists in a scaffold frame for A169 Elle.

I am a little risk averse and I adopted a slightly different approach for A124. It did require a little more investment of money and time but causes me a lot less stress.
It is based on the principle of a strong crossbeam (I have used RSJ and more recently 8”x4” construction grade timber) running in triangulated frames and supported by a ‘Hi-Lift’ hack at each end. Hopefully the pictures below give you the idea.

Mark 1 of this arrangement (used for A124 and a variety of other boats) involved two jacks, dropping the nose of the trailer on the jockey wheel and positioning a trestle under the stern of the boat before raising the front of the trailer again with the jockey wheel and then rigging the beam/supports/jacks under the boat as close to the front of the keel as possible (might need that bottle jack to create enough room between trailer and keel). The bow is then jacked high enough to withdraw the trailer (the beam must be long enough to allow this.

Mark 2 with Four Jacks replaced the aft trestle with another beam / support / jack arrangement. With a jack at each corner is then simply a matter of raising each end a little at a time, keeping the boat pretty much level as high as your supports will allow.

Note in the last frame the trestles into which the beams are lowered for working under the boat so that you are not depending on the Hi-Lift jacks, reliable though they are.

And an action sequence:


For keel removal, have you found the article by Greg Manning in the 2012-13 Bulletin?
Comfort for working aside, it is not necessary to raise the boat enormously high to get them out and it could probably be done with the lowest point of the keel just 2’ off the ground but Mike’s 1m sounds easier.

A crude facsimile of the frames used by Greg could be made using a jack. This photo shows a trolley track being used on the keel of A1 which enabled the keel to be dropped until nearly out of the box but not quite, and then rolled aft with the box holding the keel upright. It would be relatively simple to add a frame to hold the keel upright and allow complete removal. 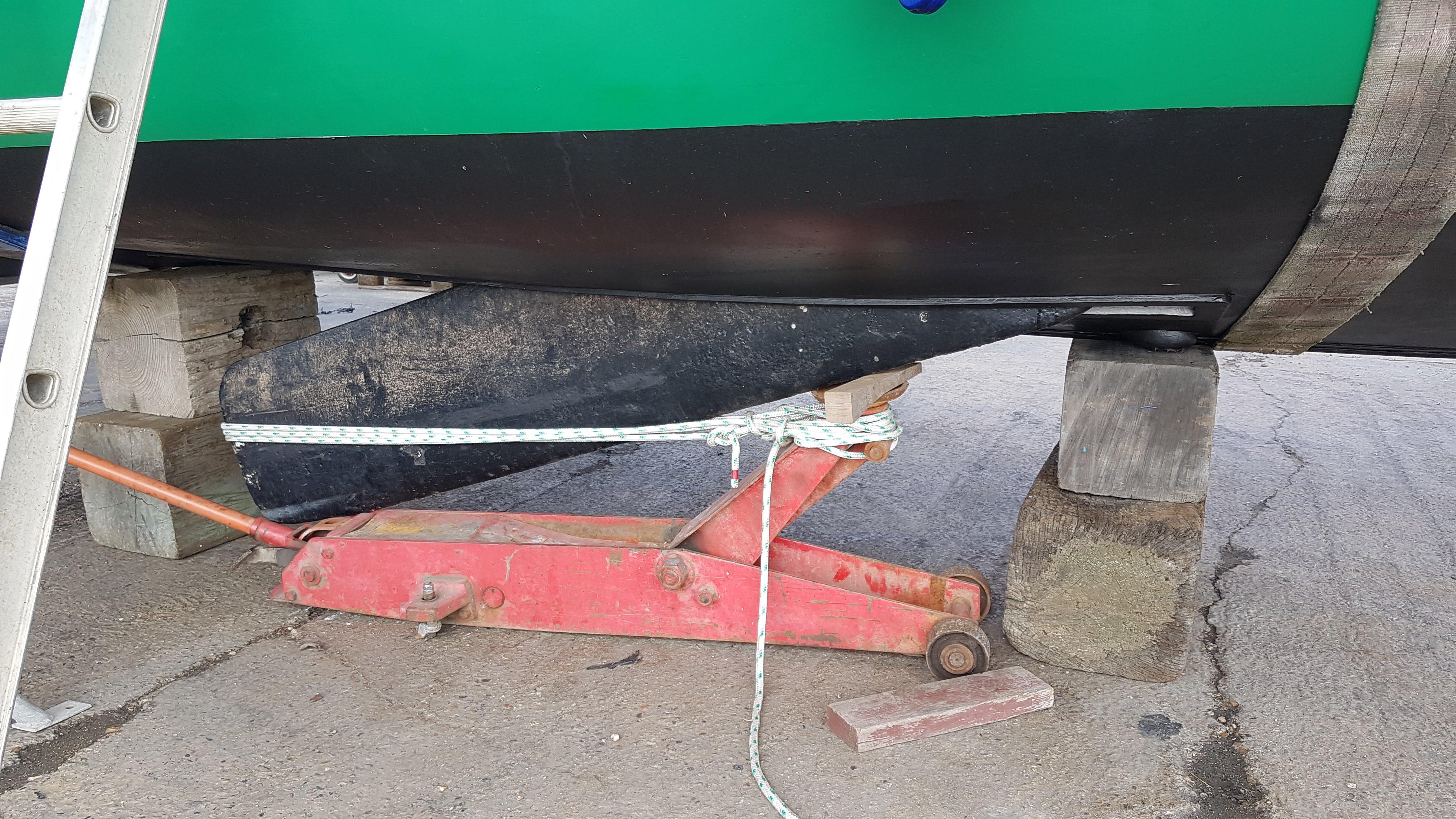 Lots of options!
Be safe, and try to rope in another Atalanta owner to help you.