The 2018 AGM was held at the Tamesis Sailing Club on the River Thames in Hampton Wick. It was an excellent day with a suitable mix of ‘business’ and pleasure, and the odd bit of wheeling and dealing going on in the margins.

Dan Houston, Editor of the excellent ‘Classic Sailor‘ magazine very kindly attended for lunch and presentation of the annual Trophies.

The usual review of finances (healthy) and appointment of Officers (largely continuing as for 2017) were conducted efficiently.  Members also discussed the current insurance position for the Association and voted in a revised Constitution.

Lunch and Catch Up

The Tamesis club house and choice of menu enabled a flexible approach to the lunch. There were tables and chairs for those who wanted them and planty of room to eat standing up for those that didn’t.  The Lasagne and green salad, prepared by Sally of Posh Nosh Dining, was delicious and there was plenty of it!   Over lunch and cheese and biscuits there was plenty of time for people to catch up on the previous season, talk Atalanta maintenance and generally enjoy the beautiful setting. 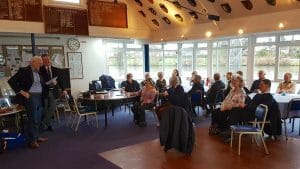 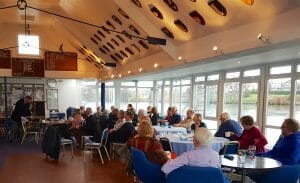 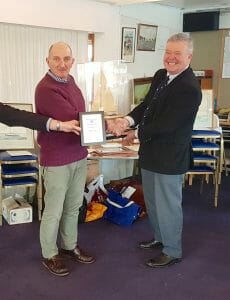 Atalanta Trophy – RIchard James, A89 Colchide, receives the wooden model of A12 for winning the East Coast Race. 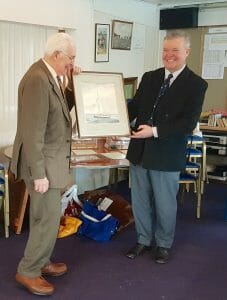 Sinclair Tophy – Colin Tywford, ex Commodore, Secretary and owner of A95 Hiran, receives the painting of A71 for services to the AOA.

After lunch our Commodore, Mike Dixon, called proceedings to order for the presentation of the annual trophies.  In the event only two of the Trophies could be awarded at the event as the other recipients had been unable to attend.  The Trophy winners are detailed below. (Read about the trophies and previous years’ winners on the AOA Trophies page.)

The Coupe Bernard Cup was awarded to Paul Jones for his write of his journey South in T4 Brother Jack.

Greg Manning was awarded the Odling trophy for his article on refurbishing A142 Sugar Plum’s decks.

Charles Currey Trophy – Most Adventerous Journey written up in the Bulletin

This trophy was not awarded this year as there were no logs published in the 2017-18 Bulletin.

This trophy was not awarded this year as there were no logs published in the 2017-18 Bulletin.

The John Searle for major boat restorations was awarded to George and Stephen for their work on T12 Harrier (ex Tilly-Ho).

Sinclair Trophy – for Services to the AOA

Dr Sinclair’s painting of A71 Blue Jackaroo, painted when he owned her, was awarded to Colin Twyford, who used to own A95 Hiran.  Colin was the Honorary Secretary from 1993 to 2005, during which he assembled much of the the boat histories now available on this site.  He became Commodore in 2006 and held this post until retiring from the role in 2017.

Atalanta Trophy – for winner of the East Coast Race

The wooden model of A12 was awarded to Richard James in A89 Colchide.  Fitting glory for Colchide’s first time at the event.   The race, which is run as part of the West Mersea Town Regatta, was written up in the 2017-18 Bulletin (see Bulletin page)

The location and event were so successful we plan to revisit for next year’s AGM. Saturday 2nd March 2019