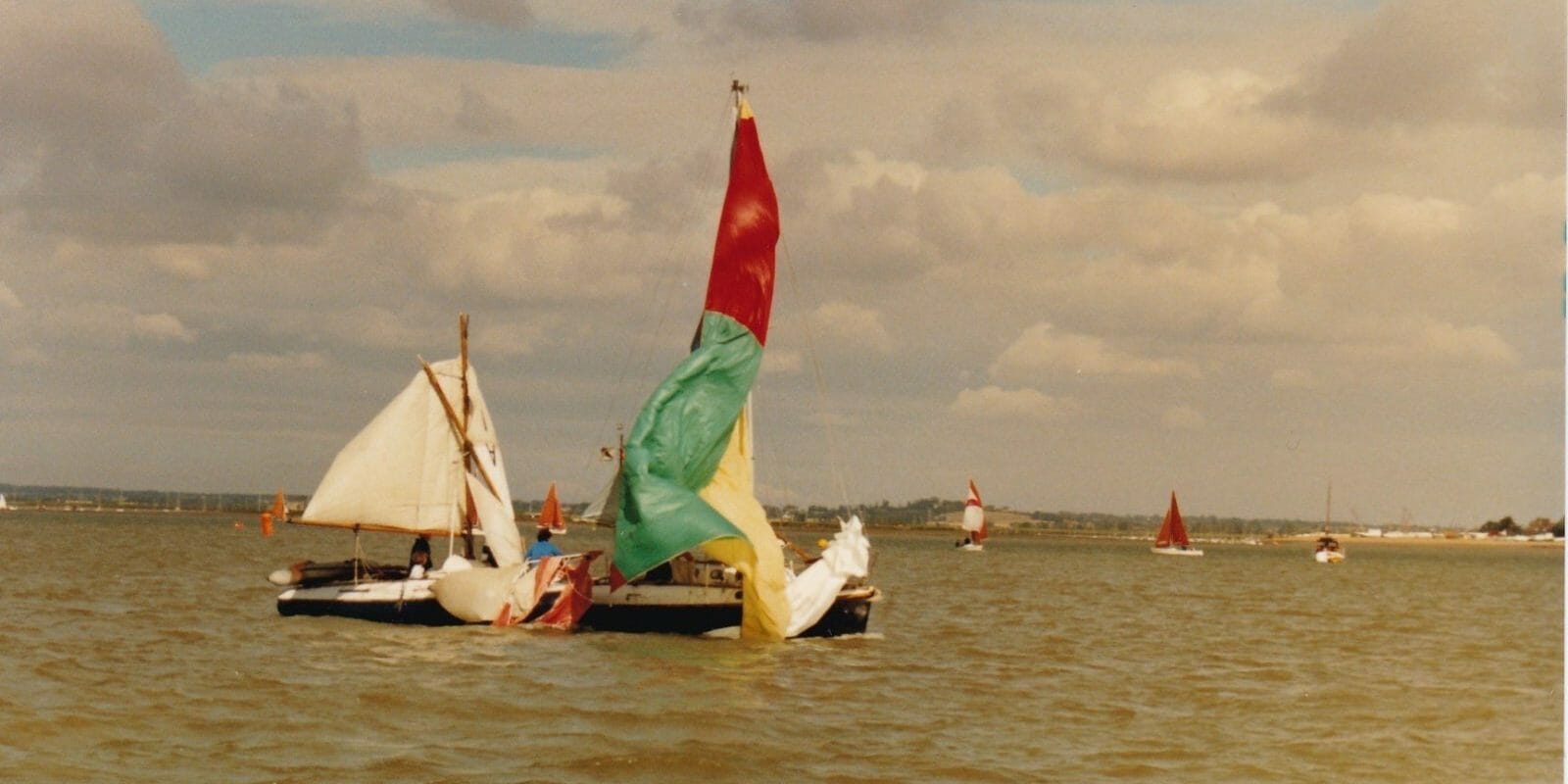 A1 “Atalanta” had been dismasted in 1987 and I’m grateful to Tom Stearn for the photograph of the aftermath. Although it’s difficult to be certain, it seems likely that the boat still had the running backstays at the time of the dismasting and did not have a fixed backstay(s). It would seem that the decision was taken to replace the running backstays with a fixed backstay when the new mast was built.

I stripped off all the rigging and fittings from the mast and boom so that the wooden spars could be thoroughly examined. With the exception of one small patch of soft wood, all was good. This small patch was repaired. All the spars were taken back to clean bare wood and then coated with seven coats of Deks Olje D1, followed up by seven coats of D2. The spars would appear to be the same dimensions – length etc. – as subsequent production boats.

As far as the standing rigging was concerned, I was almost sure that it was original. The exception was most likely to be the backstay, but even this was getting on for 30 years old. Disappointingly, most of the fittings had been attached to the mast with mild steel nuts and bolts. These had corroded and rusted significantly. As the true age of the standing rigging was unknown, I decided to replace it all. The decision wasn’t taken lightly as there was a serious cost implication, but given that (most, but not all) insurance companies insist that rigging be replaced every ten years, it seemed a prudent choice.

I had no way of checking the lengths of the shrouds and stays, but decided that it was most unlikely that anyone would go to the trouble of interfering with them. So having removed the old rigging, I took the lot down to Traditional Rigging in Bristol and discussed replacement options with them – though of course, in metric rather than the original imperial dimensions. It was decided to beef up the diameter of the backstay from 3 mm (!!!) to 5 mm.

The running rigging was again replaced – two hallyard wires led down the inside of the hollow mast – for the fore and main sails. The spare (spinnaker?) rope hallyard was led down through the hollow mast as well and there was an external rope topping lift. Some flag hallyards – one to the masthead and one each side to the spreaders – completed the job.

Mast fittings were incomplete. At some point the diamond-shaped plates which secure the lower shrouds to the mast, as well as providing a base for the sockets for the two spreader poles were missing, as was one of the three struts that go to make up the diamond spreaders.

With production boats, the main spreaders protrude from the mast at right angles to the fore and aft line; not so on A1, and the spreaders clearly were swept backwards – and not just a couple of degrees either. I had no plans to consult (there is only one general arrangement plan known to exist) so some detective work had to be employed. I knew that the cap shrouds started ¾ the way up the mast, came down through the ends of the main spreaders and onwards to be secured to the shroud plates. I also had a Fairey Marine sales ‘flyer’ showing the rig. By taking some careful measurements from both these sources, I came up with a mean of 28 ½ degrees swept back spreaders. I called it 30 degrees. I also wanted the spreaders to have a slight upwards tilt such that the spreader bisected the angle between the upper and lower portions of the cap shrouds. 5 degrees looked about right. Once I had the angles, getting the diamond-shaped plates fabricated, with the spreader sockets at the correct angles, was straightforward. The spreaders themselves were sourced from the internet, the only decision from me being how long to make them. They look about right.

Getting the diamond spreader strut made was a case of the internet again. Sadly, the fabrication used on production boats was not suitable.

There was a flimsy stainless steel crane fabrication at the top of the mast. I had a new sturdier one made up and it takes the diamond shrouds and the backstay and has been designed to accommodate an all-round white light and a VHF aerial.

I was able to use all the other fittings and they were refastened to the mast with stainless steel nuts and bolts.
It all fitted well – see photos of the first test mast raising in Market Harborough here.

The sails which arrived with the boat were very tired, the main with patches and frayed edges, and badly discoloured. I decided, quite easily, that the boat deserved a new suit of sails. Originally, A1 would have been fitted out with cotton sails and whilst it would have been ideal to have replacement sails made from cotton, the every-day practicalities suggested otherwise! I consulted Mark Butler of James Lawrence Sailmakers and between us decided upon cream coloured ‘Dacron’ made up from narrow 9” wide panels. The only snag was that Mark Butler insisted that he measure the boat with spars, rather than make a new suit of sails using the old suit as patterns. So it was that the incomplete boat was taken over to Brightlingsea so that he could take the necessary measurements. But it did test the trailer! Read about the fitting here.

The new sails arrived just in time for the AOA60 celebrations at the Suffolk Yacht Harbour at Levington. And they fit perfectly and look good! 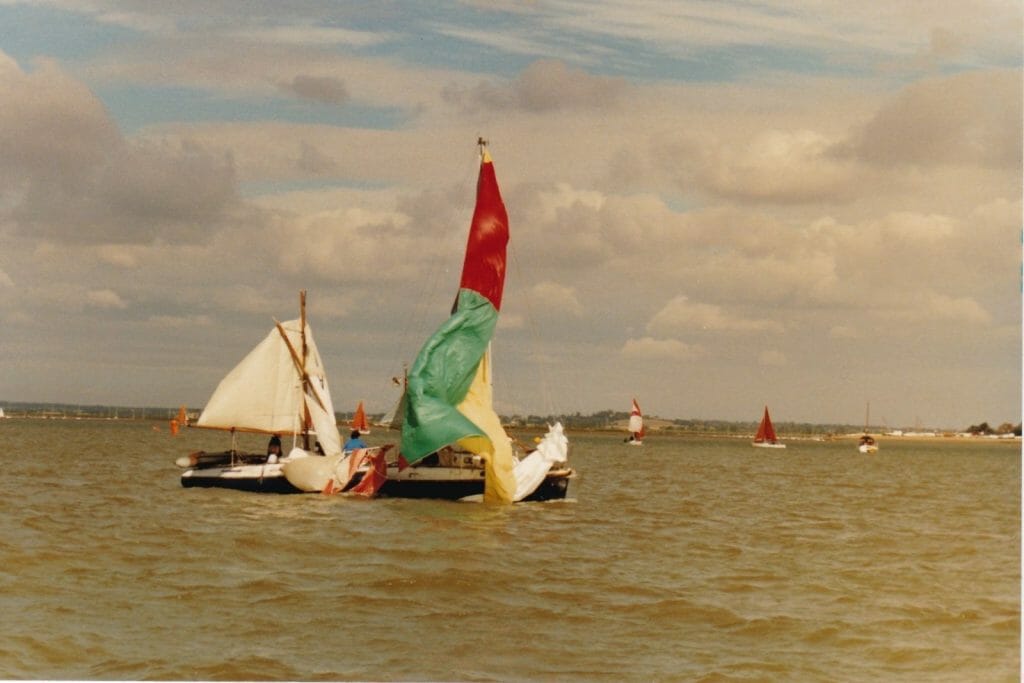 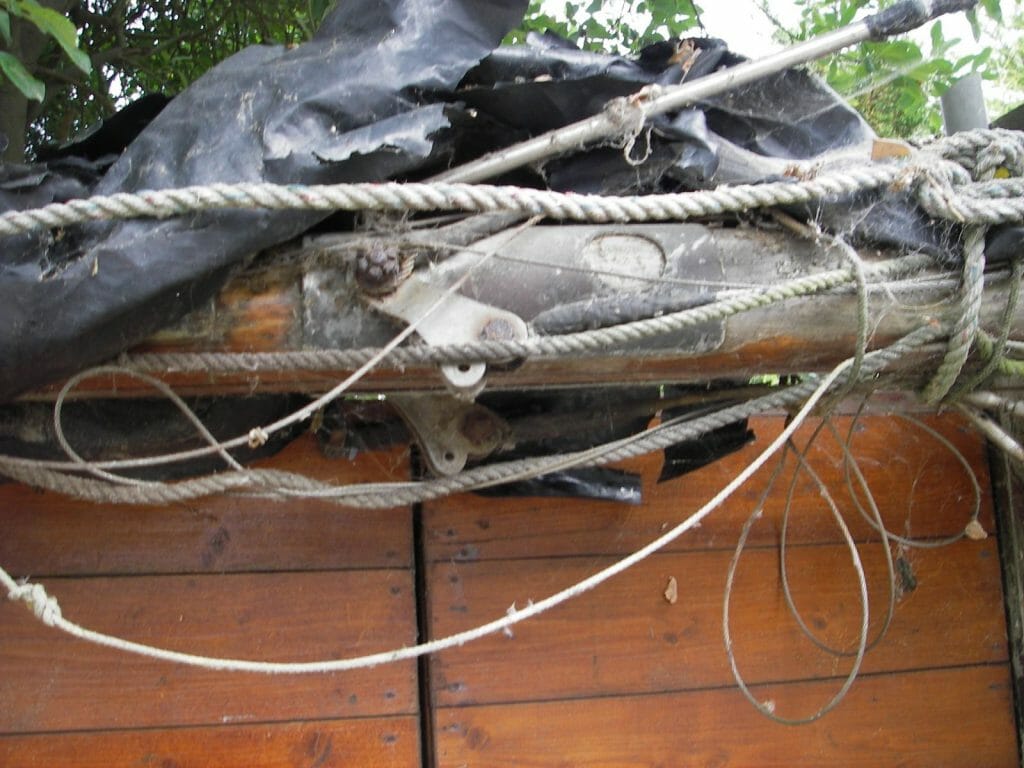 A1 14.2 As seen at Point Clear – mast fitting for forestay and two cap shrouds. Note the tang with holes where the running backstays were attached 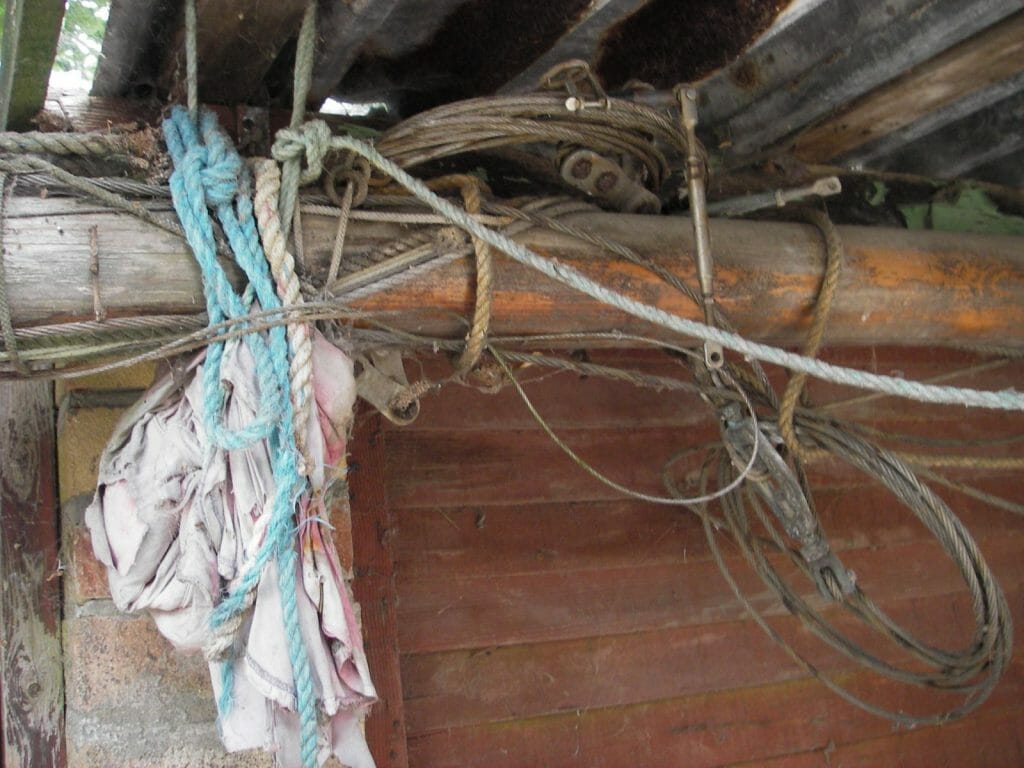 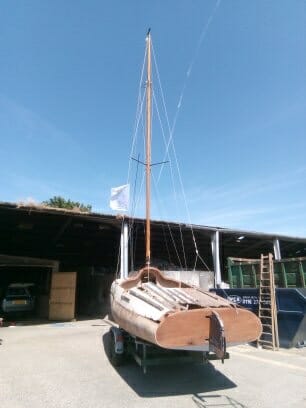 A1 14.4 Trial mast erection to check the new rigging is correctly sized 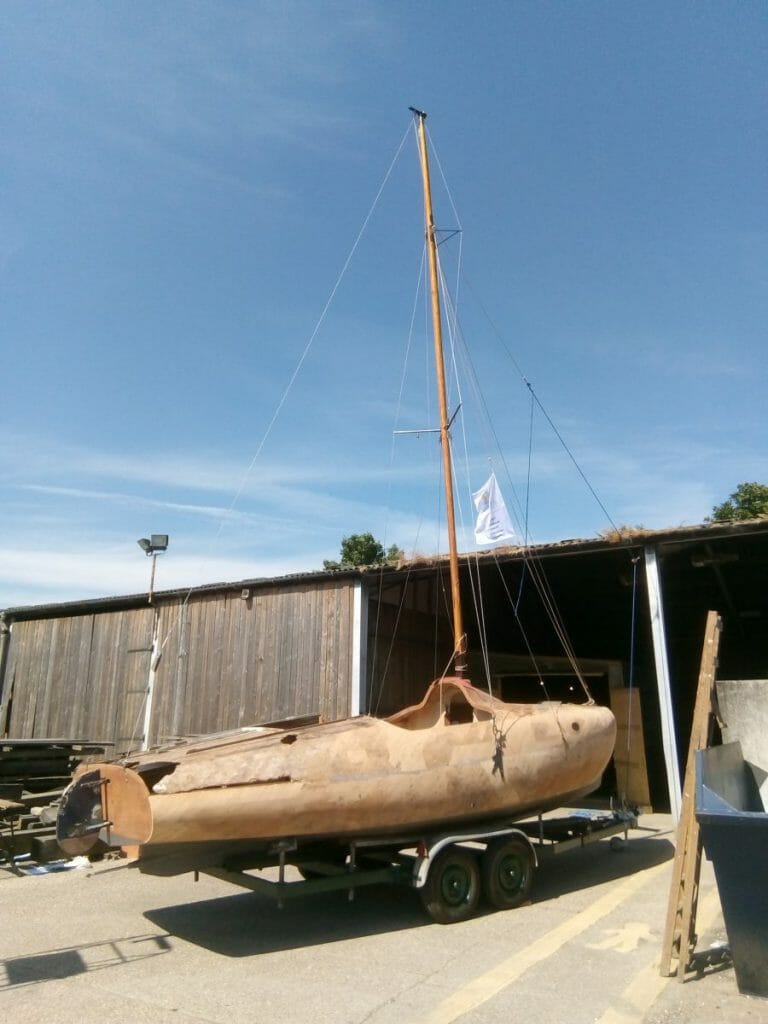 A1 14.6 Trial mast erection, showing that there are still many repairs to be done on the bare hull 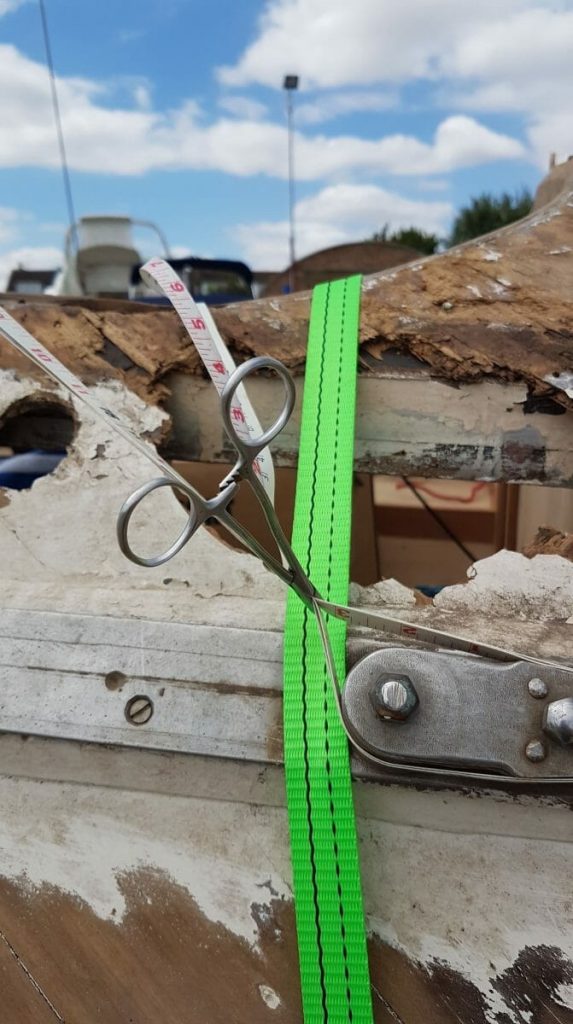 A1 14.8 Measuring up at Brightlingsea – Sailmaking meets Medical as medical clamp used hold tapes in place 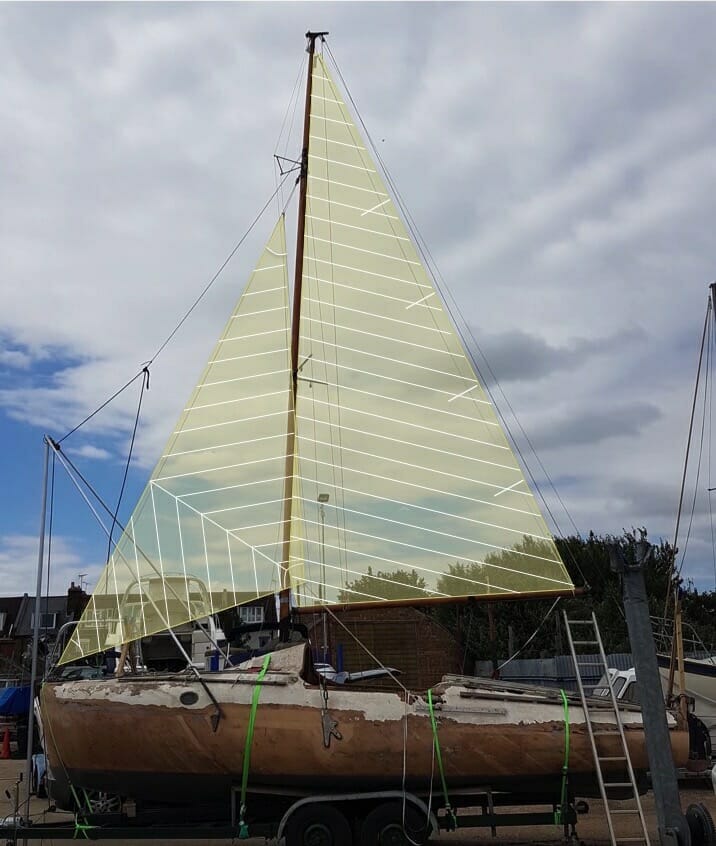 A1 14.9 Amateur interpretation of the Jimmy Lawrence measured sail plan 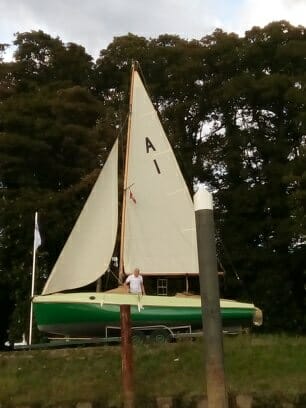