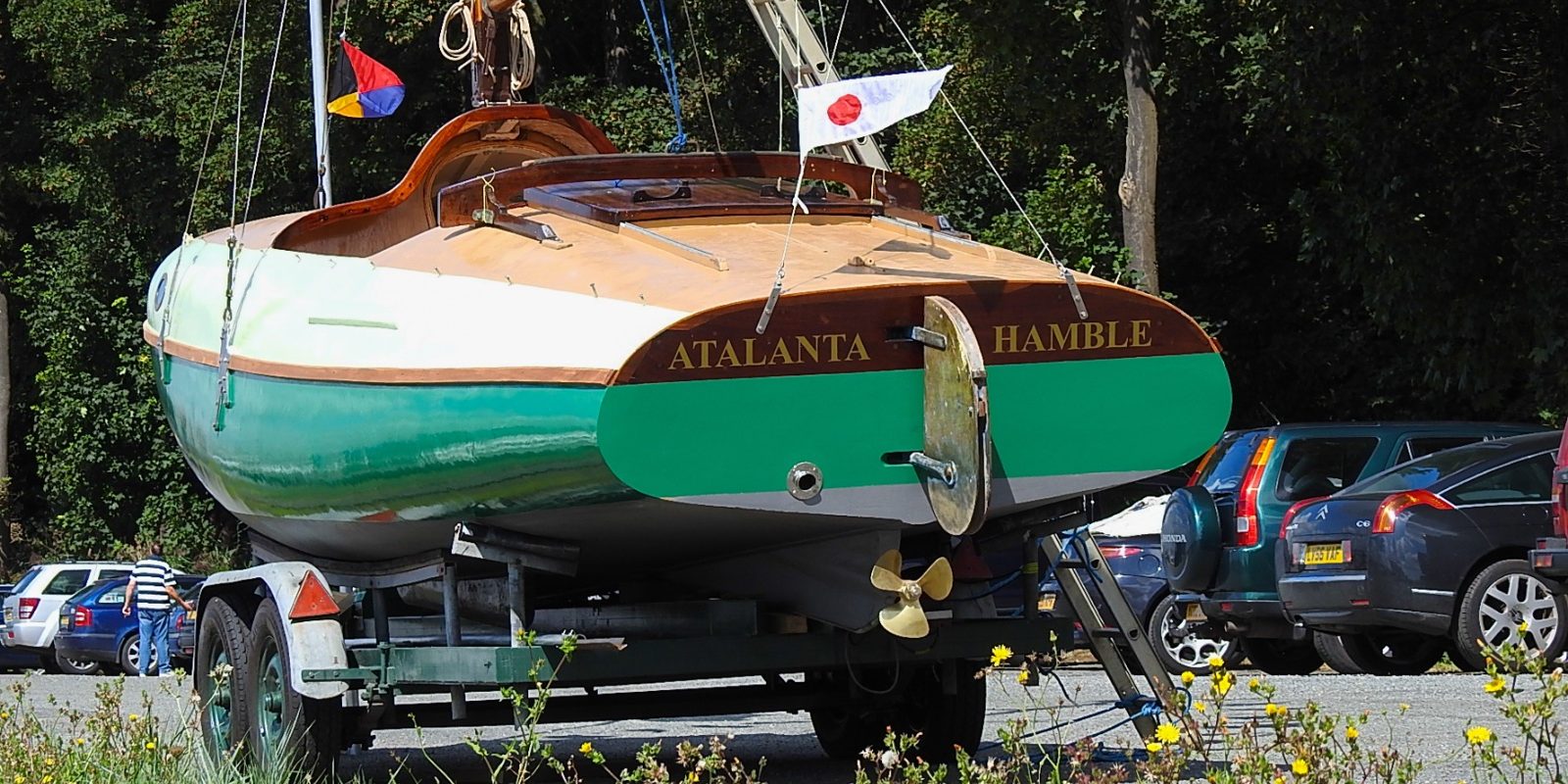 I took on the restoration of A1 ‘Atalanta’ in 2016. This post begins a series in which I will document the work done, in text and photographs. There has been an extraordinary interest in A1’s progress. Many thanks to all who have expressed interest.
Your questions have been numerous, but a few themes have emerged……………
“How long has it taken you?
“How have you done it?”
To the rather less flattering…………
“Are you mad?”

And let’s not forget to thank all those who have given freely of their time and expertise – all of which has spurred me on and given much needed encouragement.

This series of posts (index on the right) try to answer some of the questions, but to answer the last question first – no, I don’t think I’m mad, but at times I have doubted my sanity! I’m a not-particularly-gifted amateur and I’d like to think I recognise my limitations. And I think therein lies the heart of the matter. Anyone with a modicum of basic skills, coupled with a desire to see the finished product, is capable of achieving maybe not great things, but certainly good things.

Very early in the restoration process, I was reminded of two aphorisms

In my case, the first was crucial; I have always had in my mind’s eye sailing the finished product. As to the second; hogwash! Rose tinted spectacles doesn’t even begin to describe the initial optimism. Double or even treble the initial budget and anticipated timescale.

Has it all been worth it?

First thing to say is that the restoration is by no means over yet. There is still much to be done. I would recommend that when you become bored with a specific aspect of the restoration, stop for a while and move onto something else. Which is why jobs like the refurbishment of the mast and rigging, the trailer, the rudder blade all helped in keeping up the momentum and split up long periods of veneering.
After several weeks away from the project, I’m just about ready for the final push over the coming few months. All being well – and I really am serious, 2019 will see “Atalanta” sailing once again after an absence of almost thirty years.
Secondly, seeing her as I did, neglected and un-loved as she was, my initial thought was that the kindest option was to set a match to her. But this is where the heart overruled the head. I knew she was unique – one-of-a-kind – the prototype – the fore-runner – part of yachting history, and had to be saved, at the very least as a museum piece, but so much better if she were to be restored and sailing again.

So here we are – about two thirds the way through the project.

I hope you find the posts which follow useful.  The second post is available now and the others will follow roughly one per week.  And, with a bit of luck, there will be more to follow once the project is complete.

I don’t claim for one minute that I have the knowledge, skills or attitude to suggest that I’m in any way competent, but I seem to be muddling through somehow! But if I can do it, then so can you. Go on – give it a go – you know she’s worth it! 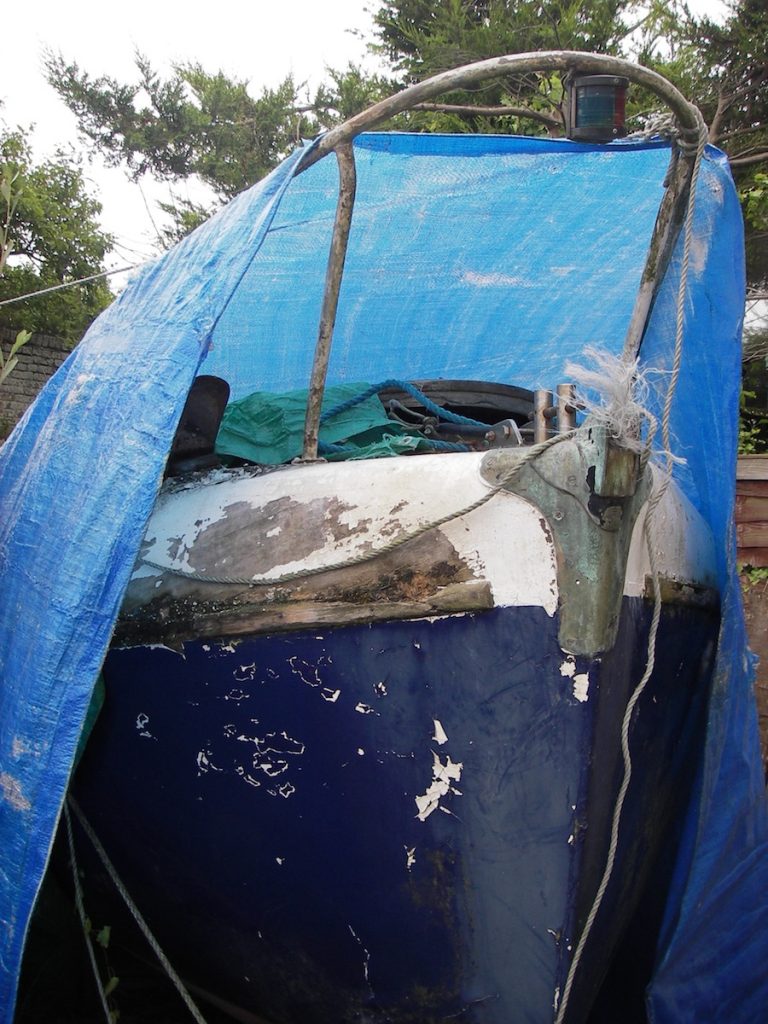 A1 1.1 As seen at Point Clear – pushpit not original and has been removed 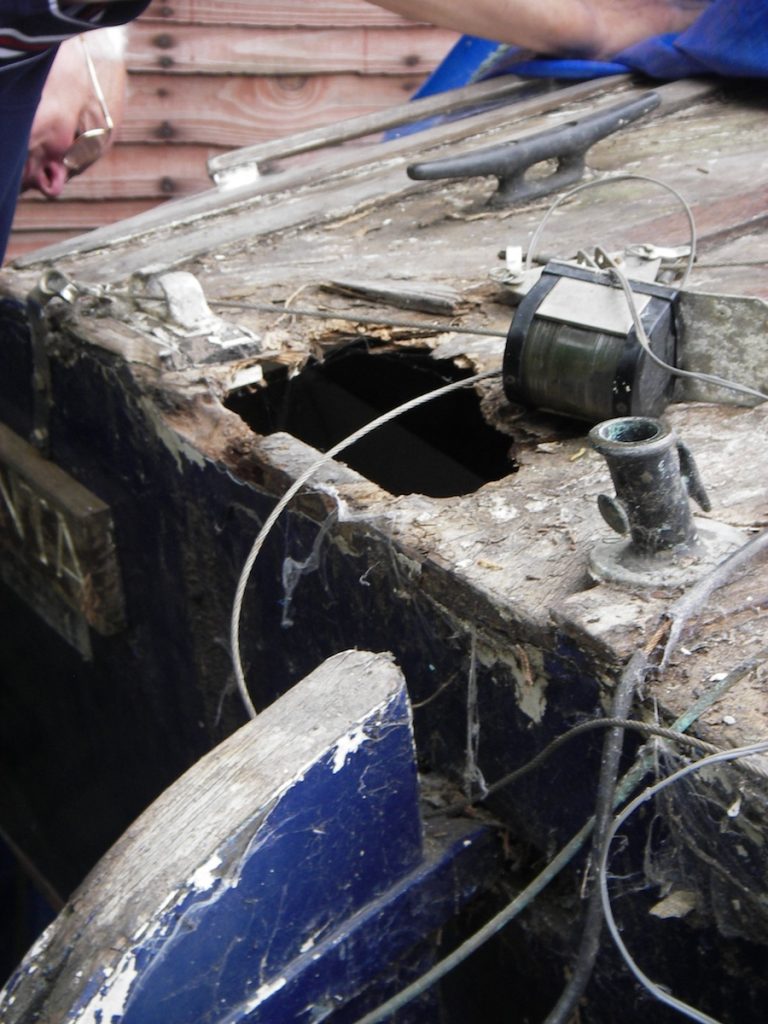 A1 1.2 As seen at Point Clear – the aft deck to transom joint on the port side 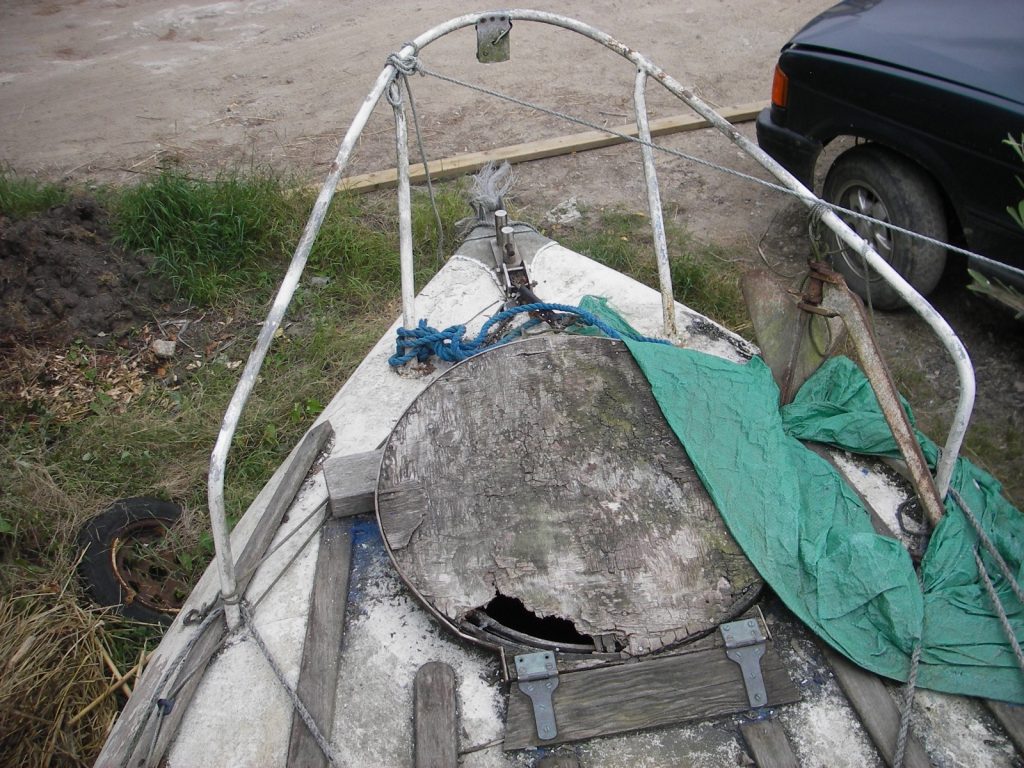 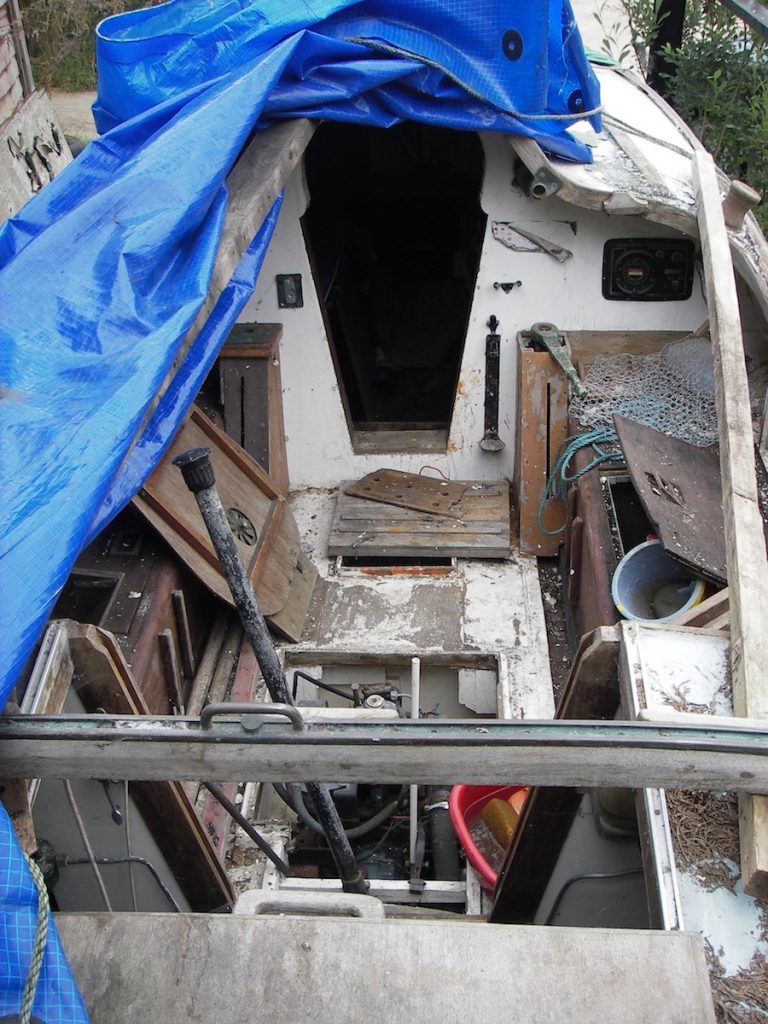 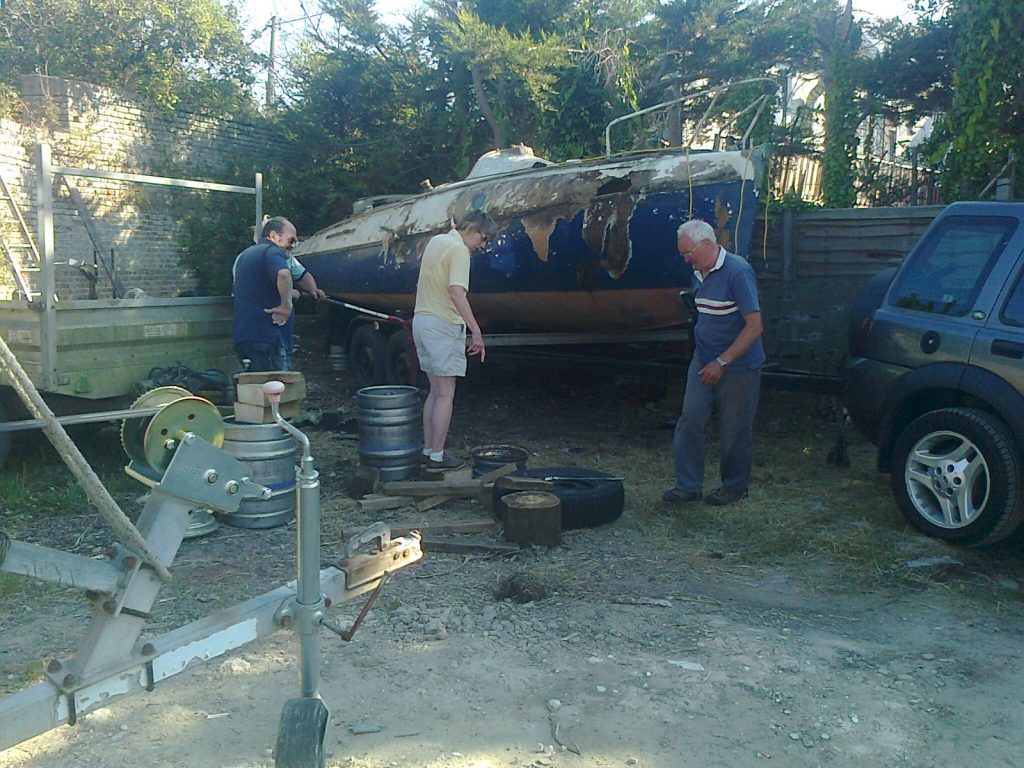 A1 1.5 Recovering A1 from her home of about 25 years at Point Clear 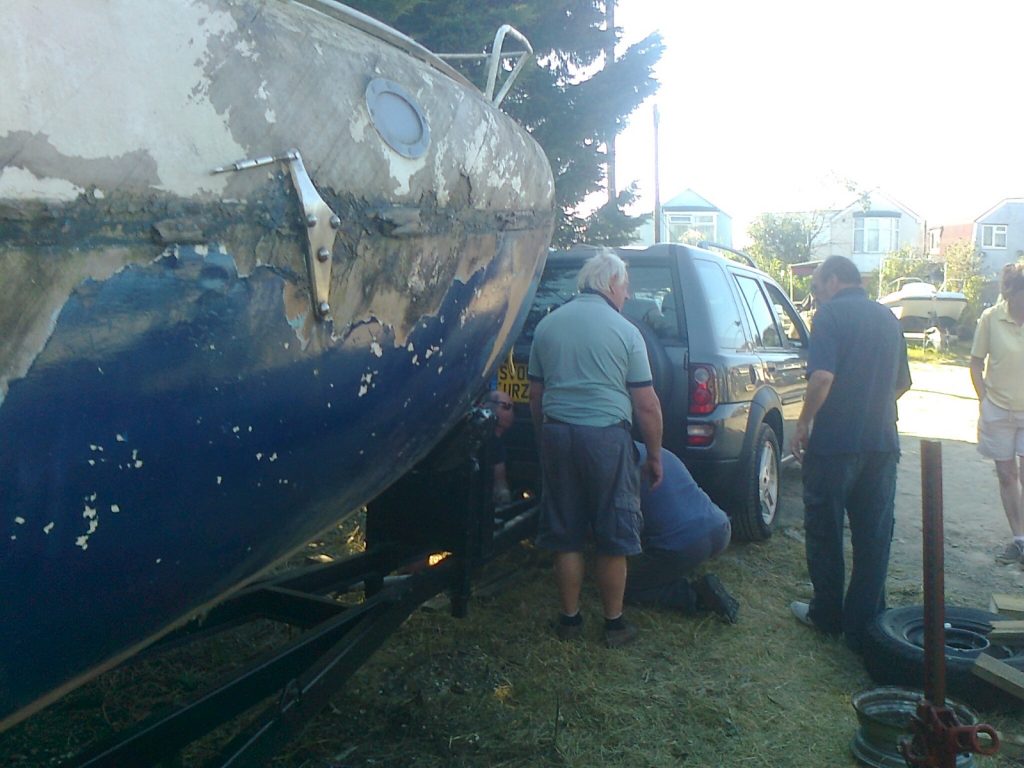 A1 1.6 A1 being transferred onto her ‘transfer’ trailer at Point Clear. Rubbing strake (or lack of it) and hull damage and rot at starboard bow clearly visible 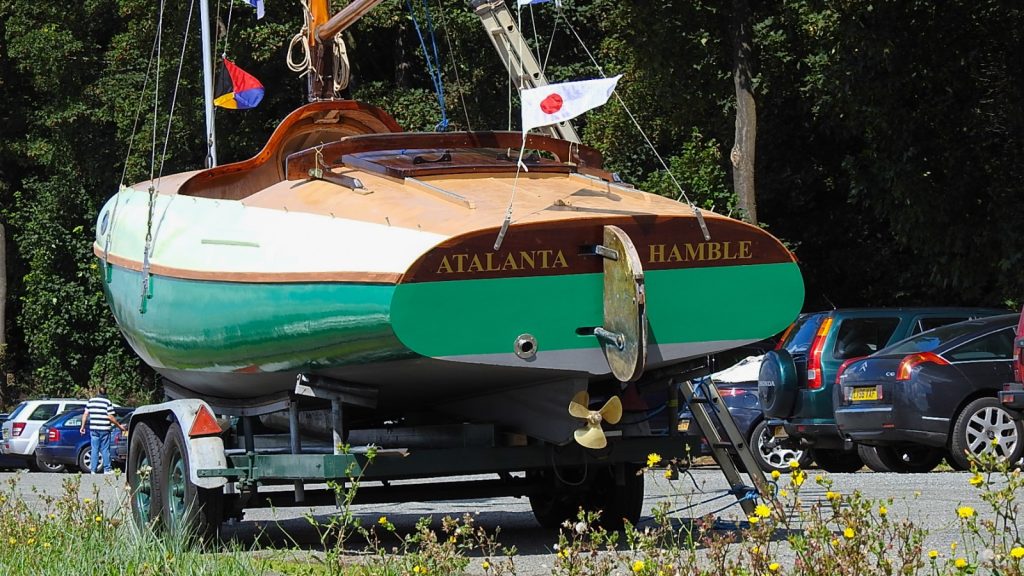 A1 Not a straight line in her, accentuated by this view from the stern 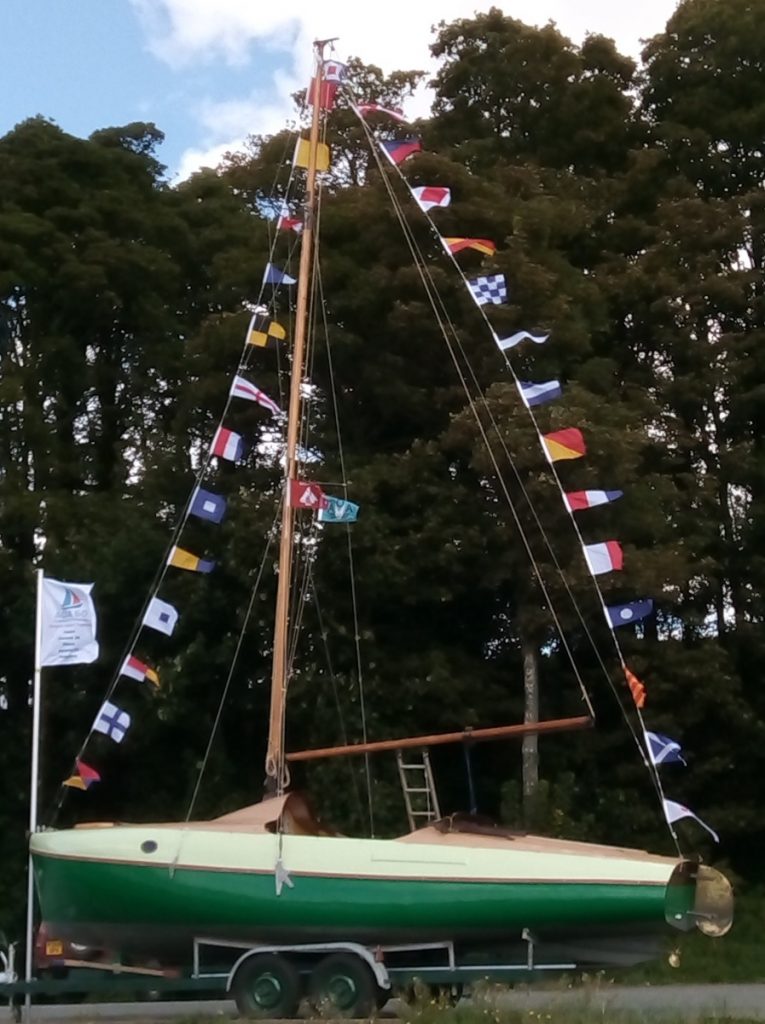 Published detail - read about it now