After much head scratching I have opted for a simpler solution than the SAAB.  The BMW mini convertible has a simple two ram solution without solenoids.  Simply the motor goes one way the rams go out, reverse the connections and they retract.  This arrived as a complete unit with the rams attached so I can see them working.  This does not solve the clutch problem but I guess a bypass valve can be gained at a later stage.  For now I can focus on the relationship between the compass and the rudder.  By swapping the connections on one ram it will retract whilst the other expands.  You can see from this picture of Mary that I can attach one ram to each rudder (having two).  I should be able to hide the motor and other electronics out of earshot. 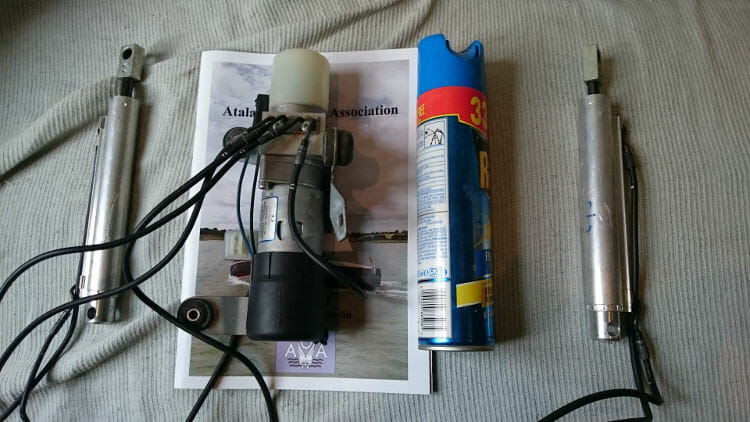 I have most of the electronics now, it is arduino based and I have to admit it is not as effortless as I would have wished.   Certain libraries have been compiled with certain versions of the arduino tools and need rework to work with later versions.  I am arguing with the GPS at the moment.

ArduIMU £50 ( this is the compass and other movement sensors, have a look on youtube )

Looking at it that way does look like a fools errand.  Particularly when you consider that I will need to implement a bypass valve.  I also have risks, the rams might not be fast enough…  But I have tested most bits in isolation and think it is looking OK.