I have just packed up the hydraulic rams with the brackets I have had made out of 3mm stainless.  So if I have done my maths we should be fine mechanically.  I will need to make up a wooden base plate which attached to the top of the old centre rudder stock. 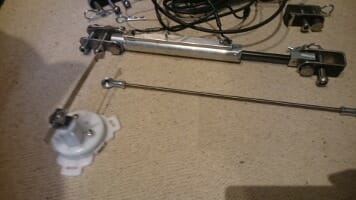 The electronics took a bit of a turn when fear of dropping the phone got the better of me.  I bought a pebble.  For those not familiar it is a ‘smart’ watch.  Where in this case its intelligence is mostly in keeping it simple.  It has a persistent display.  I think it is a sharp memory LCD and not exactly an e-ink in the style of the book readers.

The benefits to sailing are that the display is always on and is readable in the sun.  Unfortunately the choice of poly-carbon means that it is not exactly polarised lens friendly.  But better than an LCD at the wrong angle.  Also the big buttons are easier to use than a touch screen when your hands are wet.  The thing that surprised me a bit is how light it actually is.  It isn’t that difficult to write code for the phone as it is well integrated into the phone.  In fact I had a working prototype in a Sunday afternoon.  It has taken me days to bring it up to what you see below. 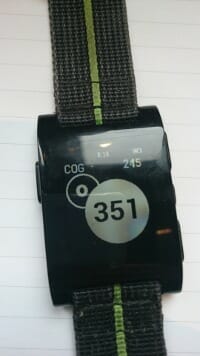 The way I have ‘designed’ it is that up and down keys go up and down by 10 units.  The autopilot has 3 control modes compass, GPS (COG shown) and Rudder.  The method is chosen by the phone app by virtue of the last setting configured.  This is reflected on the watch as the figure top right, the wanted direction.  The large figure is the actual measured value.  So that would be rudder position or bearing of some form.  The text top left is the controller chosen.  The number in the outer circle is the speed over ground.  I have changed the font since this picture to try to get 3 digits in.  The pebble really just acts as a remote control for the phone.  There is another neat trick I should do something with.  It is a good MOB alarm.  All tied in I can turn to wind if the watch gets disconnected from the phone.  I just don’t know where the wind is yet…